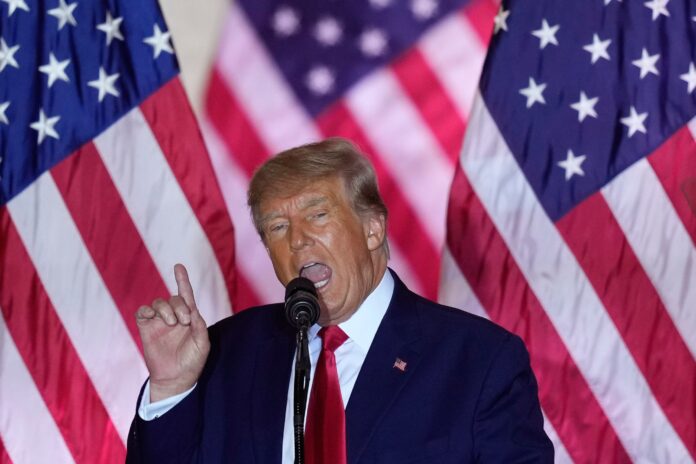 Donald Trump looped Arizona Republican Kari Lake into a conspiracy-ridden spiel about the integrity of the state’s election results on Wednesday.

Lake, however, had disproved one of the former president’s claims just weeks ago.

Trump claimed on his Truth Social platform that there was a large number of voting machines in Arizona’s “Republican areas” that were “BROKEN” on Election Day, part of a conspiracy theory that Lake peddled on Twitter earlier this week, Mediaite noted.

The claim comes as the Trump-backed Lake hasn’t conceded in the state’s gubernatorial race despite her Democratic opponent Katie Hobbs’ win earlier this month.

Trump, later in his post, attempted to sell Lake’s conspiracy theory to his followers by bringing the election-denying candidate into the heart of his unfounded claim.

″[Voters] left the voting lines in complete exasperation, unable to return. When ‘mechanics’ went in to fix the machines, they got worse. Kari Lake couldn’t even vote in her own district,” Trump wrote.

He continued: “Voter fraud – DO THE ELECTION OVER, or declare Kari, Blake [Masters], Abe [Hamadeh] the winners. Act Fast!!!”

Trump’s claim that Lake couldn’t vote in her district, however, has been debunked by the candidate herself, who has already said she traveled to a different area and had no problems.

“We switched from a Republican area to vote, we came right down into the heart of liberal Phoenix to vote because we wanted to make sure that we had good machines,” Lake said on Election Day.

“And guess what? They’ve had zero problems with their machines today. Not one machine spit out a ballot here today, not one in a very liberal area.”

Voting sites in Arizona’s Maricopa County did experience printing issues which stopped the counting of some ballots, however, those issues were not limited to areas that tend to vote Republican or Democrat, the Associated Press found.

Voters were able to try another tabulator at sites, cancel and go to another site to vote or put their ballots in a box that would be brought to and counted at Maricopa County’s tabulation center later.