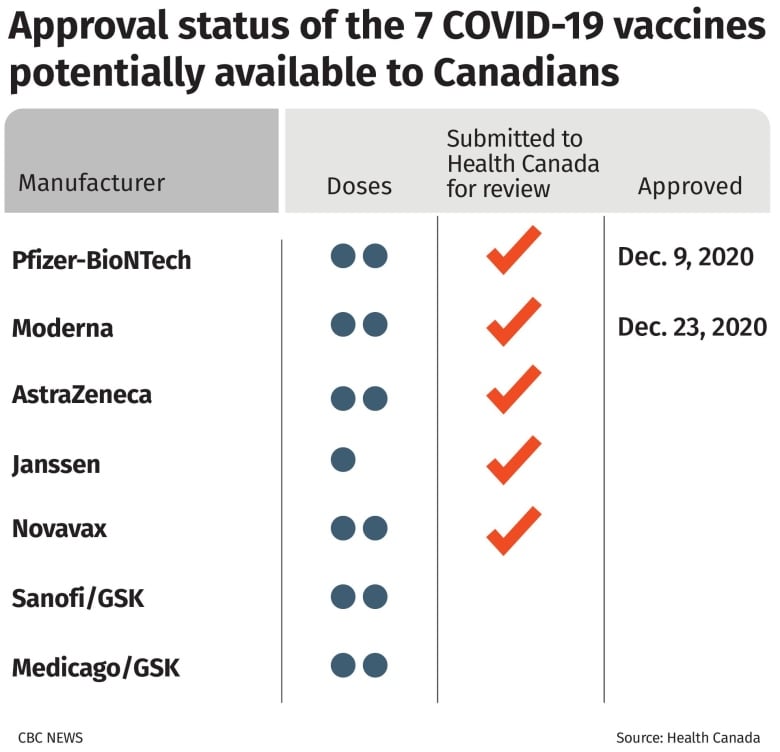 We’re answering your questions about the pandemic. Send yours to COVID@cbc.ca, and we’ll answer as many as we can. We publish a selection of answers online and also put some questions to the experts during The National and on CBC News Network. So far, we’ve received more than 67,000 emails from all corners of the country.

Are the vaccines effective against all the variants of concern?

Both Pfizer-BioNTech and Moderna say their COVID-19 vaccines appear to be effective against two variants of concern first identified in the U.K. and South Africa, based on blood samples from people who have been vaccinated. But more research is needed on the pair of vaccines, while other vaccine candidates already have some real-world data on their effectiveness against the variants.

The good news is the coronavirus that causes COVID-19 doesn’t seem to mutate as much or as quickly as the influenza virus that causes the flu. Even with the current, more transmissible variants of concern, people who’ve been vaccinated are not falling severely ill or dying from COVID-19 in large numbers.

But to prepare in case that starts to happen, drugmakers are already re-working their vaccines.

Phil Dormitzer, one of Pfizer’s top viral vaccine scientists, said last week that his company has already made a template for a prototype vaccine targeting the variant first identified in South Africa.

The re-tooling work took on new urgency after South Africa paused its rollout of the AstraZeneca vaccine after data from a small trial suggested the vaccine did not protect against mild to moderate illness from the B1351 variant now dominant in the country.

Despite that, Dr. Zain Chagla, an infectious disease physician at St. Joseph’s Healthcare in Hamilton, Ont., told Dr. Brian Goldman of CBC’s The Dose that he remains optimistic the existing vaccines can fight the coronavirus variants. That’s because five different vaccines have been submitted to Health Canada for approval, Chagla said, and each may play a role in controlling the variants.

“The best vaccine is the one that’s administered,” Chagla said. “Every Canadian should be hopeful that they can get one of these vaccines, period.”

The clinical trials of both Moderna and Pfizer-BioNTech were completed before the variants of concern took off worldwide.

Dr. Noni MacDonald, a pediatrics professor at Dalhousie University in Halfax and a vaccine safety researcher, said as experts gain a more detailed and sophisticated perspective on how the COVID-19 vaccines work, they’ll also gain a better understanding of what types of protection they offer.

Studies suggest the AstraZeneca vaccine isn’t highly effective against the variant first identified in South Africa. Do we know how effective other vaccines are against it?

Yes, we do have some information about the other vaccines.

So far, three drugmakers — Johnson & Johnson, Oxford-AstraZeneca and Novavax — have data comparing how well their vaccines work against the B1351 variant first identified in South Africa.

The variant has a mutation that changes the shape of the viral spike protein.

As a result, lab experiments suggest the antibodies that our body produces have a harder time attaching to the spike protein, reducing the effectiveness of the vaccines, virologists say.

But infectious disease experts say the vaccines could still save lives amid B1351 cases by preventing admissions to intensive care from serious COVID-19, which reduces strain on our health-care systems — the goal of flattening the curve.

WATCH | Re-tooling vaccines to keep up with coronavirus variants:

New coronavirus variants won’t necessarily mean new vaccines or vaccine boosters are needed. And if adjustments are needed, they would take less time to develop than the original vaccines. 2:01

Preliminary data from Johnson & Johnson’s single-dose vaccine suggested it was 72 per cent effective against moderate to severe COVID-19 in the U.S. compared with 57 per cent effective in South Africa, where a more contagious variant was circulating at the time of the research.

In a news release, Novavax said the efficacy of its vaccine in studies from the U.K. was 89 per cent compared to 60 per cent in South Africa.

Protection can refer to not getting the infection as well as protection against severe infection, hospitalization and death.

“So, while it isn’t perfect, while it isn’t the same, Johnson & Johnson, Novavax and very likely Pfizer and Moderna still provide some element of protection against that variant of concern,” said Bogoch, who is also a member of Ontario’s COVID-19 vaccine distribution task force.

We’re hearing the variant first identified in the U.K. can be more deadly. Is this across all age groups?

“Based on the limited evidence we have, it does seem to be across all age groups,” Maria Sundaram, an infectious diseases epidemiologist based in Toronto, told CBC News Network.

In January, British Prime Minister Boris Johnson said two studies presented to his government suggested the B117 variant “may be associated with a higher degree of mortality.”

Patrick Vallance, Johnson’s chief scientific adviser, said the previous average death rate of 60-year-olds in the U.K. from COVID-19 was about 10 per 1,000. With the new variant, roughly 13 or 14 per 1,000 infected people might be expected to die.

The relative increase in the case fatality rate “appears to be apparent across age groups,” the researchers wrote. “The absolute risk of death per infection remains low.”

Do you anticipate we’ll need booster shots to protect against variants even after we’ve received both doses of a vaccine?

The answer is yes, said Bogoch.

For the first-generation of COVID-19 vaccines, Bogoch said he expects people will eventually need a booster dose.

“Down the line, and I am not sure how much farther down the line, we’d likely need a booster dose with a vaccine or an updated vaccine that accounts for the new variants of concern that are emerging,” he said.

MacDonald said major regulators such as Health Canada, the U.S. Food and Drug Administration and their counterparts in the U.K. and Europe are meeting virtually to discuss how to evaluate the effectiveness of vaccines against variants.

She said the regulators may ask drugmakers for what are called non-inferiority studies.

Unlike clinical trials to evaluate the efficacy of a vaccine that involve 40,000 to 50,000 people, MacDonald said non-inferiority trials need 400 to 500 people and can be done relatively quickly.

“We’ll do non-inferiority,” MacDonald said. “That is a simpler, easier process and it’s just saying, ‘Are you good if not better than what you had before?'”

Alyson Kelvin, a virologist working on COVID-19 vaccine candidates at VIDO-InterVac in Saskatoon, said surveillance in Canada and around the world will be important to see what variants people are commonly being infected with, both in vaccinated and unvaccinated populations.

“I am optimistic that we’ll still have effective vaccines and we won’t get into as frequently a cycle of vaccination and changing the vaccine formulations as we do with influenza,” Kelvin said.

When someone is infected with the original version of the virus and they develop antibodies, those antibodies have been shown to be less effective against some new variants of concern with altered spike proteins.

Researchers have documented cases of reinfection with the variant first identified in Manaus, Brazil. But reinfections are difficult to prove since doctors need genetic proof showing a distinct coronavirus strain caused each instance of infection.

Our bodies generate antibodies to fight off a natural infection. Besides antibody-based immunity, our immune system also has T-cell immunity, or cell-based immunity. T cells are a type of white blood cell.

Kelvin said cell-based immunity is often broader than what we get from just antibodies.

Kelvin said it will be important for researchers to watch for any breakthrough infections from a variant that suggest both arms of immunity are no longer effective.

Brian Lichty of the McMaster Immunology Research Centre in Hamilton, who is also working on COVID-19 vaccine candidates, said genes for the variants can be swapped into an existing mRNA vaccine, such as those made by Pfizer-BioNTech and Moderna.

“Technically, it’s really simple,” Lichty said. “I can, with my laptop, design a new vaccine in 20 minutes sitting on my couch.”

Then, in the lab, the new gene is synthesized. Finally, the new vaccine is mass manufactured — the step that takes the most time, he said.

Looking ahead, drugmaker GlaxoSmithKline (GSK) said it will work with the German pharmaceutical company Curevac to develop an mRNA vaccine against the variants.

The advantage of existing mRNA vaccines from Pfizer-BioNtech and Moderna compared with vaccines based on older technologies is they don’t need cells or tissue culture to grow. That’s one reason why it is easier to change recipes in their manufacturing lines to address the variants, MacDonald said.