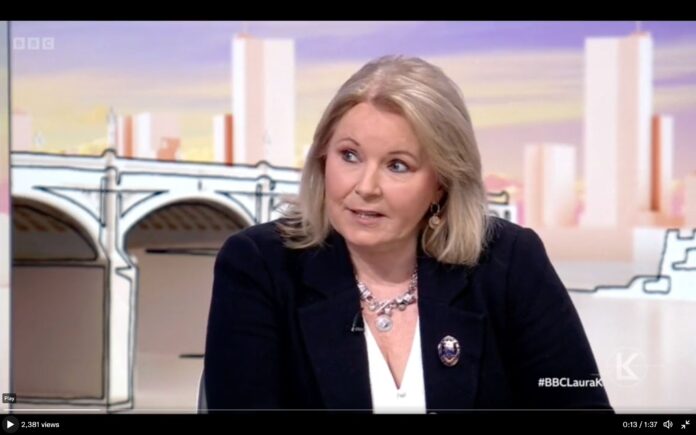 Union boss Pat Cullen says it is “despicable” that UK nurses are the “lowest paid in Europe”.

The general secretary of the Royal College of Nursing [RCN] said they were not “greedy people” and just wanted to “make ends meet”.

She made the comments ahead of the first-ever nurses’ strike next week on Thursday, December 15, and again the following week on Tuesday, December 20.

Pat Cullen(GS, RCN) – “The 1-day of action that nurses are going to take… hasn’t created the 7.2 million people sitting on waiting lists… & we are paying nurses the lowest possible wage we can.. it’s despicable that UK nurses get the lowest pay in Europe.. “#bbclaurak pic.twitter.com/CAXTLztVxe

Cullen told BBC’s Sunday with Laura Kuenssberg: “The one day of action that nurses are going to take hasn’t created the 7.2 million people in our waiting lists, the NHS has been in crisis for many, many years…what state would it be in if those nurses were not working those additional unpaid hours they do?

“Nurses aren’t greedy people. They are not asking for an incredible pay rise, they are asking just to be able to make ends meet.”

The RCN has offered to “press pause” on the planned strike action if health secretary Steve Barclay agrees to negotiate properly on pay.

The department of health said Barclay’s “door remains open for further talks”, but did not say whether pay would now be on the table.

And in an editorial for the Sun on Sunday, Barclay criticized the planned strikes amid serious pressures on the NHS.

The strike will cause major disruption to the NHS in the run-up to Christmas, with ambulance workers also set to strike on December 21.

The RCN has said that despite this year’s pay award of £1,400, experienced nurses are worse off by 20 percent in real terms due to successive below-inflation awards since 2010.

The union has been calling for a pay rise of 5 percent above RPI inflation.

In response to the latest offer from the unions, a department of health spokesperson said: “These are extremely challenging times, we have accepted the recommendations of the independent NHS pay review body in full – this means newly qualified nurses have had a 5.5 percent increase and those on the lowest salaries, such as porters and cleaners, have received a pay rise of up to 9.3 percent.”