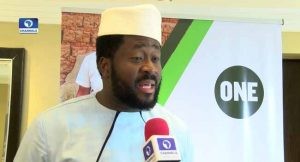 Actor, filmmaker and director Desmond Eliot who is also a lawmaker has continued to pursue his passion.

Despite his busy schedule as a member of the Lagos State House of Assembly, Eliot has a new project under the works.

It is a movie titled “Love Diamond” and it stars Femi Jacobs, Rotimi Salami and reality TV star Lilian Afegbai.

The movie, which is produced by Austin Nwole, follows the travails of a business man and his employees in their quest to rise above earlier disappointment in the pursuit of success.

In the course of his career, Eliot has won many awards such as Best Supporting Actor in a Drama at the 2nd Africa Magic Viewers’ Choice Awards, for his role in “Finding Mercy”. He also won the Director of the Year at the 2014 Best of Nollywood Awards for his efforts in “Apaye”.

The film maker who loves to give back to the society founded The Desmond Elliot Foundation, which focuses on providing clean water for rural and poor urban areas, in 2008.