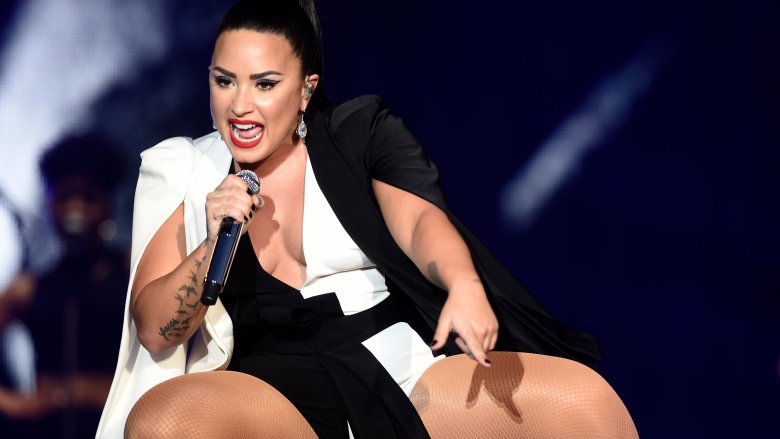 Demi Lovato has had enough with the Instagram filters. On Thursday, Sept. 5, 2019, the “Sorry Not Sorry” singer took to the popular social media platform to share her “biggest fear” — an unedited photo of herself in a bikini. Lovato wearing shades, looking over her shoulder and with her cellulite visible, says she is “unashamed, unafraid and proud” of a body that has “fought through so much.”

“And guess what, it’s CELLULIT!!!! I’m just literally sooooo tired of being ashamed of my body, editing it (yes the other bikini pics were edited – and I hate that I did that but it’s the truth) so that others think I’m THEIR idea of what beautiful is, but it’s just not me. This is what I got,” she wrote. “I want this new chapter in my life to be about being authentic to who I am rather than trying to meet someone else’s standards.”

The former Sonny with a Chance star is currently filming the Will Ferrell-penned comedy Eurovision alongside Rachel McAdams and Dan Stevens. She admits that the project is the first time she’s been in front of a camera where she’s not depriving herself or doing “some crazy diet s***.” Indeed, Demi Lovato seems to have really turned things around in 2019, as last year she suffered a terrifying drug overdose, which dominated headlines for days and weeks after the fact. Since her recovery, things definitely appear to be on the upswing for the pop-star.

“Anyway, here’s me, RAW, REAL! And I love me. And you should love you too! Now back to the studio. I’m working on an anthem,” she concludes the post. “Also, just so everyone’s clear. I’m not stoked on my appearance BUT I am appreciative of it and sometimes that’s the best I can do. I hope to inspire someone to appreciate their body today too. #nationalcelulliteday #celluLIT.”

This isn’t the first time Lovato has opened up about her body issues. In 2011, during a sit-down interview with ABC‘s Robin Roberts, the then 18-year-old singer revealed she was a victim of bullying due to her weight. “I developed an eating disorder, and that’s kind of what I’ve been dealing with ever since,” Lovato explained. “I was compulsively overeating when I was eight years old,” she said. “So, I guess, for the past 10 years I’ve had a really unhealthy relationship with food.”

The dangerous coping mechanism stayed with her even while her star was rising. “I was performing concerts on an empty stomach,” she said. “I was losing my voice from purging. I was self-medicating. I was not taking medication for depression, and I literally was so emotionally whacked out that I took it out on someone that meant a lot to me.”

In her 2017 documentary, Demi Lovato: Simply Complicated, the “Confident” singer said that food is “still the biggest challenge in my life” and revealed that she relapsed after her breakup with Wilmer Valderrama in 2016. “When I was in a relationship with Wilmer I went three years without purging and when we broke up that’s one of the first things I did,” she said. “The less I have to think about food, the easier it is to go about having a normal life and I don’t want to let anybody down so when I do have moments when I slip up, I feel very ashamed.”

However, in more recent years, Lovato has become more outspoken on the topic self-acceptance and has fully embraced a body that society doesn’t deem “perfect.” In 2018 (via Teen Vogue), she shared an Instagram story to flaunt her cellulite, stretch marks, and other imperfections.

Her followers responded by pointing out that they could barely see any flaws, which prompted her to respond: “The boomerang smoothed out my legs. The point is, I have cellulite just like the other 93% of women do. What you see on Instagram isn’t always what it seems to be. Let’s embrace our real selves. #iloveme.”

In May 2019, she hit back at a publication that described her as having a “fuller figure.” Per The Independent, she wrote, “I am more than my weight,” in an Instagram story. “Unlike the past, I’m not triggered, I’m not upset that someone wrote a headline about my ‘fuller figure.’ I’m angry that people think it’s okay to write headlines about people’s body shapes,” she wrote. “Especially a woman who has been so open about being in recovery from an eating disorder.”

She ended with a piece of advice that everyone should heed: “Don’t listen to negative diet culture talk. You are more than a number on a scale.”