Demi Lovato on Would-Be Sober Anniversary: ‘I Needed to Make Those Mistakes’ 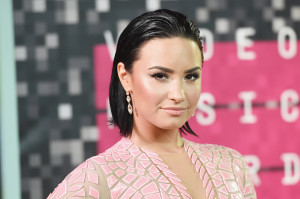 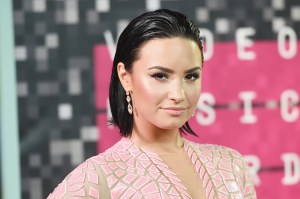 Reflecting on her growth. Demi Lovato would have been seven years sober today, but rather than bemoan the relapse she experienced in July, she’s taking it as a hard-learned lesson.

“Today I would’ve had 7 years sober,” the “Sorry Not Sorry” singer, 26, wrote on Instagram Stories on Friday, March 15. “I don’t regret going out because I needed to make those mistakes but I must never forget that’s exactly what they were: mistakes.” 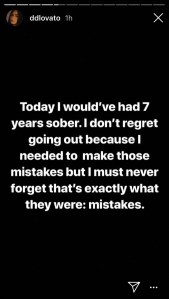 She continued: “Grateful that AA/NA never shuts the door on you no matter how many times you have to start over. I didn’t lose 6 years, I’ll always have that experience but now I just get to add to that time with a new journey and time count.” 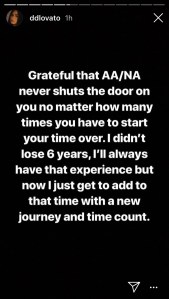 The Camp Rock actress concluded by encouraging those in similar situations to seek help. “If you’re alive today, you can make it back,” she urged. “You’re worth it.” 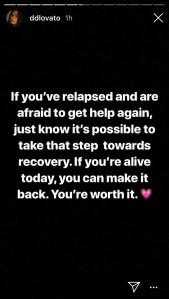 Two years prior, the Disney alum was singing a different tune as she celebrated her five-year sober anniversary. “So grateful. It’s been quite the journey. So many ups and downs,” she wrote at the time. “So many times I wanted to relapse but sat on my hands and begged God to relieve the obsession. I’m so proud of myself but I couldn’t have done it without my higher power (God), my family, friends, and everyone else who supported me. Feeling humbled and joyful today. Thank you guys for sticking by my side and believing in me.”

The two-time Grammy nominee was hospitalized after being found unconscious by paramedics in her L.A. home following a drug overdose in July. She headed to rehab immediately upon her release, where she remained for three months.

The musician celebrated six months of sobriety on January 25 with a cake from her team. “Demi is doing great and is in a much healthier place,” a source told Us at the time. “She is learning how to take care of herself better and put her needs first.”

Still, the Sonny with a Chance alum doesn’t consider herself “done” with treatment: Lovato briefly checked herself back into a facility recently. “It was Demi’s decision and she checked out after about two weeks. She is in a better head space and recognizes the seriousness of her addiction,” a separate source told Us.

A second insider added: “She at no point relapsed since last summer’s overdose.”

In addition, the “Confident” crooner, who split from boyfriend Henri Levy earlier this month, has been making a concerted effort to be kind to herself, even sending herself flowers on March 7.

“You’re beautiful, you’re loved, and you’re worthy of a happy and healthy life,” she reminded herself in the card. She captioned a photo of the bouquet: “’Cause sometimes you gotta send yourself flowers.”