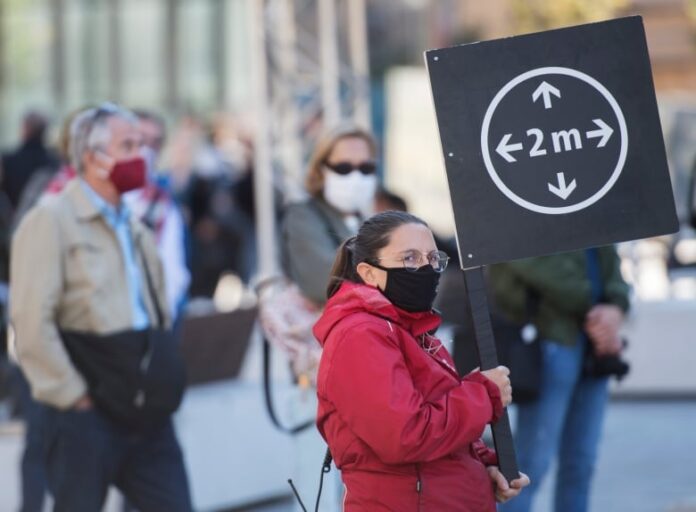 With cases surging in Ontario and Quebec hot spots, Trudeau on Friday implored people to adhere to public health guidelines, stressing that “what we do now will be critical for the weeks and months to come.”

Tam advised Canadians to downsize their social bubbles and reduce the duration of these encounters. “Every person you encounter brings their whole network of contacts with them,” she said on Twitter.

The repeated refrain came as political and public health officials took pains to tell the public it was time to scale back parties, dinners out, group activities and other individual actions they say have been contributing to the increasing caseload of the novel coronavirus.

In Quebec, Health Minister Christian Dubé told residents to a “make a special effort” to limit contact with other people for at least 28 days in order to contain spread and save hospitals from increased burden.

“I insist on this,” said Dube, nevertheless saying he had no problem with people dining in small numbers, within their bubble.

Health officials again urged Quebecers to resist unnecessary social gatherings as COVID-19 numbers continue to spike. But with warm summer expected this weekend, there is fear too many won’t listen. 1:56

Dubé said public health experts believe if the spread of the virus can be contained for two consecutive two-week stretches, the second wave of the virus will be better controlled.

The province reported 637 new cases of COVID-19 on Friday, the highest daily number since May 21. The province also conducted more than 36,000 tests, the most ever in a day.

Canada on Friday recorded 1,363 cases of the respiratory infection over a 24-hour period, the highest number since early May. Most cases are in Ontario and Quebec, but infections are also rising in Manitoba.

An increasing number of COVID-19 cases in Winnipeg involve people in their 20s who were out at bars, pubs and restaurants, Chief Provincial Public Health Officer Dr. Brent Roussin says. 1:04

As of Monday, Winnipeg and 17 nearby communities will be under new restrictions. Masks will be mandatory in indoor public places, and gatherings will be restricted to 10 people, inside and outside.

Meanwhile, Trudeau has announced the latest agreement to obtain a vaccine against the coronavirus, this one being developed by AstraZeneca and Oxford University. Canada now has deals in place to get millions of doses of six different potential COVID-19 vaccines.

Canada now has deals in place to get millions of doses of six different COVID-19 vaccines before any of them are proven or ready. It’s an effort to hedge bets in a high-stakes game to beat the virus. 1:35

“Canadians must have access to a safe and effective vaccine against COVID-19 as quickly as possible, no matter where it was developed,” he said in announcing the deal on Friday.

Also on Friday, the Liberals and the NDP reached a deal on sick leave, allowing the latter party to support Wednesday’s speech from the throne, thus preventing a fall election.

Surging numbers of new cases haven’t been joined by soaring COVID-19 patients in hospitals. But there’s a clear rising trend and those on front lines fear it could be just the beginning. 2:02

NDP Leader Jagmeet Singh said prior to Wednesday’s speech that his party would need to see the Canada emergency response benefit (CERB) extended and for paid sick leave to be offered to all employees across the country to prevent workers from being ill on the job.

Sources told CBC News that Bill C-2 will be changed to allow greater eligibility for sick leave. That legislation will either transition the public from the CERB to an expanded employment insurance program or to one of three new recovery benefits.

As of 7:30 a.m. ET on Saturday, Canada had 150,456 confirmed or presumptive coronavirus cases. Provinces and territories listed 129,573 of those as recovered or resolved. A CBC News tally of deaths based on provincial reports, regional health information and CBC’s reporting stood at 9,295.

In Ontario, Premier Doug Ford said bars and restaurants must now close by midnight, with alcohol service to stop at 11 p.m., but takeout and delivery will be permitted to continue beyond that.

All strip clubs will also close, he said, while explaining that the new restrictions strike a balance between public health needs and the province’s financial future.

Just in time for the weekend, Ontario is putting new restrictions on licensed establishments. As Philip Lee-Shanok explains, the province hopes to curb the spread of COVID 19 — but some fear it will have the opposite effect. 2:04

“I don’t think it’s a huge ask if they can stop serving drinks at 11 o’clock and close their establishments at 12 o’clock,” he said during his daily media briefing.

The measures were not good enough for NDP Leader Andrea Horwath, who criticized the Ford government for failing to provide “a proper, comprehensive and effective second wave strategy.”

Ski resorts in British Columbia and across Canada are preparing for what could be a difficult season as they try to maintain profits while protecting the health of guests.

All resorts will require skiers and boarders to wear masks on lifts and gondolas, but as many as eight could be allowed to ride in gondolas, and few operators — including Whistler Blackcomb — are putting formal limits on the number of guests allowed on the hill.

Many say they will allow pass-holders to reserve lift tickets while daily tickets will be available online only if there’s enough capacity.

A spokesperson for Whistler says it’s expected business will be down 10 to 20 per cent this year.

According to Johns Hopkins University, the global total of confirmed coronavirus cases stands at more than 32.5 million. More than 989,000 people have died, while over 22.5 million have recovered.

An outdoor dining program for New York City restaurants — embraced by many establishments after the coronavirus pandemic struck in the spring — will be extended year-round and made permanent, Mayor Bill de Blasio announced on Friday.

The program allowing restaurants to seat customers on sidewalks and parking spaces has been seen as a lifeline for cash-strapped businesses trying to survive the pandemic. More than 10,000 restaurants are taking part in the program.

The mayor told WNYC public radio he wants the model to become “part of the life of New York City for years and generations to come.”

With cooler weather coming, the city will allow electrical heaters on sidewalks and streets, as well as propane and natural gas heaters on sidewalks. Occupancy will be limited to 25 per cent in full tent enclosures, mirroring rules for indoor dining.

Authorities in Greece are closing Athens convenience stores, kiosks and other shops at midnight in a bid to stop alcohol-fuelled outside parties linked to the spread of the coronavirus.

Health officials say the ban will apply from Friday night to Oct. 4. Bars and restaurants are already closing at midnight in the greater Athens area. But many people buy drinks from convenience stores and party in squares, pedestrian areas and other public spaces and ignore distancing rules.

The measure also will apply to the islands of Mykonos and Lesbos.

The country of 10 million recorded 286 new cases and three deaths in the past 24 hours. The total number of confirmed cases is nearly 17,000 and 369 deaths.