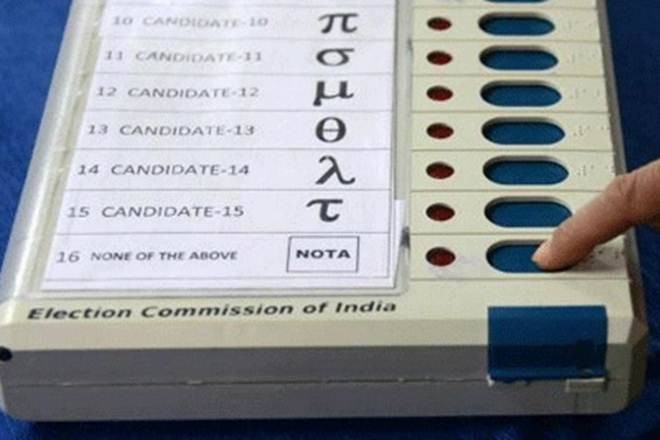 The Congress on Tuesday approached the Election Commission against the use of NOTA option in the upcoming Rajya Sabha elections, claiming it was violative of the Constitution and electoral laws, but the poll panel maintained that it was not a new direction and was introduced in 2014. Senior Congress leaders Anand Sharma and Manish Tewari met the Election Commission and demanded that the option of “None of the Above” (NOTA) be removed from use in the August 8 Rajya Sabha polls, where it is facing a battle of prestige in Gujarat.

“The use of NOTA in an indirect election is contrary to the mandate of the Constitution, the Representation of the People Act, as well as conduct of election rules,” the Congress memorandum said. Sharma also said the use of NOTA should have been made applicable through amendment in laws and not by merely changing the rules.

When asked why the party was silent when the rules were made applicable by the Election Commission in January 2014 when the UPA was in power, Tewari said, “It missed the collective wisdom of the Parliament”. Congress leaders claimed that the NOTA was allowed in the upcoming RS polls after issuance of notification.

The Congress is alleging that the NOTA option has been brought with an aim of influencing the result of Rajya Sabha poll, involving heavy-weights like BJP chief Amit Shah, Union minister Smriti Irani and Patel. Officials in the Election Commission, who refused to be identified, however, said the directions to use NOTA in Rajya Sabha elections were enforced in January 2014 after the Supreme Court in 2013 made it mandatory to have the ‘None Of The Above’ option in EVMs.

“After the NOTA option was made mandatory in Rajya Sabha polls, several directions were issued to clarify about its usage in polls,” an EC official said. In Rajya Sabha polls, the MLAs have to show their ballot paper to an authorised party agent before putting it in ballot box.
If a voter (MLA) defies the party directive and votes for someone else or uses NOTA option, he cannot be disqualified as a legislator. But the party is free to take disciplinary action including expulsion. The defiant voter can continue to be an MLA and his vote can also not be invalidated for defying party directions, the EC rules say.

Meanwhile, Gujarat BJP chief Jitu Vaghani said that by tweeting his reservations about the use of NOTA in the Rajya Sabha election, Ahmed Patel has exposed his ignorance. He said the Congress was coming out with illegal and illogical interpretation of rules to hide its desperation.