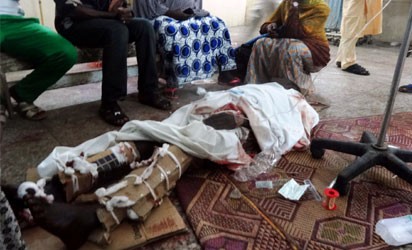 A suicide bombing inside a mosque, on Tuesday evening, left at least 29 people dead in the western Afghan province of Herat, officials said.

“The mosque was full of people when the incident happened,” Abdul-Ahad Walizada, spokesman for Herat police, said.

According to eyewitness account, the suicide bomber first opened fire on those who were praying then detonated his explosives.

Denying involvement in the attack, Taliban spokesman, Zabihullah Mujahid, said via his Twitter account, “Bomb blast in Jawadiyah mosque in Herat has nothing to do with the Mujahidin.”

The Islamic State extremist militia, on the other hand, has been attacking the mosques and gatherings regularly in the past months, in spite of being heavily targeted by U.S. and Afghan forces.

The security situation in Afghanistan has been worsening rapidly since the end of the NATO mission in 2014.

Kabul alone has witnessed 11 large attacks since January, with more than 1,000 people dead or injured.

The attacks have been conducted by Islamic State and the Taliban. In April, the Taliban controlled around 11 per cent of the country.