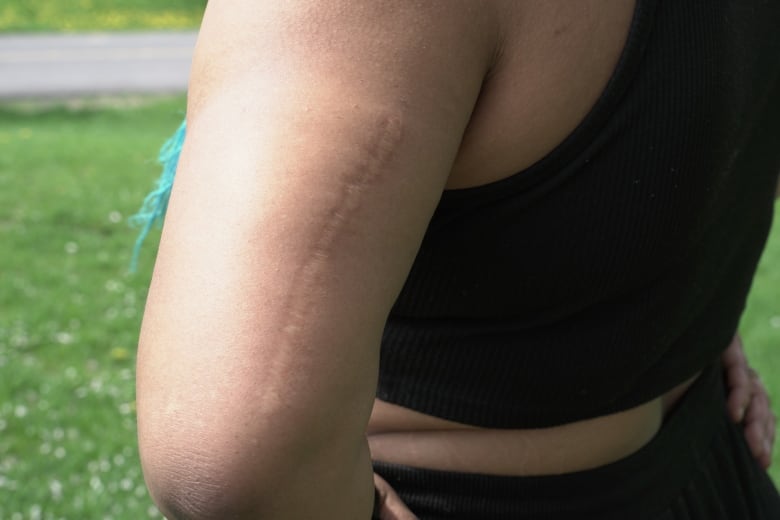 What was supposed to be a fun night out for Majiza Philip and her roommate Shane in 2014, turned into a broken arm and months of depression and anxiety after being arrested by Montreal police officers.

Now, almost eight years later, the City of Montreal has reached an out-of-court settlement with Philip after she filed a $700,000 civil suit against the municipality and police officers Éric Sabourin and Steve Thibert.

An email from a city spokeswoman confirmed Philip will receive just under $95,000. Her case had been scheduled to go to court in April.

It’s a huge relief to the 33-year-old woman.

“It’s a strange feeling to be happy over something so traumatic in my life. I guess to get an outcome like this is a beautiful thing,” said Philip. “But there’s still that reality of what happened to me.”

What happened to Philip is an event she won’t soon forget.

Philip and her friend went to a rap concert at a downtown Montreal concert hall in November 2014. After the show, officers arrested her friend for being drunk in public and placed him in the back of a police cruiser.

Philip tapped on the police car window to tell him she would meet him at the police station with his coat and belongings.

It was then that officers claimed Philip tried to break the cruiser’s window trying to free O’Brien. Three officers arrested her, breaking her left arm in the process. She now has a long scar after surgery to repair the injury.

Months later, while filing a complaint with the Police Ethics Commission, Philip learned to her surprise that she was facing charges in municipal court for assaulting police officers and obstructing justice.

Judge Katia Mouscardy acquitted her of all charges, casting doubt on the officers’ version of events in the 2017 trial.

“The testimony heard in prosecution gives the impression that one tried to camouflage an intervention that took a bad turn,” she wrote in her ruling. “The multiple contradictions and oversights in the police testimony force the Court to question their willingness to truthfully relate what happened with Philip.”

‘Every day I see a six-inch scar on my arm, and I think about it.’

Philip believes officers treated her differently that night in 2014 because she is Black.

She says she still lives with the memories, feeling anxious when she sees police officers or hears a siren. She says she struggles to explain what happened to the curious 7-year-old children she teaches tap dancing to, when they ask about the scar on her arm.

“I teach a fair amount of white children, and so it’s actually a very sensitive thing to have to bring up because they look at me with such hope and love,” said Philip.

“And for me to tell them that, you know, ‘I was assaulted by an officer,’ they can’t really comprehend it at that age. And then when they ask me why, I’m like ‘I don’t know why. I can’t tell you why.'”

“So it’s a weird lifelong experience, a trauma that I’m going to be dealing with [for] the rest of my life.”

Philip’s lawyer says he doesn’t know why the city decided to settle with his client. But Max Silverman believes the evidence in Philip’s favour was overwhelming and that may have played a role.

This is the second case in recent days that the city has settled involving police and a Black person, and where racial profiling was brought up as a contributing factor in the actions of the officers involved.

Last week, it was announced that Montreal has settled with the family of Pierre Coriolan, a 58-year-old Black man who was shot and killed by police in 2017.

“I can’t speak to the motivations going on inside the city,” said Silverman.

“But there appears to be a new trend in how the city is handling these [cases], which, as you know, citizens and residents of Montreal can only see as a good thing, that they’re taking these files seriously and treating the survivors of police violence with the respect and dignity and attention that their files deserve.”

Fo Niemi from Montreal’s Center for Research-Action on Race Relations (CRARR) has worked with Philip on this file since her arrest.

He says it was a responsible move on the city’s behalf to settle, and avoid an expensive trial at taxpayers’ expense. But more importantly, he feels it might signal a new way of dealing with racialized communities.

“The city, in the sense of saying that there’s something very wrong with the way that the police interact with ordinary citizens, particularly racialized citizens, that results in serious injuries or deaths,” said Niemi.

“The city may be taking a new approach to resolving this situation, and also hopefully to create a new bond of trust with the Black and other racialized groups in the city.”

Niemi says he knows of other cases involving the city, either before the Human Rights Tribunal of Quebec or the courts, where the city appears willing to settle.

Philip says the years since that encounter with the police have been difficult. But she feels she’s stronger.

“I have been in such a cloud for so long, and it’s a process,” she said. “I feel like I am definitely going to get out on the brighter side.”

Philip’s complaint and subsequent appeal to Quebec’s Police Ethics Commission were thrown out.

The city of Montreal and the city’s police department, the Service de Police de la Ville de Montréal, both refused comment on the matter.