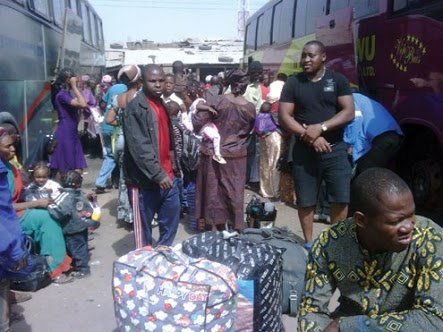 Holiday makers in the south eastern parts of Nigeria have decried the high cost of transportation into the zone from other parts of the country as they visit to celebrate Christmas.

Investigation by DAILY POST revealed that despite the stable price of petroleum products especially premium motor spirit otherwise known as fuel, which remained at N145 per liter, and the availability of the product, transport fare continued to skyrocket.

It was gathered that Lagos to Onitsha, which was formerly N3,500 by most transport companies rose to as much as N15,000 on 23rd and 24th of December.

A passenger, Mr Chukwudi Onyenwe, who travelled from Lagos to Owerri told our correspondent that he had to pay N17,000 to be able to make the journey through a transport company owned by a south easterner.

“Is this how we will manage Biafra when we eventually get it? That I paid N17,000 to join other passengers was not the problem, the main problem was that the bus attendants at the motor parks who are our own brothers treated us without respect.

“They know that there were more than enough passengers, and we had no option than to pay. I pitied families, most of who had luggage for the journey. They were simply treated as if they were nothing, and even the hand bags they carried were charged.”

He said, “We (Igbos) are our own problem. How do we explain this, that the same transport company would treat people traveling to other locations nicely, yet those coming to the east would be treated with disdain, despite the high cost of fare.”

An agent with ANIDS transport company in Awka, Mr Kwakikwa said the reason for the hike was because of the rush firstly, but more importantly because vehicles coming to the east usually travel empty to Lagos and Abuja to pick passengers.

“So, it is as if the passengers coming from Lagos and Abuja to the east that pays for the empty bus that travels to those locations to pick them. It would also be like that when the holiday makers would be traveling back in January,” he said.