Chris Christie enjoyed a closed beach, then got flamed. But he definitely did not get a tan. 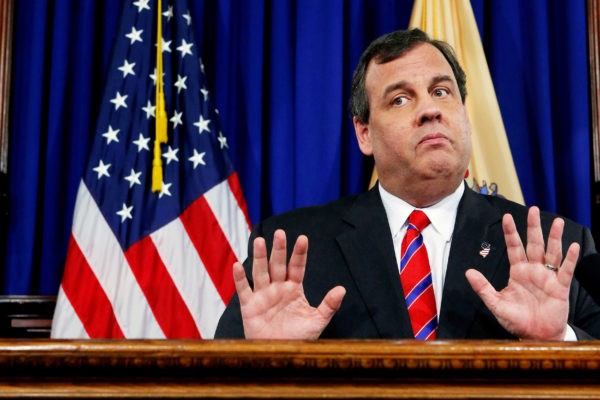 Gov. Chris Christie (R-N.J.) was spotted on a beach closed to the public in the midst of a state government shutdown. (Patrick Martin/Photo: Andrew Mills/NJ Advance Media via AP; Video The Washington Post)

New Jersey Gov. Chris Christie (R) would like you to know that he definitely did not get a tan this weekend.

Yes, Christie told reporters at a Sunday news conference in Trenton, his family was staying in the state-owned beach house at Island Beach State Park over the July 4 weekend — even though the park was closed to the public amid a statewide government shutdown.

He had been unapologetic about that gubernatorial perk the day before: “That’s the way it goes,” Christie said Saturday. “Run for governor, and you can have the residence.”

And, yes, he had joined his family at said state-owned beach house, flying between the barrier island and Trenton using a state helicopter. But when asked if he got any sun, Christie was clear.

“I didn’t,” he said Sunday, according to the Newark Star-Ledger. “I didn’t get any sun today.”

That was before the newspaper showed the governor aerial photos of himself and his family relaxing on a very large and otherwise empty (because it was closed) portion of the state beach. The exclusive photos were published Sunday evening on NJ.com, sparking outrage from New Jersey residents already upset about the state’s budget impasse.

The slide show also prompted the equivocation of the year from Christie’s spokesman, Brian Murray. “He did not get any sun,” Murray told the Star-Ledger. “He had a baseball hat on.”

Gov. Chris Christie and family soak up sun on state beach he closed to the public. @AndyMills_NJ https://t.co/5NfFIv4IWX pic.twitter.com/nnWVxw5XT1

The photos were taken from the open door of a small plane by Star-Ledger photographer Andrew Mills, who claimed in a behind-the-scenes column that Christie made eye contact with him from the beach.

“Most of the time, I get the shots and make a clean getaway. But once in a while, when the eyes meet, you know the jig is up,” Mills wrote. “ … In one photo, Christie looks me dead in the eye. He has to know what’s happening. Why else would a plane make two passes over his private beach party when there’s no one else around?”

The collection of aerial photos sparked a debate online over which shot was the most damning. Was it the close-up picture that showed Christie lounging in a beach chair, face clearly turned upward to soak in the sun’s rays?

Or was it a zoomed-out photo showing Christie and his party enjoying a public beach all to themselves with the taxpayer-funded mansion in the background?

There are so many to choose from, but I personally think this is the most devastating of @AndyMills_NJ‘s Christie photos. pic.twitter.com/AAEyJbgzEj

The governor also drew ridicule for a tweet from his official account, posted about half an hour before the Star-Ledger published the aerial beach photos. In the tweet, Christie linked to a YouTube video that showed him placing blame for the shutdown on Democratic Assembly Speaker Vincent Prieto.

New Jersey’s government shut down Friday night after lawmakers failed to pass a budget before the July 1 deadline.

“I’m not the person who has drawn a line the sand here,” Christie tweeted.

I’m not the person who has drawn a line the sand here. https://t.co/dJmapywYjm

Multiple people called him out for his poor choice of words.

“Uh, not the thing to be saying given that you, in fact, at this point are the only one able to draw lines in the sand in NJ,” one Twitter user replied.

Another added: “But you must be; you’re the only one who can get to the beach.”

Uproar over the photos — dubbed “Beachgate” online — continued into Monday, as many of the state’s “nonessential services” remained shuttered. Among those affected so far were a Cub Scout group forced to leave a state park campsite and drivers unable to obtain documents from the state motor vehicle commission, the Associated Press reported.

It’s unclear if Christie himself will suffer any career-damaging fallout from the incident. After all, he has weathered major political setbacks before, from the “Bridgegate” scandal to a failed Republican presidential primary campaign in which he was repeatedly humiliated by then-candidate Donald Trump.

Christie remained unfazed by the photos — and the backlash — Monday, according to his spokesman.

“The Governor announced Monday on Ask the Governor and at subsequent news conferences that he would be joining his family at the beach this weekend,” Murray told The Washington Post. “We are gratified The Star-Ledger has confirmed what he said on three occasions.”

NJ beaches are open in 119 of our our 130 miles of coastline. Come and enjoy them–but use sunscreen and hydrate! pic.twitter.com/7LeCYcjZqm

On Monday, Christie also tweeted an aerial photo of the New Jersey Shore, noting that “beaches are open in 119 of our … 130 miles of coastline,” the implication being that residents had alternatives to the (closed) stretch of beach Christie and his family had occupied by themselves.

The tweet spurred another round of public shaming, with many accusing the governor of being tone deaf.

“If I were governor, I sure wouldn’t be sitting on the beach if taxpayers didn’t have access to state beaches,” Guadagno wrote on Facebook. “It’s beyond words.”

Front page of today’s @starledger. It’s gonna be this kind of day in Trenton. #njshutdown pic.twitter.com/vVANVqceOs

The tragic arc of Chris Christie

Chris Christie: ‘I wouldn’t let General Flynn in the White House, let alone give him a job’