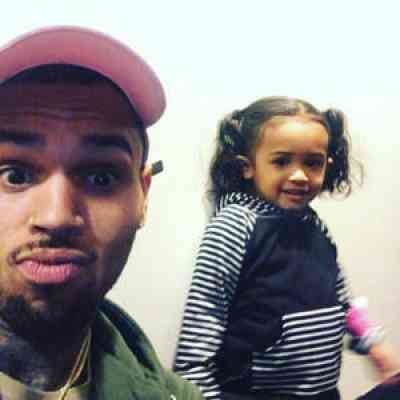 She’s growing up so fast!

Earlier today, Chris Brown took to his Instagram to wish his baby girl Royalty a happy third birthday and shared a photo of his darling daughter (who has gotten so big!) in what looks like a school photo.

In the photo, Royalty is smiling wide in white looks like a faux tree house. She’s outfitted in a grey sweat suit and bright white shoes as she holds a doll.

Along with the sweet photo, the proud papa wrote, “MY BEAUTIFUL BABY GIRL IS OFFICIALLY 3 YEAR OLD!!!!HBD RO RO! I LOVE YOU.”

Chris, who pleaded guilty for assaulting then-Rihanna in 2009 and was accused of felony assault again in 2016 by Baylee Curran, may not be known for getting along with women, but Royalty is certainly one female that’s managed to melt his heart.

Despite all his controversy and run ins with the law, the “Loyal” singer has been quite the doting dad, often talking about his daughter,bringing her to events and posting about her on social media.

Previously, the music maker told Ryan Seacrest that he thought being a dad was “mellowing” him out.

Chris said, “I have a co-parenting job that’s pretty amazing but, you know, learning how to be a dad, especially learning how to take care of somebody else, you know, I barely know how to brush my teeth in the morning!” he joked.

“It’s actually great. It’s very humbling. You know, it’s very calming. I think I was a lot, you know, rambunctious, very hyper as a kid but now seeing that 10 times over, my daughter’s kinda like mellowing me out.”

As previously reported by E! News, Nia spoke to Latina about what it’s like co-parenting with the notorious rapper. “She adores him,” said Nia. “Especially when he’s on the road. She always wants to call him. She’s pretty attached to him. I think it’s a very intimate and beautiful relationship that they have.”

She did admit that co-parenting is a work in progress for her and Chris, whom she has had several very public social media disputes with since the birth of their daughter.

“I’m doing all I can to co-parent and make sure that Royalty will never see any negativity me and him have,” the mom explained. “No matter what issues we have, I will always be 100 percent for him to be there and be hands-on.”

Last year, Guzman moved to Los Angeles so that Royalty could be closer to her superstar father.