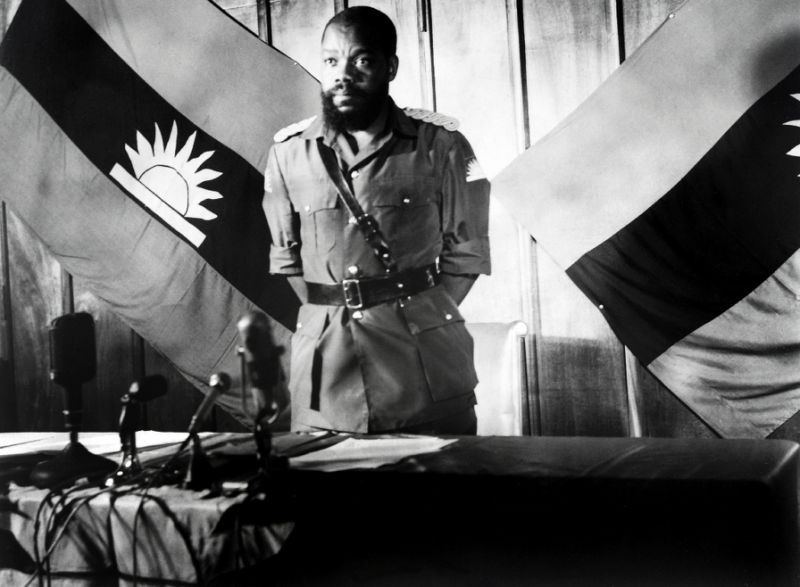 Fifty years ago, the Igbo people of southeast Nigeria seceded, declaring an independent Republic of Biafra and sparking a brutal civil war that left about one million people dead.

– Coups and secession –
On May 30, 1967, the military head of Nigeria’s eastern region, Emeka Odumegwu Ojukwu, declares “the independent Republic of Biafra”.

His move comes two days after the head of Nigeria’s military government, General Yakubu Gowon, divided the federation into 12 states, including three in the east.

Biafra, accounting for less than 10 percent of Nigerian territory, at the time had a population of 14 million out of 55 million nationwide.

Since independence from Britain in 1960, Nigeria had managed to stay a single entity despite historic enmity between the mainly Muslim north and the largely Christian south.

But the Igbos felt discriminated against by the two other main ethnic groupings, the northern Hausa-Fulani and the Yoruba in the southwest.

In January 1966, Nigeria suffered its first military coup, led by the Igbo General Johnson Aguiyi Ironsi. A counter-coup launched in the north in July kills Ironsi and many of his senior Igbo officers.

Thousands of Igbo civilians are killed in reprisals, especially in the north, and millions of survivors flee back to the southeast.

The government rejects the secession of the southeast, which is rich in agricultural and mineral resources, especially oil.

– Bombardments and blockade –
Gowon announces a general mobilisation and denounces the independence declaration as “an act of rebellion”, saying it will be “crushed”. The military imposes a blockade on eastern Nigeria.

On July 6 the army unleashes a general offensive with its first air bombardments.

In October federal troops take Biafra’s capital, Enugu, then the port of Calabar. Onitsha and Port Harcourt are recaptured in the first months of 1968.

Britain, the Soviet Union and the Organisation of African Unity (the forerunner to the African Union) side with the federal government.

Only a few African countries and France back Biafra.

– Humanitarian drama –
On July 3, 1968 the International Committee of the Red Cross (ICRC) says that eight to 12 million people are affected by the conflict and that 200 people a day are dying of starvation in Biafra.

“One would think we were seeing ghosts marching past, thin and silent, wrapped in grey rags,” an AFP special correspondent reports in August.

“Nearly all are women of all ages and old people… there are no longer many children in Biafra.

“The refugees travel, their stomachs empty, fleeing the noise of federal cannon. The noose is tightening.”

In late August he writes of a million new refugees in 15 days as the army advances.

“One person dies every 15 minutes… refugees are dying from starvation and exhaustion,” he reports.

The Biafra famine caused by the blockade makes headlines around the world, with heartrending photographs of children, stomachs bloated by malnutrition, their legs bent with rickets.

A handful of French doctors working for the ICRC, including the future French government minister Bernard Kouchner, brush aside convention and political borders to launch an aid effort.

In 1971, they go on to found Medecins Sans Frontieres (Doctors Without Borders).

– ‘No victor, no vanquished’ –
From August to September 1968 the army retakes several towns after a major offensive.

Only Christian churches and the French Red Cross continue their aid flights in ever more dangerous conditions.

In early January 1970 the army begins its final assault, and on January 15, Biafra ceases to exist.

Ojukwu flees on January 11 to Ivory Coast, leaving his deputy, Philip Effiong, to officially surrender to Gowon in Lagos, the federal government’s capital at the time.

The east resumes its place in a united Nigeria. Gowon vows “No victor, no vanquished”, and pledges to work for national reconciliation.

But resentment lingers and deepens over the decades, as the Igbo complain of a lack of investment in the southeast, which many view as a punishment for Biafra.

The war invests considerable power in the army, with military coups becoming a feature of Nigerian political life for decades.