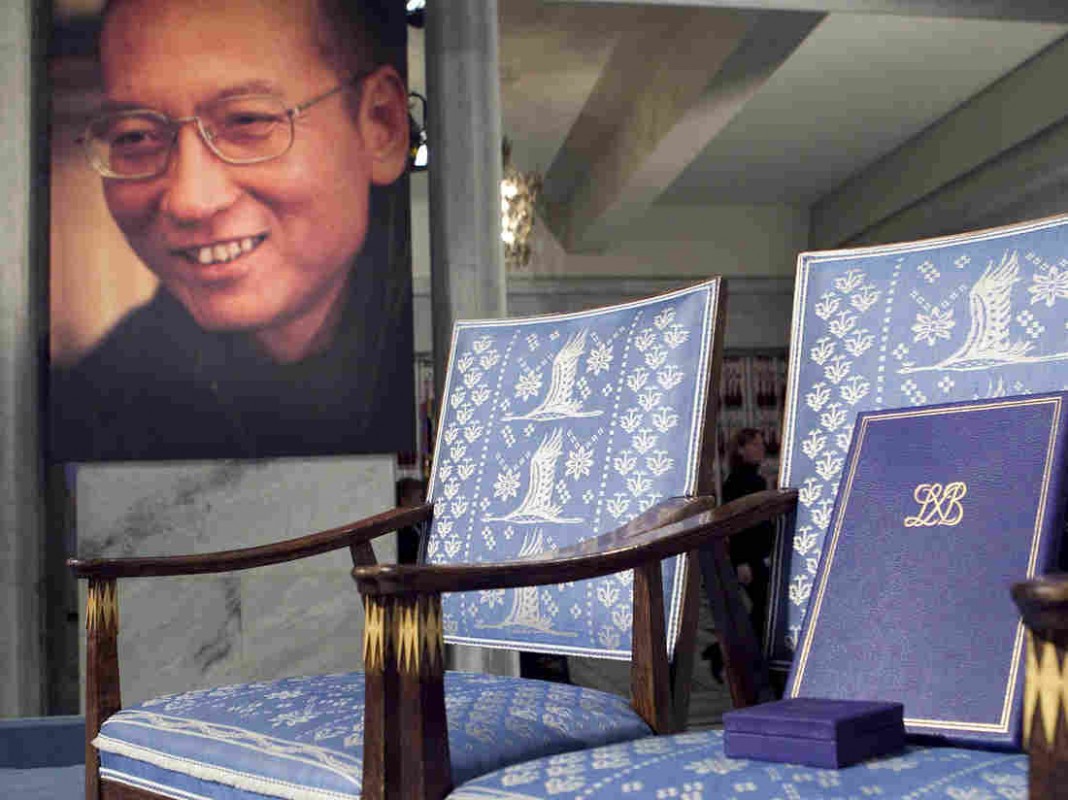 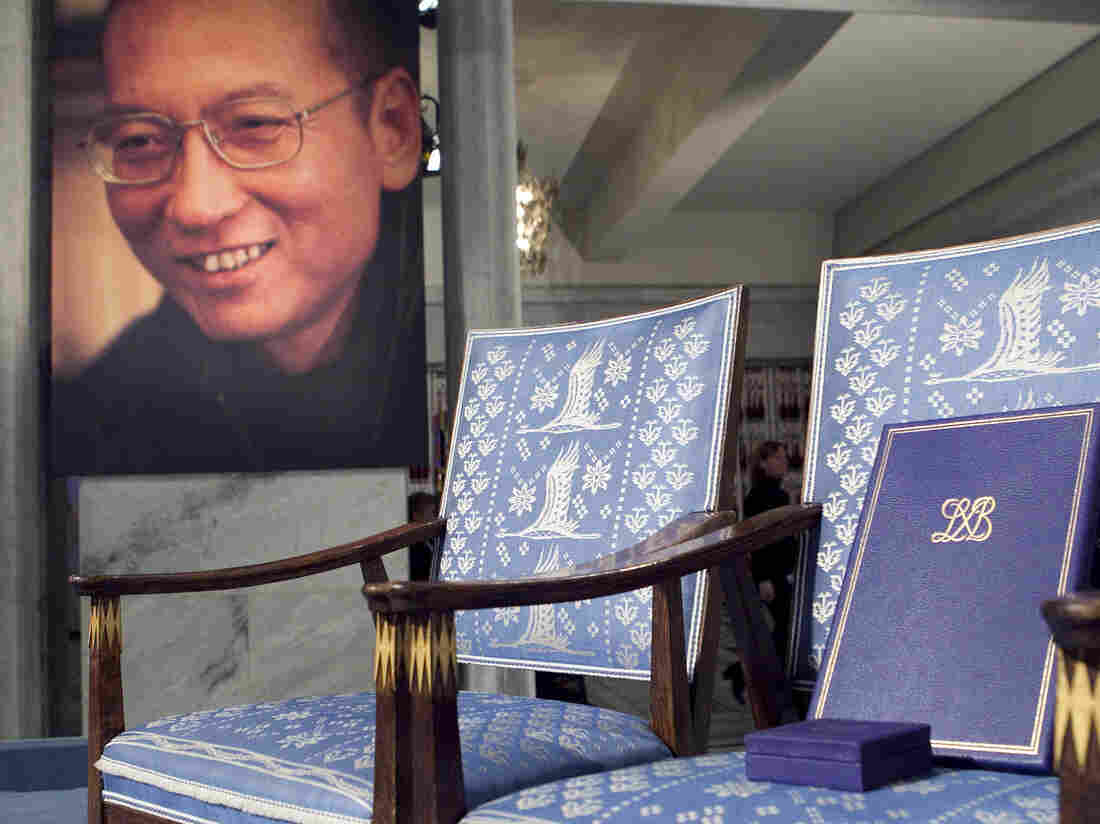 A chair sat empty for Nobel Peace Prize winner Liu Xiaobo in Oslo in 2010. The rights activist was imprisoned in China in 2009.

Prominent dissident Liu Xiaobo, the only Chinese citizen ever to be awarded a Nobel Prize while still residing in China, has died at age 61. Liu died Thursday while on medical parole in northeastern China’s Shenyang city, where he was being treated for liver cancer. He was serving an 11-year prison sentence for trying to overthrow the government.

By the time Liu, a scholar and human rights advocate, was diagnosed in late May, his liver cancer was already in its late stages. Chinese authorities released video footage intended to show that Liu had been receiving good medical care, and they invited U.S. and German doctors to treat him. But Beijing rejected calls to allow him to seek treatment overseas.

Liu’s biographer and friend, the U.S.-based dissident Yu Jie, believes that China’s government had a motive to withhold or delay treatment: It feared the consequences of Liu getting out of prison alive.

In that case, Yu says, “He would [have] become a standard-bearer for China’s democratization and civil society.”

Liu was born in 1955 in northeast China’s Changchun city, a center of heavy industry. He spent his teenage years in the countryside during the 1966-1976 Cultural Revolution, and was admitted to college in 1977, as universities reopened following the decade of chaos.

In 1988, Liu received his doctorate in literature from Beijing Normal University, and he stayed on to work as a lecturer and literary critic.

“He was known then as a rebel, the black horse of the literary scene,” says Perry Link, a China scholar at Princeton and the University of California Riverside who has translated Liu’s works into English. “And he took on just about everybody else, and made fun of them and debunked them.”

Yu Jie says Liu was especially good at debunking Chinese intellectuals who claimed to be liberals. “He perceptively discovered and criticized traces of the Communist Party’s education and brainwashing in them,” he says.

When the Tiananmen Square democracy movement broke out in 1989, Liu flew back to Beijing from New York, where he was a visiting scholar at Columbia University.

Along with three other protest leaders, Liu led a hunger strike in the heart of the square. Its aim, he said, was to compel both the government and the student protesters to reflect on their own behavior.

Standing near the Monument to the People’s Heroes in the square on June 3, 1989, Liu addressed the students with a bullhorn. The scene was captured in a 1995 documentary, The Gate of Heavenly Peace, by filmmakers Richard Gordon and Carma Hinton.

“A major problem with the student movement,” Liu told the students, “is that it is obsessed with opposing the government, but unconcerned with practicing democratic principles in its own ranks.”

He suggested that students consolidate their gains and return to campus to try to make politics there more democratic. “To replace a military dictatorship with a student dictatorship would hardly be a victory,” he said. “It would be a tragic failure.”

In the early hours of June 4, 1989, as soldiers gunned down protesters in the streets of the capital, Liu negotiated with the military to let the remaining students leave the square unharmed.

For his role in the movement, Liu was jailed for 21 months — the first of what would be four stints in prison.

The final one started in 2009. He was jailed for his role in drafting a call for political reform known as Charter 08. The document recounted how the Communist Party, just like the nationalists before them, had promised a modern, democratic China — but failed to deliver.

Chinese intellectuals had been pointing this out for years. But Perry Link says China’s leaders particularly objected to one item in the charter.

“That item of ending one-party dictatorship stuck in their craw, I believe,” he says.

Liu Xiaobo was not the charter’s main author — but of its roughly 300 signatories, he drew the heaviest punishment. Link, who helped Liu translate the charter into English, says Liu told the other authors and signers that he was willing to take the rap for the document.

Liu was sentenced to jail on Dec. 25, 2009. China dismissed widespread international condemnation of the verdict as interference in its internal affairs.

The following year, Liu was awarded the Nobel Peace Prize for “his long and non-violent struggle for fundamental human rights in China.”

The head of the Nobel committee placed Liu’s prize on an empty chair to symbolize his absence from the award ceremony that year. Liu was the third Nobel laureate to receive the Peace Prize while under arrest or in detention. (The first was German journalist Carl von Ossietzky in 1935; the second, Burma’s pro-democracy leader Aung San Suu Kyi in 1991.)

When Liu Xiaobo’s wife, Liu Xia, visited him in prison to give him news of the award, “His first reaction was not happiness or pride,” Yu Jie recalls. “He said the prize was for the Tiananmen generation, and for the students who had died.”

China’s state media have described Liu as a stooge of the West, saying his Nobel Peace Prize was a sign of the West’s prejudice, arrogance and intent to impose its own ideology on China.

But Link says that Liu was able to transcend such acrimonious politics. He says a visit Liu made one day to the Metropolitan Museum of Art in New York led to a sort of revelation.

“He realized in that great museum that the big problems of humanity are not really East vs. West,” Link says. “They’re really much broader, much more existential than that.”

In a document written on the day of his trial titled “I Have No Enemies: My Final Statement,” Liu said, “I hope that I will be the last victim of China’s endless literary inquisitions and that from now on no one will be incriminated because of speech.”

In the same document — which also served as his Nobel Peace Prize lecture a year later, read in his absence by Norwegian actress Liv Ullmann — he brimmed with confidence that the rule of law and human rights would someday prevail in China. “There is no force that can put an end to the human quest for freedom,” he wrote, “and China will in the end become a nation ruled by law, where human rights reign supreme.”

For now, Liu Xiaobo remains largely unknown in his own country, and his name has been erased from the country’s Chinese-language media and Internet.