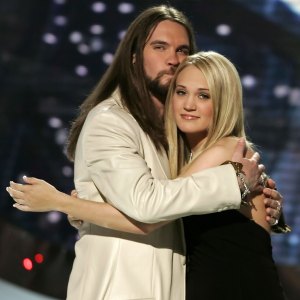 Carrie Underwood took a moment to look back at the crazy path her life has taken as she remembered the 15th anniversary of her American Idol audition on Friday, September 27.

‘American Idol’ Winners Through the Years

The “Southbound” singer, who won the singing competition in 2005, spoke to fans during her concert at the Bridgestone Arena in Nashville, Tennessee, on Friday about the life-altering experience.

“When I was a little girl … if you had asked me what I wanted to do when I grew up, I would have told you I wanted to be a famous country music singer,” the 36-year-old said, according to The Tennessean. “As I got older, dreams tend to give way to practicalities, so I started going to school to get a real job. One day there was an open door, and I walked through it and my life was changed forever.”

“If there is something you guys out there are holding on to that just seems like too big of a dream or something too crazy,” she added, “I’m living proof that the craziest things can happen, and you can end up exactly where you always wanted to be.”

Carrie Underwood’s Most Badass Moments: From ‘Before He Cheats’ to Nonstop Real Talk

Underwood auditioned for Idol in the summer of 2004, traveling to St. Louis, Missouri, with her mom from Oklahoma. The then-21-year-old sang Bonnie Raitt’s “I Can’t Make You Love Me,” blowing away judges Randy Jackson and Simon Cowell, who asked her about her ability to cluck like a chicken.

In an interview with BBC Radio in July, the singer admitted she almost talked herself out of auditioning for the show.

“My mom was a big supporter when I was trying to talk myself out of it,” she said, according to CMT. “Like, ‘It’s stupid. There’s no way. What are the chances?’”

Instead of letting her turn her back on her dreams, her mom told her, “I will drive you. Let’s go. Why not?”

Since winning Idol, Underwood has gone on to score three Grammy awards and released six albums, including her latest, Cry Pretty, which was the best-selling female album of 2018.

“This has exceeded any and all hopes and dreams and expectations that I ever had,” Underwood, who shares two sons, Isiah, 4, and Jacob, 8 months, with husband Mike Fisher, told the BBC of her success.