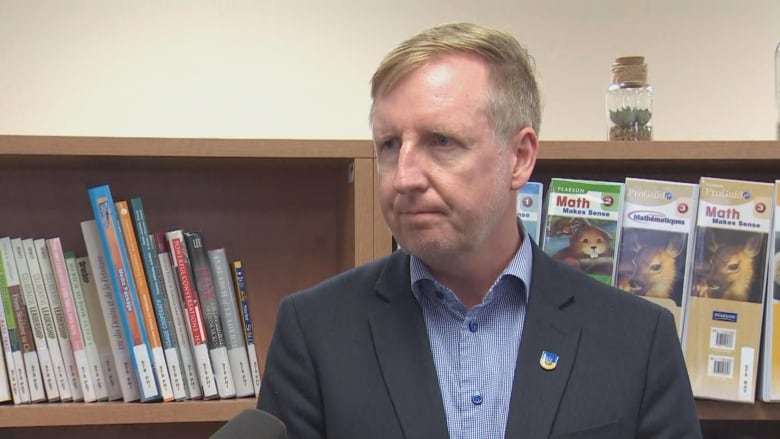 Cardy announced in a tweet that he was quitting the cabinet of Premier Blaine Higgs but would stay on as a Progressive Conservative MLA for Fredericton West-Hanwell.

In a scorching resignation letter to Higgs, Cardy slammed the premier’s leadership style, saying “change requires care, not a wrecking ball” and some reforms to French second-language education “will stall because of your micromanagement.”

“You cannot change deadlines on large systems based on your emotional state, without undermining the quality of the work, or the morale of your team,” the letter said.

“Government is not the same as building oil tankers,” Cardy wrote, apparently referring to the premier’s previous career with Irving Oil.

He also accuses Higgs of “choosing to yell ‘data my ass’ at a senior civil servant” because he didn’t like what the department’s numbers showed.

“That was the end of your political project in my eyes: If you reject evidence because you dislike it then you don’t believe in evidence,” he wrote.

Cardy also said Higgs’s abolition of partly elected regional health authority boards represented “a steady consolidation of power in your hands” and that he was trying to delay or undermine reconciliation between language communities and with Indigenous people.

Cardy did not immediately respond to a request for an interview.

The resignation letter said Higgs has a plan to “abolish” French immersion by September 2023, something that was recommended by an independent review of the program earlier this year.

Cardy said getting rid of the program was not in the government’s election platform or throne speech and has not been approved by the PC cabinet or caucus.

Eliminating it “would place huge stress on the education system and damage the education of our province’s anglophone young people,” he wrote.

Liberal Leader Susan Holt said the critique in Cardy’s letter “seems to reflect what we’ve been hearing from others and reflects some of the concerns we’ve had about this government and their approach to leadership.”

Cardy, the former leader of the New Brunswick NDP, joined the PCs in 2017 as an adviser to Higgs and ran for the Tories in the 2018 election.

At the time Cardy switched parties, Higgs said they were “directly aligned on so many issues” but acknowledged they would not see eye-to-eye on everything.

“We can work through any minor issues that come up, because I do it every day with everyone.”

In 2020, Cardy failed to win enough support from the PC caucus to get a bill passed that would have eliminated philosophical and religious exemptions from the mandatory vaccination policy for school children.

And last year, he criticised the government’s ban on provincial officials delivering Indigenous land acknowledgements at public events, saying it “added an unnecessary conflict that is creating confusion and justifiable anger toward our government.”

Cardy has also been a vocal supporter of Centre Ice Canadians, a group of moderate conservatives who have criticized federal Conservative Leader Pierre Poilievre.

The six chiefs of the Wolastoqey Nation in New Brunswick issued a statement Thursday calling on other PC ministers to join Cardy in resigning.

“It is more evident than ever that your leader is not operating within the fundamental principles of good governance, nor the aims and principles of the Progressive Conservative Party of New Brunswick,” the statement said.

“Stop standing by and allowing a single person to conduct such harmful practices. Indigenous people, and New Brunswickers, are watching closely and applauding the winds of change.”