Indigenous men come together in Sask. to work toward healing, change 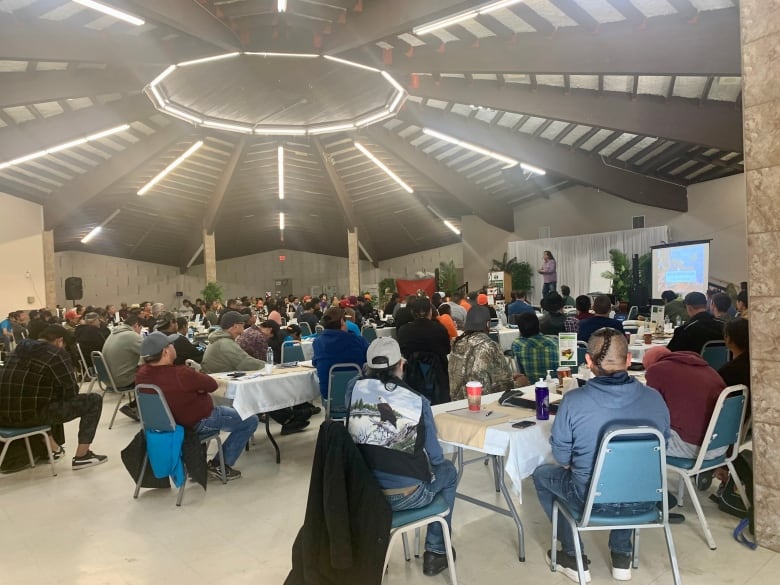 Chester Herman was gassing up his vehicle when he noticed a poster for a men’s wellness conference hosted by the Meadow Lake Tribal Council (MLTC) outreach team.

It’s not something that would typically stop him in his tracks, but the poster listed grief and loss among the topics to be discussed.

“It kind of hit the spot for me. I’m going through a lot because of my loss,” he said, describing an immense sorrow he has felt since the death of his wife.

The overarching theme of the conference —  which took place last week in Meadow Lake, Sask. — was dealing with the root causes of current issues facing some Indigenous men, such as mental health challenges, addictions, grief and guilt.

Herman, a widower from Clearwater River Dene Nation, signed up alongside more than 200 other men.

MLTC Vice Chief Richard Derocher said many Indigenous communities are suffering because of unresolved trauma. He said they’re trying to break the cycles of violence within men.

“Pre-contact, our men were very loving, very protective, providers of our communities. The men you see today — I won’t say all men but a good number of the men — have been hurt, and when you’re hurt you go in defensive mode,” Derocher said.

“I’m talking about the drugs, the alcohol, the abuse.”

Derocher said organizers want to help men understand the emotional pain and violence that has been passed down through generations. The trauma stems from colonial practices that removed people from their culture and families, like the forced attendance of residential schools and the Sixties Scoop, he said.

“We have to get to the root issues, the root of what causes us to behave the way we behave as First Nations men, as Indigenous men,” he said.

Derocher said men must know that healing is possible.

“In our communities the women are leaders in healing, and the women have been asking us for many years, for the men to step up.”

For Derocher, the first way to step up is to open up and talk. He said it was encouraging to witness that at the conference, as problems among all generations came to light.

Men spoke about homicides involving loved ones, losing their children to suicide, grappling with shame from being abused or perpetrating violence.

Norman Opekokew, a Cree participant from the Canoe Lake First Nation, said many of the men realized for the first time that they weren’t alone in their struggles.

Until the conference, many had buried their feelings instead of dealing with them, he said.

“I’ve done that myself, the things that have hurt me in the past, I’ve hidden.”

Herman said the discussions were heavy, but that he heard many ideas that helped him to understand certain feelings for the first time.

“As an Aboriginal person, it hits you in places that — you know, It’s always been there, but you don’t know how to deal with it, so you never bring it up, but at this conference we get a chance to express ourselves,” he said.

“It’s an eye-opener and it’s a journey for us northern men to start healing from all the pain.”

Tools of vulnerability and humour

Men at the conference collaborated to create solutions for change. Guest speakers shared stories of their own journeys, offering hope, inspiration and advice.

Opekokew said some teachings that stuck with him the most were the importance of prayer and the value of being vulnerable with others.

He also learned how important it is to laugh “right from the gut, from the heart.”

Burnstick said Indigenous men were traditionally community protectors, who would “warrior up” for the hunt but be gentle in the home.

“Through the residential school process and the colonization, we lost the gentleness. We just know how to warrior up and we turned too hard,” he said. “We know how to punch things, when we’re mad. Men don’t know how to process emotional pain.”

He said emotional pain has been heightened within Indigenous communities. He said he’s seen many people triggered in the last few years by public discussions, reports and findings that reveal or confirm the extent of violence done toward Indigenous people.

Burnstick pointed to the thousands of unmarked graves found at residential schools, the pope’s visit and apology, the Truth and Reconciliation Commission, and missing and murdered Indigenous women and girls.

He said people need to be able to share in joy and laughter as they work through their pain.

“I think that our people are ready to heal, to say we’re going to begin to take responsibility … begin to deal with their own issues,” Main said. “We don’t need to stay in that path of trauma and feel stuck.”

“I want to see more communities in Saskatchewan doing this,” she said. “I’m tired of hearing about suicides and family violence. People are just crying out for help like ‘I don’t know what to do. I don’t know how to fix my life,’ and I think this is an answer, or part of the answer.”

Main and Vice Chief Derocher would like to see the men who attended the conference take the lessons home, starting their own men’s circles to inspire healing, accountability and change.

“We’ve got to make our house a home, Derocher said. “A safe place where there is no abuse of any kind — be it spiritual, be it sexual, be it physical, be it emotional — so our children grow up and our grandchildren grow up normalizing that good behaviour.”

That resonated with Chester Herman. After the conference, he felt motivated to create change.

“I’m hoping this grows, because you know what I’m taking in, I would love to pass it on to my community,” he said.

“It’s time for us men to step up now. We are the protectors of our homes, of our communities.”