Cardiff City 1-1 Fulham: Harry Arter sent off as visitors hold on for draw 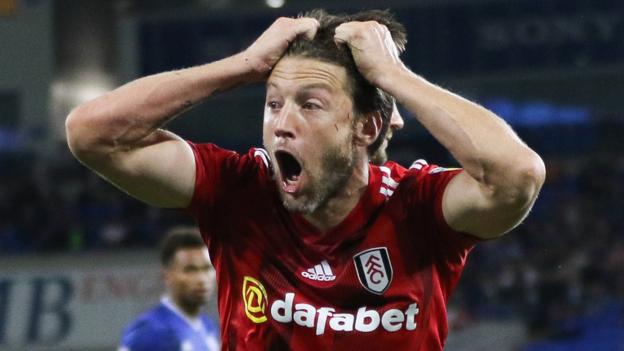 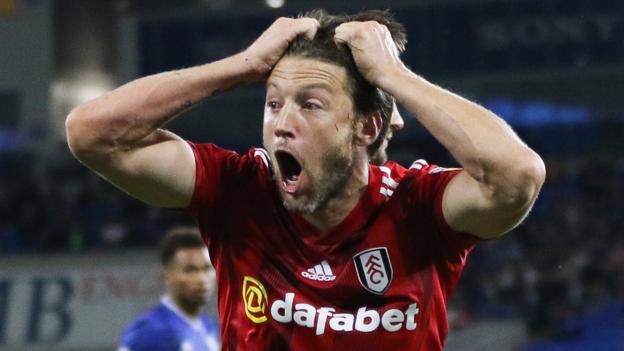 Harry Arter was sent off on his return to Cardiff as 10-man Fulham held on for a draw in the Championship.

Josh Murphy fired the hosts in front, only for Aleksandar Mitrovic tohit back from close range.

Arter, who spent last season on loan at Cardiff, was sent off after he was booked twice within two minutes in the second half.

That forced Fulham, who had enjoyed as much as 75% possession before then, to dig in for a point.

Scott Parker’s side climb up to fourth in the Championship table, while Cardiff are up to 10th.

Tempers were always likely to boil over as this was a fixture with more than a little needle.

Rivals when they were promoted to the Premier League together two seasons ago and adversaries again when they came back down to the Championship in the last campaign, Cardiff and Fulham do not like each other.

Much of that is related to their markedly different playing styles, with Cardiff’s direct and muscular approach a startling contrast to Fulham’s fluid, possession-based game.

Neither method gained pre-eminence in a rather slow and scrappy start to this encounter.

Mitrovic, who had four goals from his first four league games this season, had two efforts comfortably saved by Alex Smithies, while Cardiff struggled to carve out genuine scoring opportunities despite fleeting signs of danger from their wingers Murphy and Gavin Whyte.

The Bluebirds took the lead thanks to a clinical counter-attack, with centre-back Aden Flint dispossessing Ivan Cavaleiro before playing an excellent through ball to Murphy, who ran clear and buried his finish in the bottom corner.

Cavaleiro soon made amends as his low cross gave Mitrovic a simple tap-in to bring the visitors level just before half-time.

Fulham had almost total control of the ball after the break but, despite enjoying 75% possession, they did not do a great deal with it.

Their hopes of turning that domination into a lead were dealt a blow when Arter, booed all evening by Cardiff’s fans, was sent off.

Just two minutes after he was booked for a late sliding tackle on Joe Ralls, the former Bluebirds loanee received his second yellow card for diving under a challenge from Sean Morrison.

Arter’s dismissal was greeted gleefully by the home crowd and, buoyed by their roars, Cardiff’s players pushed forward in search of a winner.

Ralls blasted a long-range shot narrowly over, Robert Glatzel nodded wide and then Morrison saw his free header at the back post miss by a matter of inches.

It was a frustrating end for the hosts – particularly as Fulham’s Alfie Mawson and Tom Cairney were both booked for time-wasting – but ultimately they could not create chances of a high enough quality to find a way past their dogged opponents.

Cardiff City manager Neil Warnock said: “It was an exciting game. One minute of madness cost us the game. I

“It was a red card, and he probably should have been booked for throwing the ball at the linesman in the first half.

“You know what you’re going to get with Harry, he did brilliantly for us and he’s a super lad.

“He’s a nightmare for a manager. He [Scott Parker] is a relative but e’ll be pulling his hair out, he just can’t change.

“You can look at him [Arter] in the face and tell him to calm down and he’ll say ‘yeah, yeah’ and you think it’s registered. But then he’ll go and kick somebody. But he’s a hell of a lad to have in the dressing room.”

Fulham manager Scott Parker said: “Regarding the sending off, I think the question that needs to be asked is ‘did he make contact with him?’ and he did.

“The first infringement is that he fouled him but we’ve not looked at that. We’re going straight to when he taken two steps and gone down after that.

“I don’t understand. If he stays on his feet, it’s a corner to them so that’s what’s frustrating for me.

“Ultimately, did he get contact? I’ve seen it twice and heard what people are saying – everyone is of the same view that he got touched.

“He’s got touched so if we’re going for the first infringement, it’s a foul.”