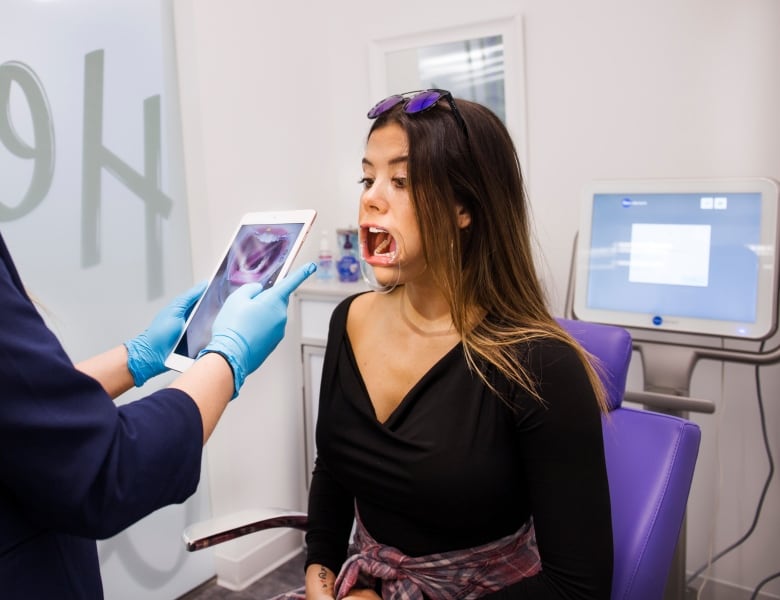 A U.S. company that mails retainers to clients to straighten their teeth has filed a lawsuit against Manitoba dentists, marking its first legal threat in Canada.

SmileDirectClub, a Nashville-based company that has been involved in dozens of lawsuits and complaints in the U.S., filed a statement of claim against the Manitoba Dental Association in the province’s Court of Queen’s Bench on Aug. 14.

The company, along with SDC Canada Inc., is accusing the dental association — and its entire 11-person board, which includes seven dentists — of making “false or misleading statements” about the company. SmileDirectClub also accuses the association of misleading and intimidating dentists into not doing business with the company, thus hurting its business, according to the statement of claim.

At issue are two email alerts the dental association sent earlier this year, which the company cited in its statement of claim. The emails talked about the rise in direct-to-consumer dental services and reminded members that they must provide patients with in-person exams and that taking impressions of teeth for retainers is a regulated activity that must be done with a dentist on site.

“There may be a significant risk of harm to the patient should these not be followed,” the dental association wrote in one of the emails.

SmileDirectClub, which mails a series of custom-made plastic retainers to clients to straighten their teeth, calls itself a “dental support organization” in its statement of claim and disputes the dental association’s charges.

The statement of claim also says that the association’s emails were calculated to give dentists and dental specialists the impression that in-person exams by the dental association’s members is required prior to treatment — and says there is no such regulation.

The company argues that it is not subject to regulation by the dental association.

“The board has no authority over activities that do not constitute the practice of dentistry,” SmileDirectClub says in the statement of claim.

In an emailed statement, the dental association’s lawyer, Ted Bock, said the defendants “deny all allegations of wrongdoing” and “will vigorously defend the claim.”

None of the allegations have been proven in court. The dental association has 20 days to file a statement of defence after being served and their lawyer said they will elaborate on their position at that point.

Business ethics expert Maureen Kilgour said the statement of claim is part of a pattern of established behaviour from a company where it aggressively tries to protect its business interests through the legal system — and the fact the company named each board member in the document might have broader implications.

“It’s an example of one company coming into conflict with what we would kind of see as the public interest,” said the University of Winnipeg professor.

Since SmileDirectClub was founded in 2014, the company has been the subject of criticism from the American Association of Orthodontists and dozens of state dental boards — including federal court cases in Georgia and Alabama.

The company’s critics argue its business model doesn’t do enough to protect patients because they don’t ever see the treating orthodontist during the process.

SmileDirectClub customers have impressions made of their teeth, either by having 3D digital photographs taken in one of the company’s “SmileShops” — which are located in 18 cities and towns across Canada, including Winnipeg — or by ordering an at-home impression kit.

Customers are required to sign a waiver stating their regular dentist has not identified issues in the last six months that could affect their treatment. They also agree to continue seeing their dentist during SmileDirectClub treatment, said the statement of claim. No in-person meetings ever happen with the company’s orthodontists.

Direct-to-consumer services like SmileDirectClub pose “a public health and safety issue,” said Sean Murphy, general counsel for the American Association of Orthodontists, which filed 36 complaints with state dental boards alleging regulatory violations by the company in 2017.

“You’re moving teeth. And if you do it wrong, there are serious risks,” said Murphy. “Some of the bad things that can happen if teeth are moved inappropriately are hard, or might be impossible, to fix. They might be irreversible.”

SmileDirectClub and its lawyers in the U.S. declined to comment, citing the company’s recent S-1 filing with the U.S. Securities and Exchange Commission, which is the first step to becoming a publicly traded company.

The American Association of Orthodontists also submitted a petition asking the Federal Trade Commission to initiate enforcement against SmileDirectClub and wrote a letter to the U.S. Food and Drug Administration asking for an investigation into the sale and distribution of the company’s products.

The dental organization also filed briefs in several U.S. federal court cases related to the company, including the one in Georgia where the court dismissed SmileDirectClub’s claims against the state’s dentistry board, said Murphy.

The same court decision, which was issued on May 8, 2019, also dismissed the company’s claim that its digital scanning of patients’ teeth should not be considered dentistry.

In the Canadian lawsuit, the company is making a similar argument.

While SmileDirectClub has established itself as a highly litigious company in the U.S., the Manitoba statement of claim signals that this approach has begun to seep into Canada — especially since the company, which is worth about $3.2 billion US, has taken the first steps to become a publicly traded company, said Kilgour, the U of W professor.

“It’s going to be a huge fight because there’s a lot of big money involved … The statement of claim really is a jockeying of position for this demand in the market for less-expensive orthodontic treatment,” she said. “It’s a battle that’s going on in all of the states, and it will happen to all the provinces.”

Geoff Mowatt, the lawyer for SmileDirectClub Canada Inc., said the Manitoba statement of claim is the company’s first legal action Canada. He did not rule out the possibility of further lawsuits across the country.

“We’re monitoring the situation in Canada, and monitoring any anti-competitive behaviour that we see,” he said. “It would be on a case-by-case basis, but it’s certainly possible.”