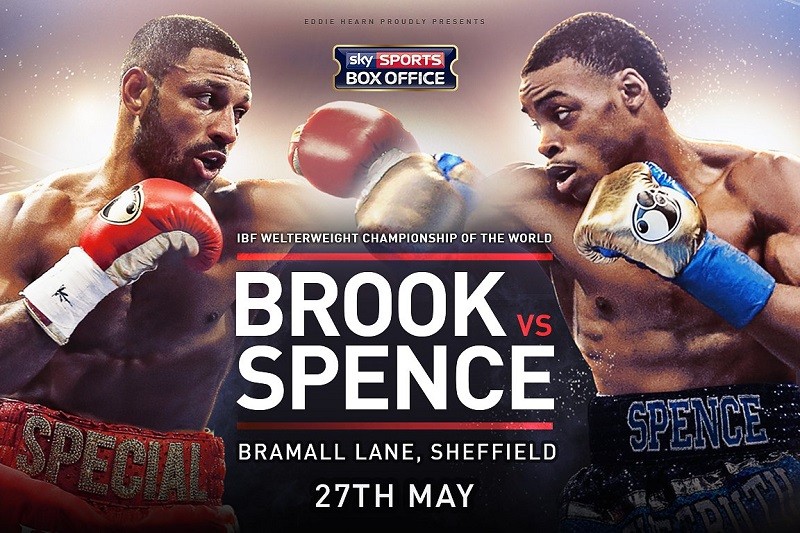 Kell Brook is still slightly amused that he is expected to lose his latest world title defence on Saturday night against Errol Spence in Sheffield, outdoors under the stars at Bramall Lane.

Brook will be making the fourth defence of his IBF welterweight title, a title he went to America and won against the odds when he beat Shawn Porter in the summer of 2014.

In Brook’s last fight he gained 13 pounds, was leading against Gennady Golovkin before his corner retired him in the fifth.

“Look at what I’ve done, look at the challenges I have had to overcome and then explain to me how he is the favourite,” asked Brook. “It’s a joke, I mean, he’s a good fighter, but he’s never been anywhere near a boxer like me.”

Brook has a valid point.

Spence was part of the American team at the London Olympics, part of a team that went back to America without a medal and, contrary to what is being said, there was a lot of expectation, especially about Spence’s chance of winning a gold.

Spence turned pro late in 2012, started to beat the right men and since the start of 2015 he has finally emerged as a top fighter. His last six wins, all by stoppage, are impressive, but none of his victims would have lasted much longer with Brook.

The American is not quite a hype-job, but he is fighting more on expectation, rather than reputation; Brook has nothing to prove. It seems that Brook’s battle with the scales, which is nothing new, has influenced the thinking of the boxing sages.

“If he makes the weight and it is a big if, he will have nothing left,” said Derrick James, Spence’s trainer and entertaining mouthpiece, six weeks ago.

Brook has admitted that it is difficult to keep making the 147-pound limit and that is why he has a 13-week camp and not the more traditional nine or ten weeks in camp. Brook has also admitted that he likes to eat and often raids the fridge in the middle of the night.

The very best Americans arrive in Britain like Gervonta Davis last weekend and savagely extinguish the hopes of local fighters. Is Spence the latest?

Spence is only four years younger Brook, not quite the extraordinary kid that fits the storyline. Brook has the hard years on his boxing clock and is a veteran of fights when it looked like he would never get a break. Brook has been patient, Spence has been waiting for an opening.

“There is nothing that Spence can do that Kell has not dealt with before — Kell will be there from the start and Spence has never had to deal with that,” insisted Dominic Ingle, the man in Brook’s corner and the man that saved the boxer’s career when he threw in the towel against Golovkin.

Make no mistake this is a special fight, two quality operators at or near their peaks. Brook is arguably the best welterweight in the world, perhaps just under Manny Pacquiao and Keith Thurman, and Spence is untouchable as the leading and most dangerous contender.

The British boxing business is currently saturated with great fights and this fight, which is not attracting the same wild attention that elevated Anthony Joshua and Wladimir Klitschko or even the carnival meeting between Tony Bellew and David Haye, would be the main event in most years.

Brook will have to prove that he has mastered the scales and Spence will have to deliver on his promise in a fight that could be the most difficult yet for both of the boxers.

Brook on points and then a lot of screaming is what I think will happen. Enjoy it.