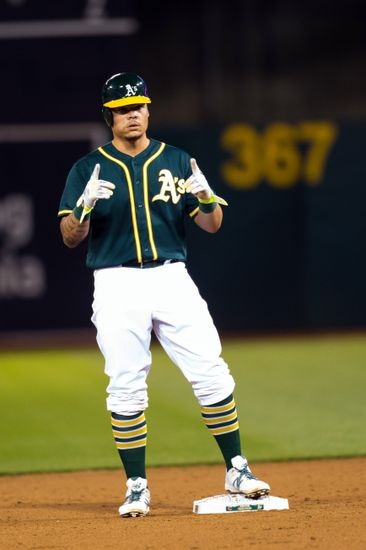 When Stephen Vogt was DFA’d, the blow of losing a fan favorite was softened some by the presence of Bruce Maxwell. It wasn’t a move driven just by a player well past his prime, its impetus was largely the presence of a prospect at the upper limits of the minor leagues, awaiting his turn in the bigs.

Maxwell was solid in his 2016 cup of coffee, and things looked good for him to take the reins when the time was right. That time came sooner than later, and Maxwell was finally awarded the chance to play in a traditional platoon catcher role rather than the sporadic at bats he’d seen previously.

As of late, Maxwell has been scuffling. A tough July turned into a brutal August, a month in which he’s hit just two extra base hits. Can he turn it around?

It’s no secret that Maxwell hits a ton of groundballs and it’s also not a secret that groundballs are by and large bad. In Maxwell’s promising 2016, his BABIP sat at a robust .368 in part fueled by his .306 average on balls on the ground. For comparison, the league is hitting just .249 on groundballs this year, indicating some of Maxwell’s previous success was luck related.

This year, Maxwell is actually hitting fewer groundballs. Good. Unfortunately, his BABIP has plummeted to just .161 on groundballs this year. He’ll probably find a few more holes than that, but with his lack of speed, he’s probably going to BABIP around .230 when he does hit the ball on the ground. With over 30% of his plate appearances ending that way, well, that’s a problem.

This is typically the part where you expect the silver lining, but unfortunately I just have more bad batted ball news.

Maxwell hits the ball the other way a fair amount. His overall opposite hit rate of 28.8% isn’t that high, it would rank around 30th in baseball if he qualified. If we dig a little deeper though, things get a bit more problematic.

So balls hit on the ground are mostly bad, but decent when going the other way. Balls in the air are fantastic when pulled and more or less groundball-like in result when hit the other way. Makes sense – it’s hard to get the ball out of the yard when going oppo. So how does Maxwell look?

Batted ball tendencies usually stabilize quickly, and Maxwell’s numbers look the same as they did last year in his limited time. These trends are unfortunately no fluke.

Maxwell has a lot of great traits, number one being that he’s a catcher. He’s got some leeway in how well he needs to hit thanks to his defensive value, and while the A’s have broken a record for wild pitches this year, he provides a lot with his glove. He’s young enough to improve and the pitching staff has (at times) seemed to have taken well to throwing his way. The intangibles of baseball are important and of course, impossible to quantify. We do know that the relationship between a pitching staff and its catcher can make a world of difference and if Maxwell can be that difference, we can cut him some slack with the bat.

That bat does have upside too. Maxwell is still a rookie after all, and an acclimation period to the best pitchers on earth is expected. His minor league track record is more than solid, and there’s no reason he can’t translate that to the bigs.

Maxwell rarely swings at balls out of the zone and his fantastic plate discipline isn’t a mirage. He’s always had a tremendous ability to take walks and wait for his pitch, something that’ll be amplified if he poses a more credible threat to pitchers. As we’ve seen across the organization, the ability to do so is paramount for big league success.

Worth nothing too is the frequency of swing changes. Numerous players in need of a change in direction or trajectory have done just that, and Maxwell is a prime contender to pull a Yonder Alonso. A conscious attempt to drive the ball more can go a long way.

Maxwell seems aware of the need to pull the ball, as noted in Melissa Lockard’s timely piece on him today.

“Being able to pull the baseball and being able to do a little more at the plate is I think what I am struggling with right now because I want to do it so quickly, but I think having success with that and being able to make this opposite field approach play – it always plays.”

He’s also got time to make more smaller adjustments. His proclivity for hitting the ball the other way looks to be part of a more defensive approach, which I’d wager is partially a function of being young and inexperienced. Go to the plate with more confidence? Maybe he starts ambushing early count fastballs or taking the occasional swing for the right field bleachers. Hope is not lost, but Maxwell needs to make a change.