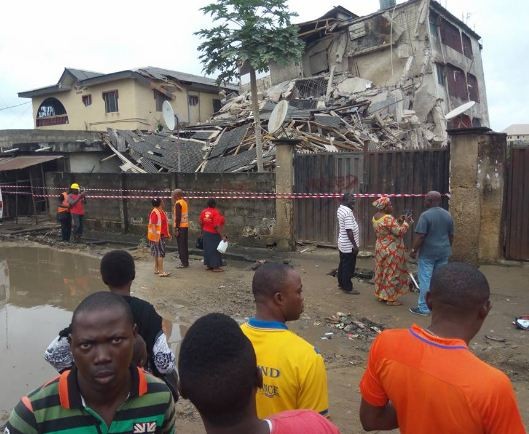 By Monsur Olowoopejo
Lagos—A three-storey building which was already marked for demolition by a building regulation agency in Lagos State, yesterday recorded a partial collapse in the Ojo area of Lagos.

Reports however said there were no casualties in the incident as residents had already deserted the building located at 21, Saka Okoro St., Ilufe Road, Alaba International Market, Ojo.

It was gathered that a portion of the building caved in yesterday morning, in a partial collapse.

However, government officials had commenced a full demolition of the building, as at the time of this report.

An official of LASBCA who sought anonymity, said that all occupants of the eight flats in the building had been served demolition notices for some time and that they had vacated the building before it eventually caved in yesterday morning.

The spokesman, National Emergency Management Agency (NEMA), Mr Ibrahim Farinloye, said that the collapsed building had been marked for demolition by the Lagos State Building Control Agency, LABSCA, in the last three months.

Farinloye added that the building might not have collapsed if the owner had complied with laws pertaining to building regulations in the state.

“All residents of the structure had evacuated the building since Monday evening, when it started manifesting distress signs.

“Operations are, however, ongoing at the premises for the retrieval of personal properties of the occupants,” Farinloye said.