Brook to have surgery on broken orbital bone 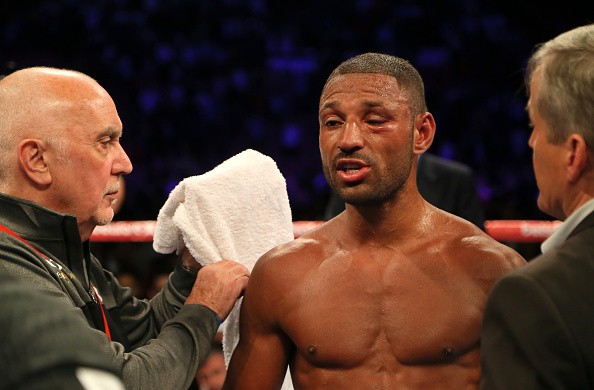 Brook told ESPN on Wednesday that he will have surgery to repair the injury on June 16.

Fighting at home in Sheffield, England, before a wild crowd of 27,000 at Bramall Lane Football Ground, Brook suffered the broken orbital bone and lost his world title in an 11th-round knockout loss to Spence on May 27.

Spence fractured Brook’s orbital bone in the seventh round, but Brook continued to fight. He was knocked down in the 10th round, and when the injury became too severe, Brook took a knee and was counted out in the 11th round of a fight in which he was behind on all three scorecards.

Kell Brook is set for surgery next week to repair an orbital-bone injury suffered when he lost his world title last month. Photo provided by Amanda Westcott/Showtime

It is the second fight in a row in which the 31-year-old Brook (36-2, 25 KOs) has suffered the same injury. He suffered a broken orbital bone around his right eye that needed surgery following a fifth-round knockout loss to unified middleweight champion Gennady Golovkin in September in London. Brook, who had no luck finding a marquee welterweight opponent, had moved up two weight classes to challenge Golovkin.

“I got caught on the left eye in the seventh, and it felt really bad,” Brook said after the Spence fight. “It was the one the worst feelings I ever had — kind of like when GGG hit me and fractured my orbital bone. It was devastating. I just couldn’t see.

After recovering from the surgery following the loss to Golovkin, Brook surprised many by returning to welterweight, where he has had problems making weight, to face Spence, who was his mandatory challenger.

Spence (22-0, 19 KOs), a 27-year-old southpaw, could make his first title defense in September to headline a Premier Boxing Champions card on Fox in Dallas, just 22 miles from his hometown of DeSoto, Texas.

“Hopefully I can have a homecoming in Dallas, maybe in September sometime,” Spence told reporters at a recent lunch in New York. “I’ve got to talk to my manager [Al Haymon]. Fighting at home in front of my fans, family and friends, that’s a dream come true, especially me having the title and bringing it back to Dallas, which hasn’t happened in a long time. That would mean a lot to me. That would be a dream of mine, too. Hopefully I can make that happen.”