Brexit: Theresa May vows to keep UK ‘strong and united’ 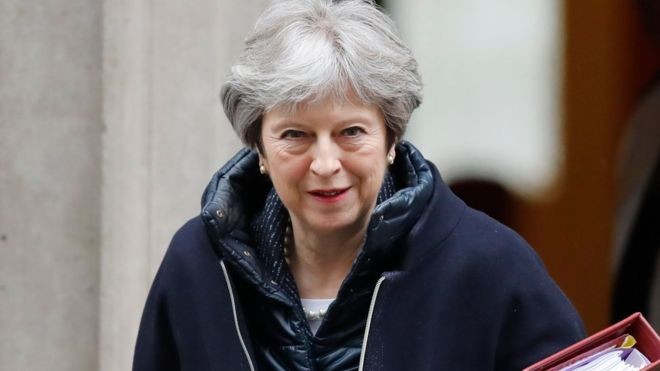 Brexit: Theresa May vows to keep UK ‘strong and united’

Theresa May has pledged to keep the UK “strong and united” after Brexit as she marks a year to go until the UK’s departure from the European Union.

The PM is to visit England, Scotland, Wales and Northern Ireland, appealing to those for and against Brexit.

There are just months left to strike a deal on the future UK-EU relationship.

And, with the Irish border remaining a sticking point, Mrs May will promise to ensure “no new barriers are created within our common domestic market”.

Since formal negotiations began between the two sides last June, an agreement has been struck on a Brexit “divorce bill” – but the crucial issue of how they will trade together has yet to be settled.

On 29 March 2019, the UK will formally leave the EU and is due to enter a 21-month transition period before the final arrangements kick in.

But first, the PM must agree a deal in Parliament, with a vote expected in October.

On Wednesday, shadow foreign secretary Emily Thornberry faced criticism from within her own party for saying Labour MPs would probably approve the government’s “blah, blah, blah” deal that would pass Labour’s six tests – which include maintaining benefits of the single market and customs union.

Meanwhile, speaking to the Independent, ex-PM Tony Blair has urged MPs to vote “according to what they genuinely believe”, even if it means defying their party.

On Thursday, Mrs May will visit a textile factory in Ayrshire, a parent and toddler group in Newcastle, have lunch with farmers near Belfast before meeting businesses in Barry, south Wales.

Speaking ahead of her trip, Mrs May will vow to regain control of “our laws, our borders and our money” and that the UK will “thrive as a strong and united country that works for everyone, no matter whether you voted Leave or Remain”.

The prime minister has been accused of a power grab by the Scottish and Welsh governments over plans to repatriate some powers from Brussels to Westminster rather than to the devolved administrations.

She insisted each of the devolved administrations would see “an increase in their decision-making powers” and that her government remained “absolutely committed” to the devolution settlements.

England, Scotland, Northern Ireland and Wales in a single day. The symbolism’s obvious enough: the UK is leaving the EU as one.

And Theresa May’s message is suitably upbeat: “I’m determined our future will be a bright one”, she said, ahead of her whistle stop tour.

The prime minister pledged to defend the integrity of the UK which, as it prepares to leave the EU, she (perhaps pointedly) described as “the world’s most successful union”.

Even so, ministers are still working overtime to convince the devolved administrations they won’t lose out after Brexit.

Mrs May also set out a vision of economic prosperity at home, and influence abroad, trading freely with friends and partners across Europe and beyond.

But with obstacles like an elusive agreement on managing the border with Ireland, and tough talks on trade still ahead – and Parliament’s final approval another potentially dangerous hazard for the government – the route to Britain’s final exit still looks, in many respects, far less predictable and well choreographed than Mrs May’s rapid journey today.

The PM also promised to “protect the integrity of the United Kingdom as a whole”, restating her opposition to a controversial EU proposal to keep Northern Ireland inside its customs union.

“That means ensuring that no new barriers are created within our common domestic market and that the UK is able to meet its international obligations in the future.

“No prime minister could leave these things to chance, because they are absolutely crucial to our success as a country in the future.”