Brexit: Theresa May pushes on with her deal after latest defeat 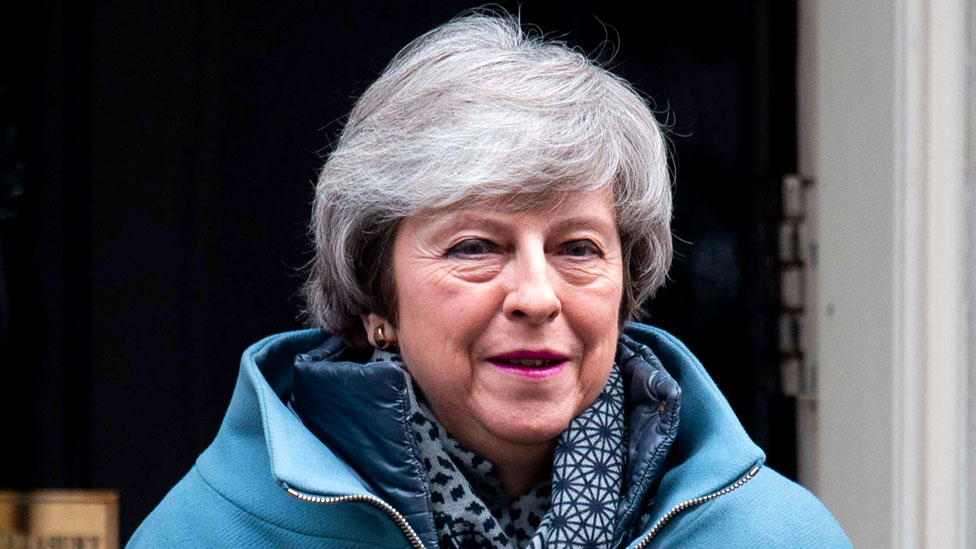 Theresa May will press on with efforts to secure a revised Brexit deal, despite another Commons defeat, and will return to Brussels “within days”.

MPs voted against a motion endorsing the government’s strategy by 303 to 258, with 66 Tory MPs abstaining.

Steve Baker, of the Conservative backbench European Research Group, which led the rebellion, called the loss a “storm in a teacup”.

Brexit Secretary Steve Barclay will met EU ambassadors in London on Friday morning before he heads to Brussels on Monday for further talks with the EU’s chief negotiator Michel Barnier.

Mrs May is trying to renegotiate the Irish backstop with the EU after MPs voted to replace it with “alternative arrangements” earlier this month.

Some MPs fear that the backstop – the insurance policy to prevent the return of customs checks on the Irish border – will see the UK will be bound to EU customs rules in the long-term.

The government motion on Thursday called for MPs to back its existing strategy, including seeking changes to the backstop, but ERG members believed voting for it would also see them endorsing calls to rule out a no-deal Brexit.

They say the option of leaving the EU without a formal deal is essential as “negotiating leverage” in Brussels, but a majority of MPs believe it would cause chaos at ports and massive disruption to business.

The EU has repeatedly rejected the idea of changing the backstop in the withdrawal agreement.

The latest government defeat has no legal force and Commons Leader Andrea Leadsom told BBC political correspondent Iain Watson that Mrs May would go back to Brussels in the coming days to continue negotiations.

She told BBC Radio 4’s Today programme the loss represented “more of a hiccup than the disaster that is being reported”, insisting: “The prime minister carries on.

“She will continue to seek those legally binding changes to the backstop that will enable Parliament to support our deal.”

But Labour leader Jeremy Corbyn has repeatedly argued that the prime minister is “running down the clock” while giving the pretence of making progress in EU talks.

The chair of the Exiting the EU committee, Labour’s Hilary Benn, said Mr Corbyn had made proposals for alternative ways forward, but Mrs May had rejected them to seek approval from Leave supporters in her own party.

“As long as the prime minister continues to try and keep the ERG on-side… we are not going to make any progress,” he told Today.

“There is not a majority in the House of Commons for leaving with no deal. We have to compromise.”

Defence Minister Tobias Ellwood told BBC Newsnight the ERG was a “party within a party… flexing it’s muscle” to take advantage of Mrs May’s lack of a Commons majority.

He called the group’s actions “irritating, provocative and… unnecessary”, saying that while the party was a broad church, they had “taken over the pulpit, the choir stalls and the bell tower”.

Mr Harrington said members of the ERG should defect to the Brexit Party, set up by former UKIP leader Nigel Farage – a move Mr Farage called “a jolly good idea”.

But Mr Baker, the ERG’s deputy chairman, told Today he was “standing up for what the majority of the people voted for”, while still “making enormous compromises”.

And despite the government defeat, he argued: “It’s still very clear that there is a majority in the House of Commons for a deal which replaces the backstop with alternative arrangements. The European Union should understand that.

“But they should also understand that there are those of us unwilling to vote to take a no-deal off the table.”

Please upgrade your browser to view this interactive

Former Attorney General Dominic Grieve accused the Conservative Eurosceptics of being “completely cavalier about the risks” of leaving the EU without a formal withdrawal agreement.

And he suggested a dozen or more ministers – including six in the cabinet – might resign if Mrs May refused to extend Brexit talks beyond 29 March, when the UK is due to leave the EU.

“My understanding is that many of them have made representations directly to the prime minister indicating their concern and telling the prime minister that if by the end of February there is no deal that has been got through the Commons, we ought to extend,” he said.

Asked whether she would resign if there was not a deal before the end of the month, Work and Pensions Secretary Amber Rudd said she planned to work with all colleagues to help the PM get her withdrawal agreement through Parliament.

As to whether the ERG were “traitors”, she responded: “No, certainly not.”

EU leaders still believe this is not the time to budge.

They see the UK arguing, debating and negotiating with itself again – as it has done so often during the Brexit process – rather than engaging with Brussels.

As a result of all this, the new round of EU-UK negotiations are going nowhere fast.

“Window-dressing” is how one senior EU figure described the talks to me, with each side simply repeating their red lines to the other.

So, the current favourite prediction in Brussels is that things will only be resolved in March.