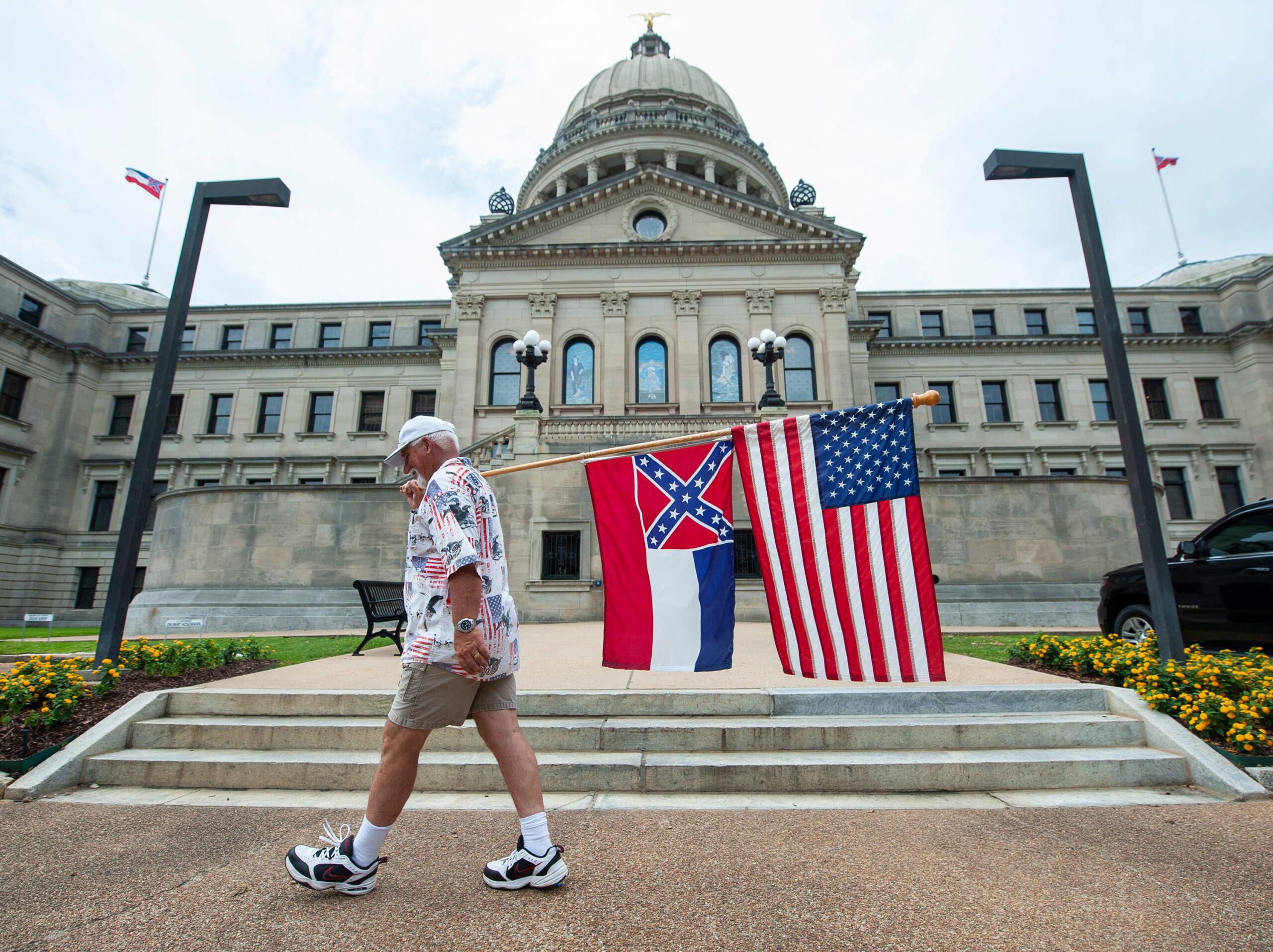 House Bill 1796 removes the current flag – the only remaining state flag to include the Confederate emblem in its design – and sets in motion the process of picking a new flag. The bill now goes to Gov. Tate Reeves for his signature. Reeves has pledged he will sign it.

The House voted 91-23 and the Senate 37-14 to approve the flag-change legislation. The historic vote followed days of heated debate and pressure from business and religious leaders, government officials, colleges and athletes to remove it.

“Today we and the rest of the nation can look on our state with new eyes, with pride and hope,” House Speaker Philip Gunn, a Republican, said following his chamber’s vote.

“Whether you’re Black or white, rich or poor, Democrat or Republican, I ask you today to stand in the name of history,” said Democratic Sen. Derrick Simmons ahead of the Senate’s vote. “Let’s vote today for the Mississippi of tomorrow.”

After Reeves signs the bill, the flag must come down within 15 days at government buildings around the state. Shortly after, a nine-member commission will be appointed by Gunn, Lt. Gov. Delbert Hosemann and Reeves to choose a new design, which must include the words “In God We Trust,” and cannot include the Confederate battle emblem.

Voters will then approve or reject that design in November. If they reject it, the commission would begin the process again. If they approve, the Legislature will ratify that design in the 2021 session, and a new official flag would fly next year.

Legislators adopted Mississippi’s state flag and its Confederate image in 1894, nearly three decades after the end of the Civil War. Mississippians voted nearly two-to-one in 2001 to keep the current design.

Sunday’s outcome to remove it was all but assured after lawmakers had secured a two-thirds majority to suspend the rules and consider the flag change legislation a day earlier. A handful of additional representatives voted to change the flag Sunday compared with Saturday.

One of them was Rep. Jerry Turner of Baldwyn, the Republican chairman of the committee where the flag legislation originated. He said he’d struggled with how to vote. He prayed and there were tears as he conferred with his wife in recent days. In the end, he decided that removing the flag could be compared to stepping onto a “train of unification.”

“That’s what we all prayed for, that’s what we all talked about,” the white lawmaker told his colleagues before the vote. “Today, you can get your ticket for that train of unification. And that train is headed for a destiny called unity. I don’t know about you today, but I want to be one of the first ones to get my ticket to be on that train.”

Gunn told reporters he knew some Mississippians thought they would never see the day the flag changed. Some, he said, had left the state over the flag. He said he hoped those people now consider “coming home to a better Mississippi.”

Rep. Trey Lamar was among the first prominent Republican lawmakers to publicly push for flag change legislation in recent weeks. On Sunday, he watched closely as Gunn spoke to the media following the historic vote.

“It was something I knew in my heart for a long time was the right thing to do, and would come eventually,” Lamar said. “But when outside groups, the SEC, the NCAA seriously start making decisions that are going to hurt our students, hurt our businesses that support those communities, that provided the opportunity for this discussion to rise to another level.

“It wasn’t the reason to make the change,” he added, “but it provided us with an opportunity to have this discussion on a very serious level.”

Rep. Robert Johnson said the vote and the discussion that led to it helped bridge racial divides in the legislature. The House Democratic leader, who is Black, said some of his white colleagues in recent days had begun “to understand and feel the same thing that I’ve been feeling for 61 years of my life.”

Now that the flag has finally been changed — several Black lawmakers have unsuccessfully filed legislation to change it for years — more focus can be placed on the state’s high poverty rates and its poor health outcomes, Johnson said.

In recent days, accusations of spinelessness and political trickery poured gasoline on what was already a bonfire.

The House was expected to originate the flag legislation but had not done so by Friday afternoon. Meanwhile, the Senate was having a relatively normal session Friday, with no expected discussion of the flag.

England said he felt compelled to respond to his fellow Republican Chris McDaniel, a pro-flag senator who warned supporters Thursday about “a very slick and a very well-funded campaign right now to change the minds of senators and House members.”

“Look, these are the days you find out who has a backbone,” McDaniel said in a video posted to Facebook.

England spoke slowly and deliberately from the podium on the Senate floor. He never mentioned McDaniel but stared directly at him. McDaniel crossed his arms and stared back. England said he would never accuse a fellow senator of lacking “backbone.”

“I’m here,” England said. “… Backbone in place, standing as strong as I can under this dome.”

No one threatened him or promised him anything over the flag question, England said.

Instead, he said he has spent considerable time praying over the state flag.

“Let me just be blunt: This flag, if we let it, it’s going to tear us apart,” England said.

“That flag is going to change. It’s going to. But the longer we put it off, the worse it’s going to be on all us in this room.”

McDaniel then responded. He said he respects England and his position: “Your position is one of strength.”

According to McDaniel, his comments about spinelessness were directed at people who refuse to debate this issue openly.

“All I was pointing out is that we have so many people in this room that are always trying to duck the issue and dodge the issue,” McDaniel said. 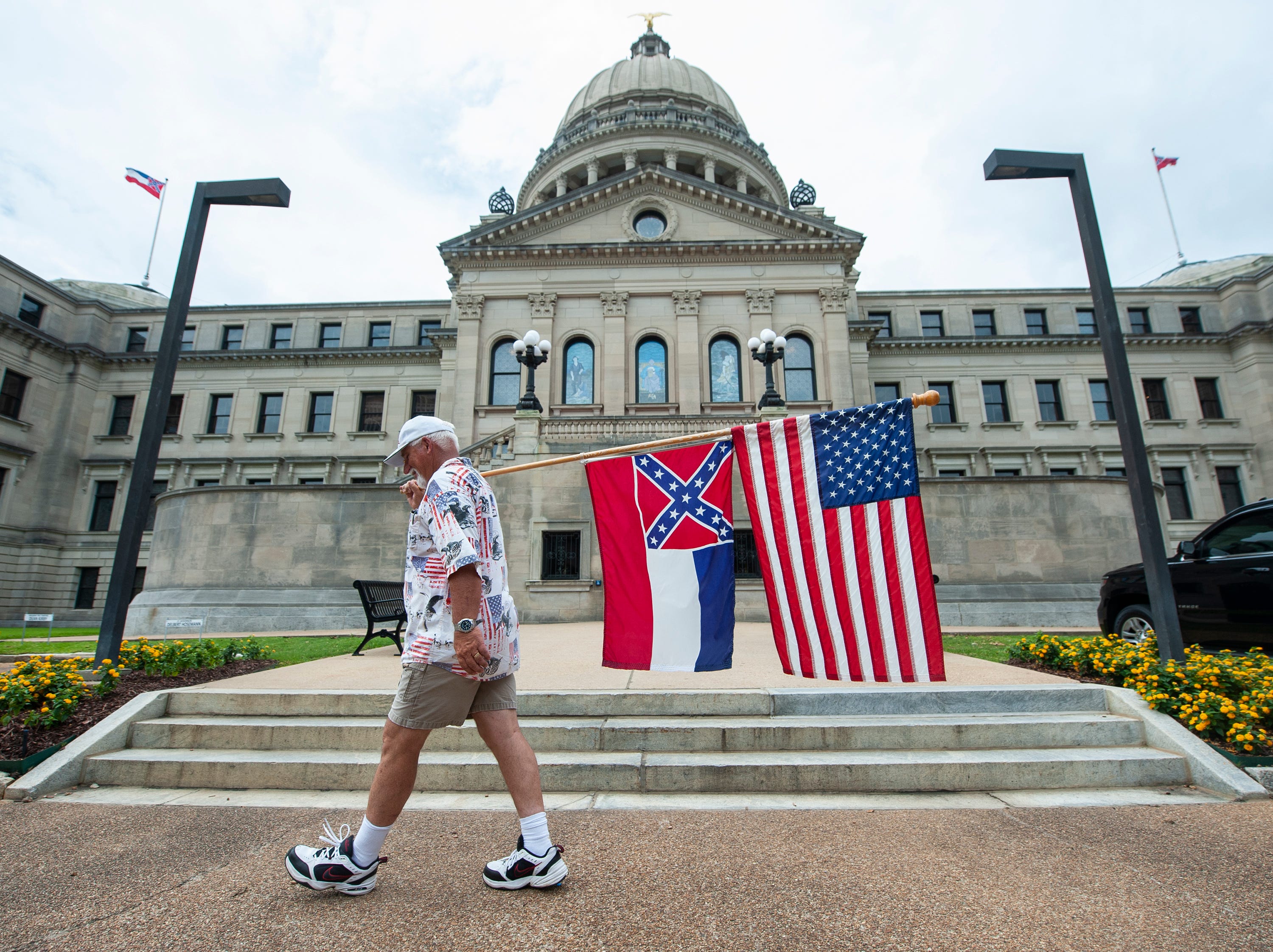