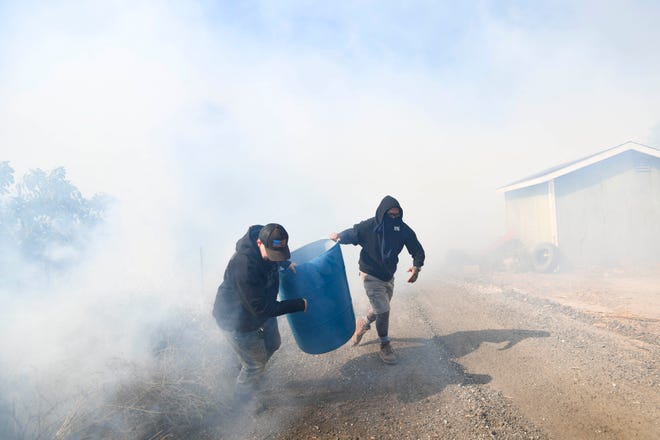 LOS ANGELES – The hurricane-force wind gusts that fanned at least 10 wildfires across the state were easing Thursday, providing a modest respite for firefighters and residents overwhelmed by evacuations, preemptive power outages, and extreme fire warnings.

More than 106,000 people were without power Thursday evening because of an unrelenting series of planned outages aimed at limiting fire risk. Still, downed and sparking wires were suspected of igniting some of the blazes.

“The winds have already let up somewhat in Northern California,” Walker said. “They should diminish in Los Angeles by Friday.”

The end of the wind event should also bring more amenable temperatures for firefighters who have at times been battling blazes in intense heat. But the news isn’t all good.

“Any significant rain remains two or three weeks away,” Walker said. “We won’t see more humidity. And another wind event could be coming in the middle or late next week.”

Weather conditions continued to create problems Thursday night when a brush fire erupted on South Mountain, near Santa Paula and Somis in Ventura County. The Maria Fire consumed about4,000 acres in just three hours and crews had no containment. Officials ordered 7,500 people to evacuate as the fire threatened 1,800 buildings.

The number was down markedly from more than 200,000 last week, thanks to firefighting efforts that have allowed many residents to return home.

Southern California, however, remained cloaked in an unprecedented “extreme red flag warning” as winds fanned at least three major blazes. But as Santa Ana winds continue to threaten the southern part of the state, Southern California Edison warned that more than 223,000 customers could lose power in an effort to prevent its equipment from sparking wildfires.

More than 41,000 customers were without power Thursday, the company said. The utility acknowledged the Easy-Fire, northwest of Los Angeles, broke out near its equipment, although the cause of the stubborn blaze remained under investigation.

In Los Angeles, a $107 million Emergency Operations Center housed in a special building east of City Hall is the nerve center for the city’s wildfire monitoring and control system.

The EOC has been opened for a series of wind-driven brush blazes this month: The Saddle Ridge Fire burned 8,799 acres and destroyed 19 structures. The 40-acre Palisades Fire crept right up to homes. Then, most recently, came the Getty Fire, which destroyed several homes and burned near the Getty Center, a prominent art museum in the city.

The center is activated as soon as a major fire is threatening, and until it’s up and running, a lot of the action takes place on a special smartphone.

“You won’t believe what it’s like carrying this phone when the fire breaks out,” said Chris Ipsen, who helped put the center together. “Your heart is pumping like crazy.”

Here is a look at some of the major fires raging across the state.

Winds blowing 25 to 35 mph spread the blaze down both sides of South Mountain, toward Santa Paula as well as Somis. Firefighters were working to contain the Easy-Fire about 15 miles away when the blaze ignited at 6:14 p.m. local time.

About 250 firefighters from the ground and air were battling the wind-driven brush fire on Thursday night, according to the Ventura County Fire Department. Officials opened four evacuation centers, including three for animals.

The fire broke out early Thursday in San Bernardino County and within hours grew to a 5-mile radius and had “entered neighborhoods,” the fire department said. It was 50% contained on Thursday.

At least six homes burned, and officials lifted evacuation orders for about 1,300 people. More than 500 firefighters were battling the blaze, including a water-dropping helicopter team. An evacuation center for those fleeing the fire, burning about 60 miles east of Los Angeles, was set up at Pacific High School.

Crews reported 60% containment of the fire Thursday, and officials lifted all evacuation orders for 30,000 people. More than 7,000 homes were threatened.

The fire came dangerously close to the Ronald Reagan Presidential Library, spokeswoman Melissa Giller said, but it was saved by a shift in the winds – and the work of goats brought in every year to create a fire break by chewing through vegetation surrounding the complex.

In Sonoma County, north of San Francisco, subsiding winds aided firefighters battling the wine country blaze that sparked a week ago. Officials lifted evacuation orders, allowing all but about 6,000 people to return home. The 120-square-mile wildfire had forced 200,000 people to flee after “Diablo” winds conspired with dry conditions.

The Kincade Fire had destroyed more than 280 buildings, including a 150-year-old winery, and was 65% contained Thursday. Emergency officials warned about 60,000 people to be prepared to evacuate if conditions change, but Cal Fire Division Chief Jonathan Cox said crews are optimistic.

In Los Angeles County, fire officials also lifted some evacuation orders for the Getty Fire, which had forced residents of more than 7,000 homes to flee earlier in the week. Containment was at 39% Thursday.

Mandatory evacuations were lifted for areas near a Riverside County fire that grew to 300 acres and was 50% contained Thursday, fire officials said. Riverside Police spokesman Ryan Railsback said two suspects driving a stolen car face arson charges after they drove into a field, igniting the blaze. 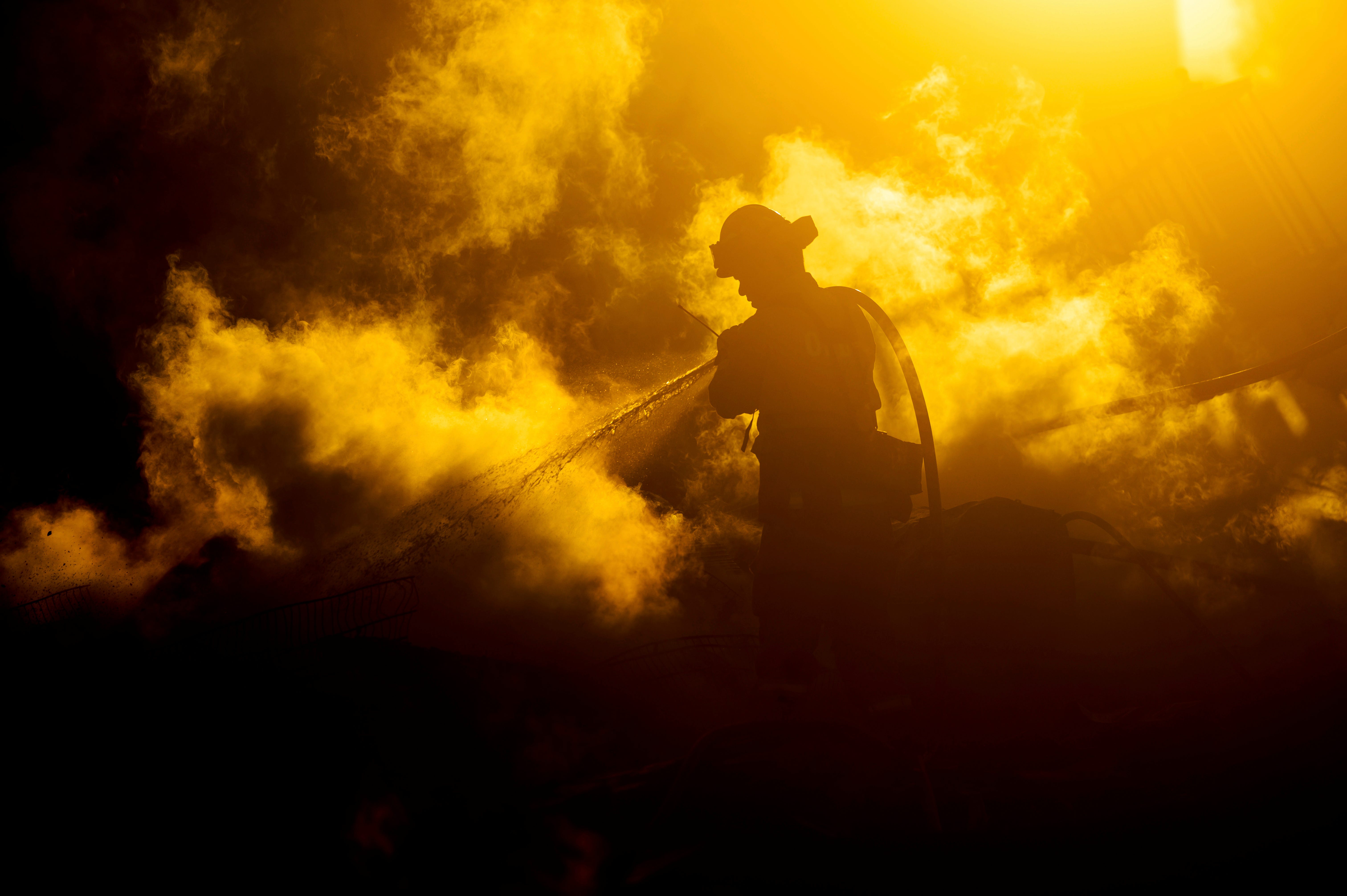