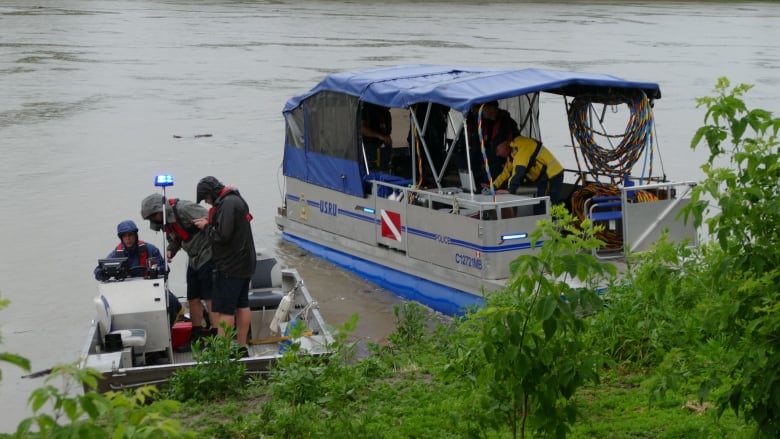 The body of a nine-year-old boy who went missing after going into Winnipeg’s Red River on Friday afternoon has been found in the water, police said on Sunday afternoon.

Darius Bezecki was biking with two brothers and a friend near his home when all four ended up in the river, Const. Jay Murray told a news conference Saturday morning. Three of the boys were able to get out, but Darius didn’t make it out of the water, the officer said.

“It is incredibly sad and the outcome no one was looking for. Our thoughts are with his family,” Murray said in an emailed statement sent to media on Sunday.

Police have notified next of kin, he said.

Paramedics and police responded to reports just after 4:30 p.m. Friday of someone in distress in the river near the Louise Bridge, Murray said on Saturday. Crews had four boats in the water, and 12 police cruisers were searching the banks of the river, he said.

Water rescue crews, a sonar boat and a drone with thermal imaging technology were being used in an attempt to find the boy. Murray said on Saturday that search crews were still focused on the immediate area around where Darius was last seen.

Later Saturday, police told CBC News that a few “items of interest” were found near the area where underwater searchers dove earlier that day. That location is considered a high-risk dive due to murky waters and fast-moving debris.

Five chapters of the Bear Clan Patrol in Winnipeg were gathered near the bank of the muddy waters on Saturday evening while the Mama Bear Clan, another volunteer group, sent some grandmothers to pray and sing by the water as the sun set for the night.

A post on the Bear Clan’s main Facebook page on Sunday afternoon thanked those who helped out in the search and offered thoughts and prayers for Darius’s family.

The family was notified at about 1:30 p.m. on Sunday that the boy’s body had been found, a volunteer searcher said.

Darryl Contois said someone fishing along the river spotted Darius and contacted the police.

Contois said he was told that Darius was found in the water about three or four kilometres beyond the city’s north perimeter. The Winnipeg police dive team recovered the body and informed the boy’s family, Contois said.

“The family are very distraught for the outcome, you know, but at least he’s not in this river. My heart goes out to each and every one of them,” he said.

Contois said the family remained at the search site throughout the weekend as searchers scoured the fast-moving, murky waters and rough riverbanks, creating their own trails through the thick brush and swampy terrain.

He thanked all of the individuals and groups that came out, and expressed appreciation for the volunteers who delivered food and water.

The medical examiner will be reviewing the boy’s body for the next couple of days, and Contois said he explained to the family that they cannot see him until that examination is complete.

“Two days is not a long time, but two days is a lifetime for a mother to have her loved one. Same thing with the father,” he said.

Contois said he will be in contact with the family to support them and discuss plans for a funeral.

The Bear Clan posted on its Facebook page Sunday afternoon, saying the family had requested drummers and singers attend a sacred fire near the Louise Bridge on Sunday evening.