Boris Johnson: UK will not retreat from global community 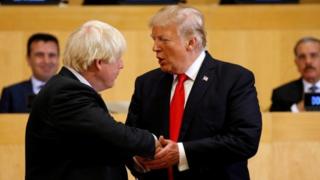 The UK will not “retreat” from the international community as it leaves the EU, Boris Johnson has said.

The prime minister was speaking ahead of this weekend’s G7 in France, his first international summit as leader.

On Friday, he and Mr Trump spoke by phone and discussed “foreign policy issues and global trade”.

The G7 meeting in Biarritz – a get together of most of the leaders of the world’s largest economies – comes with just over two months until the UK is scheduled to leave the EU on 31 October.

Mr Johnson will meet Mr Tusk on Sunday in their first face-to-face meeting and spell out his absolute commitment to getting the UK out of the EU by that date.

Ahead of the summit he insisted the UK would be an “energetic partner” on the world stage after Brexit.

Mr Johnson said: “Some people question the democratic decision this country has made, fearing that we will retreat from the world. Some think Britain’s best days are behind us.

“To those people I say: you are gravely mistaken.”

But the British side is adamant it wants to secure the right deal rather than a quick agreement.

In any future trade deal, the UK wants protections for the NHS and animal welfare standards, but also wants to cover issues such as opening up agricultural markets, services and public procurement.

A UK government spokesman said: “Of course we want to move quickly, but we want to get the right deal that works for both sides.”

A No 10 spokesman said Mr Johnson and Mr Trump “looked forward to speaking further” during one-on-one talks on the sidelines of the summit on Sunday morning.

The G7 summit follows a hectic week of diplomacy for Mr Johnson, who visited Paris and Berlin in an effort to persuade the EU to amend the withdrawal agreement it reached with his predecessor Theresa May.

The prime minister wants to renegotiate the Irish backstop – a key Brexit sticking point which is part of the agreement and aims to prevent a hard border on the island of Ireland after Brexit. The EU has consistently ruled this out.

If implemented, the backstop would see Northern Ireland staying aligned to some rules of the EU single market, should the UK and the EU not agree a trade deal after Brexit.

Mr Johnson previously said that would mean “signing away” the UK’s “economic independence”.

At a news conference on Wednesday with Mr Johnson, German Chancellor Angela Merkel suggested an alternative to the backstop might be achievable, adding that the onus was on the UK to find a workable plan.

But the next day Mr Macron said it was “indispensable” to preserving political stability and the single market.

After visiting his counterparts, Mr Johnson said there was “new mood music”, but reaching a new deal would not be “a cinch”.

He has insisted the UK will leave the EU by the end of October, whether or not a new deal is reached.

Meanwhile, Labour leader Jeremy Corbyn accused the prime minister of putting the UK at “the mercy” of a US administration that “threatens peace, prosperity and the future of our planet”.

He also accused G7 governments of being key drivers of global inequality and called for them to do more to tackle climate change and reduce inequality.

“The UK should use its position in the G7, on the UN Security Council and the international financial institutions to promote policies to tackle the climate emergency and that are proven to reduce inequality and improve lives around the world, including universal healthcare, education and social security,” he said.

“Instead, this weekend we’ll see the ugly spectacle of our prime minister pursuing his Trump-first policy, putting us at the mercy of a US administration that threatens peace, prosperity and the future of our planet.”

The G7 summit, which comprises the UK, Canada, France, Germany, Italy, Japan and the United States, runs from Saturday to Monday.

Issues on the agenda include the global economy, tackling inequality and responding to the challenges of the digital age and the rise of artificial intelligence.

On Friday, Mr Macron – who is hosting the summit – and Mrs Merkel said the ongoing fires in Brazil’s Amazon rainforest must be discussed among the G7 leaders this weekend.