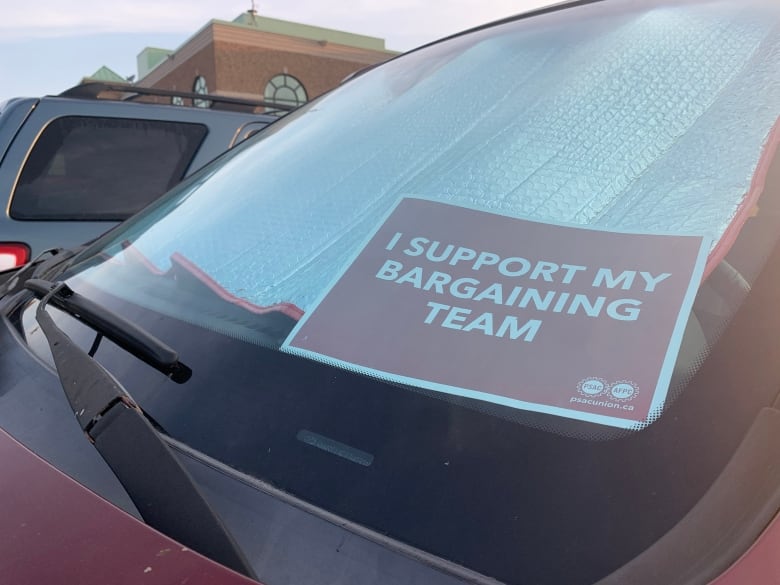 Border service officers have begun work-to-rule action while unions and the government continue to negotiate a new contract.

The Public Service Alliance of Canada (PSAC) tweeted this morning that bargaining took place throughout the night and into the early morning, but a deal has yet to be reached.

“In the meantime, work-to-rule actions have started across the country,” the tweet said.

Our FB bargaining team has been at the table all night, and we’re giving them a bit more time to negotiate. <br><br>In the meantime, work-to-rule actions have started across the country. We’ll provide an update as soon as possible. <a href=”https://twitter.com/hashtag/cdnpoli?src=hash&amp;ref_src=twsrc%5Etfw”>#cdnpoli</a>

While operating under work-to-rule, border officers could stop collecting taxes and duties, ask travellers more questions than usual and fully inspect truck manifests, slowing down processing times as a result.

The union’s members — who have been without a contract since June 2018 — include border service officers at airports, land entry points, marine ports and commercial ports of entry, inland enforcement officers, intelligence officers, investigators, trade officers, hearings officers and non-uniformed members.

A spokesperson for the Treasury Board Secretariat told CBC that negotiations are still ongoing and the government “is still at the table and will not walk away.”

President of the Treasury Board Jean-Yves Duclos tweeted Friday morning that he is “proud of the work of our negotiating team.”

“They’ve been at the table all night and we’re still hoping to come to an agreement that is fair and reasonable,” he said.

Proud of the work of our negotiating team. <br><br>They’ve been at the table all night and we’re still hoping to come to an agreement that is fair and reasonable with the representatives of border agents.<br><br>We have no intention of leaving the table. <a href=”https://twitter.com/hashtag/CdnPoli?src=hash&amp;ref_src=twsrc%5Etfw”>#CdnPoli</a>

PSAC and the Customs and Immigration Union (CIU) represent roughly 8,500 border workers. The work-to-rule action will see agents performing only the minimum amount of work required by their contracts.

That change goes into effect on Monday, Aug. 9.

Members of the unions voted to strike in late July. The unions have been fighting primarily for three things: salary parity with other law enforcement workers in Canada, better protections against harassment and discrimination, and a remote work policy for non-uniformed members.

The strike would have a “dramatic impact” on the border reopening and on Canada’s supply chains, the unions have warned.

The border will remain open, since 90 per cent of border agents have been identified as essential workers. However, travellers can expect long lineups and delays at airports and border crossings, the unions say.

A spokesperson for PSAC told CBC that the work-to-rule action will continue until a deal is reached.

A spokesperson for CBSA told CBC News that the job action likely will result in delays at the border and travellers should plan for longer processing times.

“The Agency thanks travellers and businesses for their patience,” the spokesperson said in an email.

Alissa Howe, president of CIU Local 18 in Windsor, Ont., said earlier this week that border officers may be doing “more questioning, more examination” of drivers crossing the border, and that they may have fewer lines open.

The Ambassador Bridge connecting Windsor and Detroit is the busiest border crossing between Canada and the U.S., carrying one quarter of all trade between the two countries.

Rakesh Naidu, president and CEO of the Windsor-Essex Regional Chamber of Commerce, said the free flow of goods and services would be affected by job action.

“Even though the border may not be fully closed, it will lead to delays and the delays will cost us,” Naidu said.

Truck driver David Ferreira reported from the Ambassador Bridge this morning that traffic had slowed to a crawl.

Ferreira said crossing the bridge usually takes 15 to 20 minutes but he’d been left waiting for half an hour and predicted it could take three.

“We’re just moving slightly here a little bit, but due to the strike here, traffic’s backed right up and over the bridge onto the freeway,” he said.