Turned around at the U.S. border, forced to quarantine for 14 days: An Ontario man’s ‘ridiculous’ ordeal 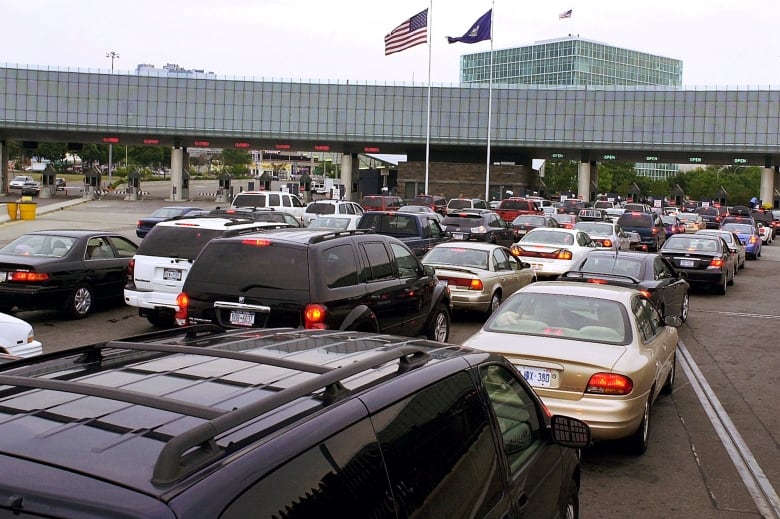 An Ontario man is speaking out about what he calls an “illogical” situation after being forced to quarantine for 14 days  even though he was denied entry into the U.S. — and never made it past the border.

Prasanth Ramthilak, an engineer at a beverage company, was headed from Mississauga to one of his employer’s sister sites in New York for a meeting earlier this week, with a letter in hand from his employer stating that the trip was essential.

When he arrived at the Rainbow Bridge crossing in Niagara, U.S. border guards said they couldn’t deem his trip essential and forced him to head back home.

But it was after Ramthilak was turned around that he says he found himself caught in an absurd web of COVID-19 policies.

Despite the fact that Ramthilak was fully vaccinated (with a combination of Pfizer and Moderna shots) for more than two weeks, Canadian border guards told him he would have to quarantine for 14 days as well as provide two negative tests eight days apart.

“My personal opinion is that this is illogical,” he told CBC News.

“If had spent time in the States, like a couple days, and got back and they made me quarantine, I would have been like, ‘OK, you know what, that probably makes sense.’ But 10 to 15 minutes, turn around and then it’s like 14 days… Really?”

Ramthilak’s case isn’t the first such incident at the border during the pandemic, though it may be one of the first since vaccines were introduced. In December, two hockey moms and their sons were ordered to quarantine after inadvertently arriving at a border crossing to the U.S. while using their GPS. Soon after, the government reversed the order and granted them exemptions.

When Ramthilak attempted to cross into the U.S., he says border agents asked him to step into the Customs and Border Protection (CBP) building to explain the reason for his trip.

In all, he says he was inside for 10 to 15 minutes before being refused entry.

But when he tried to get back home, he says the agents on the Canadian side asked him if he’d filled in the ArriveCan mobile app, which travelers must fill in to enter Canada.

Ramthilak, a permanent resident, knew about the mobile form, but since he hadn’t technically crossed into the U.S., he hadn’t filled it in to return.

He explained that he hadn’t crossed into the U.S. but had been turned around after 15 minutes or less speaking to U.S. border guards. Besides, he says, he couldn’t exactly stop in the middle of the two crossings to fill it in.

Still, he says the guards told him that since he’d stepped out of his car and gone into the office, he had to quarantine.

Having received two doses of a COVID-19 vaccine, Ramthilak should have technically been exempt from quarantine under the federal government’s rules, but he says the guards “weren’t interested” in allowing him to show his proof of immunization.

“I think it’s just ridiculous — it just seemed like they wanted to pick something as a reason to have me quarantine and that app seemed to be that reason,” he said.

For Kelly Sundberg, a professor at Mount Royal University who spent 15 years as an officer with the Canada Border Services Agency, the case is “a glaring example” of the need for independent oversight of the CBSA.

Ramthilak could file a complaint to the agency itself, but Sundberg says the process isn’t impartial and more often than not officers are cleared of any wrongdoing.

CBC News reached out to the CBSA but did not receive a response in time for publication.

The federal government has indicated it wants to implement an oversight body for the border agency, but to date that hasn’t happened.

“This sounds like a couple officers … either were a bit overzealous or didn’t use common sense,” Sundberg said. “He did not enter the United States … therefore he didn’t leave Canada, technically. He was bounced back, he should have been processed accordingly.”

Sundberg went on to say that if he were in Ramthilak’s shoes, he would simply ignore the quarantine measures, adding it would be difficult to make a case against him given he never actually left the country.

“I would ignore it, if this happened to me,” Sundberg said. Violating the Quarantine Act is a federal offence and could lead to up to six months in prison and/or $750,000 in fines.

With three days of quarantine down and another 11 to go, Ramthilak is taking his situation in stride and trying to make the best of it.

He says he did reach out to the Public Health Agency of Canada for assistance, but says he was told it couldn’t do anything to reverse the CBSA’s decision.

“It’s not the end of the world, I’m not fighting for my life or anything,” he said. “It’s just unfortunate.”

Ramthilak said, “To add insult to injury, my test results came back negative.”