Between peace, conflict and human progress 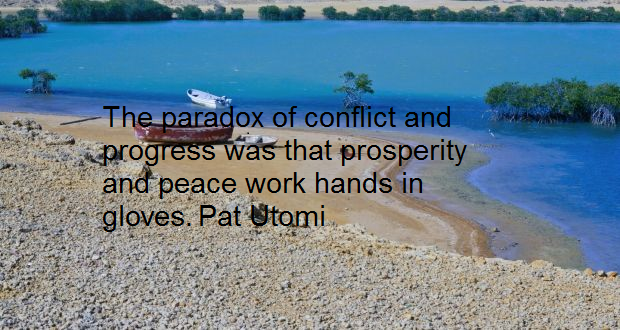 In many ways, paradoxes mark our quest as humans. We are frightened of the trauma of war and speak romantically of peace. But we desire prosperity and much of man’s material comfort has come from research into the tools of war and the creative entrepreneurial juices that flow from adverse conditions that conflict produces. Should we then proselytise conflict that we may find progress of the proportions of discovering penicillin, which can become a grand historic signpost of Man’s escape from misery?

These thoughts dominated my reflections as I accepted the invitation from the Centre for Peace and African Conflict Resolution at the California State University in Sacramento, USA.

In the hours before I jumped on the plane in Lagos, I had to address the important issue of Community Development Associations, and development, especially in the face of the failing state and the challenge of the youth bulge in a country where the “triumph of politics” and the triumphalism of self-focused political actors was clouding up the public agenda with irrelevancies when the elite should be in conclaves of sober reflection on a way forward as the Nigerian narrative was shifting to discontent writ large. Chido Onuma’s book, We all Biafrans now, it seemed, captures the soul of the democratisation of discontent in Nigeria. But like Nero in Rome, the politicians seemed to be fiddling away in acts of self-love suggesting narcissism had found home in Nigeria.

I could not but think of the “Sac State” remarks as I gave the talk in Lagos. Is the power elite in Nigeria fiddling and inviting Robert Kaplan’s image of a coming anarchy in West Africa with the politics of now? But I had to get to London and reflect on 50 years since one big conflict we have worked very hard to pretend did not quite happen, the most underreported genocide of the 20th century – The Nigerian Civil War, also known as the Nigeria-Biafra War.

Word was out that I was US-bound from London, so a quick request to address a section of Nigerian professionals in Atlanta, en route to a UNESCO conference in New York before arriving Sacramento. No thanks to what I chose to eat at an Italian restaurant in London, the hop across the big pond was great misery, as food poisoning left me calling for a doctor on arriving Atlanta.

Thanks to a regime of antibiotics, I survived the Atlanta dinner that went from 7pm to past 1am. Leadership failure of the class of 1966 and how Nigeria failed to claim the promise of its founders, reversing prospects, in comparison with the Asian peers of the 1960s, like South Korea and Indonesia, seemed to fascinate this particular grouping of “the most highly educated migrant population in the United States, the Nigerians.” Evidently, in “the generation that left town”, as I often call those who were migrated in the face of leadership since 1966. The class of 1966 which has established “state capture” for 50 years have run Nigeria in a way that made these Nigerians ship out of town but seemed to remain concerned with how to salvage the mothership. The number that gathered at the home of the World Igbo Congress Chairman, Joe Eto, to welcome me, at such a short notice was a true surprise

Seemed wise that my hotel was at the airport because a “hurry up offence” was required to make the flight to New York. It was as I waited to give my remarks in New York, sitting by the Deputy Governor of Plateau State that my thoughts for the “Sac state” remarks took shape. I thought, in beginning with praise for the work the leadership of CAPCR, I should create conflict in the thinking about peace: from pacifiers like British PM Neville Chamberlain, whose positions literarily were a boost for war monger Adolf Hitler, and make the point that the great call to humanity at creation dawn (Gen 2: 15; for people of a Christian persuasion) was to be co-creators with God moving creation towards its perfection. Yet, much material progress has come from conflict situations. I will then be provocative and ask if peace was not overrated. If war brings so much material progress from science, as was the case with Biafra, and wars elsewhere, should man seek war that he may make progress?

I had taken for reading on the flight over, a volume of the Harvard Business Review compilation on succeeding as an entrepreneur. One of the articles in the volume by Bhaskar Chakravorti was appropriately titled, “Finding Competitive Advantage in Adversity.” It seemed a good point to pitch the economic growth benefits of conflict.

With enough anxiety, hopefully established, about where I was going, I would then move to show that most of history, man has fought many wars but has very modest gains from war. Indeed, some of man’s biggest gains were ruined by war and lost to civilisation. Showing how years of war led Europe to the resolve of the Peace of Westphalia in the 17th century, allowing the emerging sovereign nation states create conditions that led eventually to James Watts’ redesign of the steam engine; and the power-based production it enabled, which gave us the Industrial Revolution. In the quarter of a century since the steam engine, man made more material progress than in several thousand years before, during which “war without end” defined man.

No doubt, the Industrial Revolution raised the appetite for colonisation and the conflicts of colonial domination. But its immediate effect was to trigger the disruption of how we transform the goods of the earth, a conflict of disruption that would, especially with the Moving Assembly line at the onset of the 20th century, universalise access to these goods. New products would come to more people. Those who had made the “Great Escape” from misery, in Angus Deaton’s terms, and whose material comforts had gone up significantly, the evidence suggests were less likely to be dogs of war. Indeed, many of the wars to advance their interests after World War II were carried on at their behest, by surrogates as we saw, in the ideology-inspired conflicts of the second half of the 20th century, in Africa, Asia and Latin America. So, the prosperous desire and secure peace, and prosper but the deprived fight on, as in the resource-fuelled conflicts of Africa.

The paradox of conflict and progress was that prosperity and peace work hands in gloves. But the prosperity from adversity is largely one in which the new conflict is a conflict of competition of ideas, options on how to draw from man’s native genius to create wealth, mindful that externalities associated with options of wealth creation question the sustainability of how we dwell in a planet challenged.

But I could not manage to tell them all this. Five minutes into establishing the paradox of conflicts, small and big; from West Africans quarrelling of whose Jollof rice was the real deal to Robert Kaplan anticipating Fulani herdsmen and Boko Haram in his book, The Coming Anarchy, I felt a surge of dehydration run from head to toe. But I had enough presence of mind to remember that the place of the family, the ultimate school of values, was critical to a world that could better manage conflict.

So, I turned to reminding all of a rapidly changing world and that, as Rewans axiom reminds us, to survive such change, the rate of learning ought to be equal to or greater than the rate of change in the environment. The school of character building, the family, has to orient the next generation on the dignity of human person and the cost of conflict, from wanting to dominate and abuse others. The biggest challenge for managing conflict is the value frame that predominates. A zero sum mindset and disregard for the rule of law produces a regime of impunity that plays out in bitter feuds that can run for generations. In the Balkans, for example, they can date back hundreds of years. To build families that play the socialisation rule with an abundance mentality, and high regard for the dignity of the human person, and set the goal of a civilisation of love, is to have a society primed for harmony.

I could then hurry off the stage in search for water in the hope that I would have stirred the many Africans present to consciousness about an area of competitive advantage: Keeping the family strong and cultivating it as a school of values. But I could not but wonder, from there, about so many of the “wrong” conflicts currently raging in Africa. Clearly, the future is bright for those who learn and to be disruptive in value creation. That conflict is the necessary and useful conflict; Africa must seek to replace the brutal conflict of military shooting wars for the purpose of dominating others.