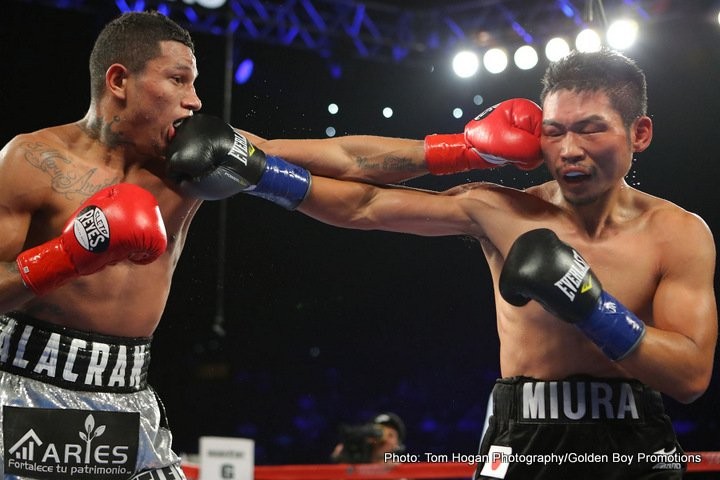 Berchelt and Miura set up the mandatory fight by both winning hard-fought battles on the same Jan. 28 card, with Berchelt inflicting severe cuts on Francisco Vargas and stopping him in the 11th round to win a 130-pound belt and Miura outslugging Miguel “Mickey” Roman in the co-feature en route to a 12th-round knockout victory in a world-title eliminator.

When it came time to face each other, the bout was not nearly as competitive as those previous fights as Berchelt, the favorite among the crowd of 5,846, did a great job staying away from Miura’s power left hand while also strafing him with left hooks round after round.

“I knew it was going to be a tough fight, but I was always the better fighter,” Berchelt said through an interpreter. “I’m very happy for the win. I knew I was going to win. Miura has the toughest left hand in the division, and he was hitting me and hurting me sometimes.”

Late in the fight, they traded wicked body shots, but Miura’s were obviously taking a greater toll. Berchelt was clearly winning the fight but slowing down because of all the damaging blows to his body. But Berchelt (32-1, 28 KOs), 25, of Mexico, shook them off and maintained control to the final bell to retain his title for the first time.

“I prepared very well. I knew I was facing an ex-world champion, but thankfully things went my way,” Berchelt said.

Miura, whose purse was $195,000, dropped to 2-2 in his last four bouts with the other defeat coming by ninth-round knockout in the epic 2015 fight of the year against Vargas, who made a huge comeback for the victory.

In an extremely competitive fight with an unsatisfying ending, Jezreel Corrales retained his junior lightweight world title in a 10th-round majority technical decision against Robinson Castellanos, who was deemed unable to continue following a brutal accidental head clash.

“I knew this would be an interesting fight. I am so happy about the victory,” Corrales said. “This is probably the best fight that I’ve had in my career so far. I’m looking at [the winner of] tonight’s main event as one of my future opponents [for a unification bout].”

Corrales (22-1, 8 KOs), a 26-year-old southpaw from Panama making his United States debut, retained his 130-pound belt for the second time in a very tough fight against Castellanos (24-13, 14 KOs), 35, of Mexico, who was aiming for yet another upset.

He had pulled stunners against Ronny Rios and Rocky Juarez and, most recently, scored a huge one when he dominated and knocked out former unified featherweight titleholder Yuriorkis Gamboa on May 5. He came awfully close against Corrales.

The fight was competitive but a bit messy, with grappling, holding and head butts, a product of Corrales’ southpaw style going against the right-handed Castellanos, but it got better as it went along.

An accidental head clash cut Castellanos on his forehead and Corrales over his right eye in the second round. In the third round, Castellanos landed a left hand well below the belt, and Corrales went down to a knee, prompting referee Jerry Cantu to give him time to recover from the foul.

In the final seconds of the seventh round, Corrales dropped Castellanos with a left hand that banged Castellanos’ glove into his face to cause the knockdown.

There was a brutal head butt early in the 10th round that floored Castellanos and badly cut him under the right eye. The ringside doctor examined Castellanos and referee Jerry Cantu stopped the fight at 31 seconds upon advice from the doctor.

“I am honestly so sad,” Castellanos said. “That head butt should have disqualified him; it could have been fatal. I knew coming in that I was in enemy territory. However, I felt that I was ahead on the cards. I feel terrible.”

In the opener, light heavyweight contender Sullivan Barrera shook off a first-round knockdown and dominated Joe Smith Jr. en route to a dominant 10-round decision victory.

The judges scored the fight 97-92, 97-92 and 96-93 as Barrera won his third fight in a row since a one-sided loss to Andre Ward, before Ward beat Sergey Kovalev in November to win three world-title belts, and he looked good doing it.

The victory was especially meaningful to Barrera because it was the first time his father, Rafael Barrera, was able to watch him fight professionally in person. They had been separated for eight years since Sullivan defected from Cuba, but Rafael was able to travel to California thanks to the loosening of travel restrictions in Cuba.

“I feel very happy about this win,” Barrera said. “I respect [Smith] very much. My father [being] here tonight was also amazing. When Smith Jr. knocked me down in the second round, I got back up because that’s who I am.”

He outboxed and outpunched Smith round after round. Barrera, 35, a former Cuban amateur standout fighting out of Miami, hurt him with a right uppercut in the fourth round and was in such control that Smith’s corner was so worried after the seventh round that it pleaded with him to go for a knockout.

After the seventh round, referee Jack Reiss was so concerned about Smith that he called a timeout so the ringside doctor could examine him in the corner. Smith made it to the final bell and always had a puncher’s chance to win but could not find a home for his best shot.

“Sullivan Barrera fought a good fight, and I congratulate him,” Smith said.

Smith, 27, a popular fighter from New York’s Long Island, was returning to the site of his greatest victory in December, when he knocked the great Bernard Hopkins out of the ring in the eighth round and sent the future Hall of Famer into retirement.