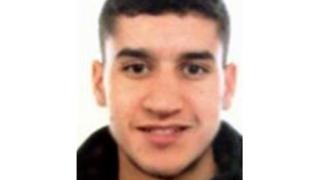 The terror cell behind the attack in Barcelona that left 13 people dead has been dismantled, Spain’s Interior Minister Juan Ignacio Zoido says.

“The cell has been fully dismantled in Barcelona, after examining the people who died, the people who were arrested and carrying out identity checks,” he told a news conference.

But the regional Catalan government said there could be further arrests.

A key suspect linked to the Barcelona attack and a later one is still sought.

Thursday’s attack in the Catalan capital saw a van driven at high speed along Las Ramblas where it smashed into dozens of people walking along the pedestrianised avenue popular with tourists and residents alike.

Spanish police are searching for Moroccan-born Younes Abouyaaqoub, 22, who they suspect may be the driver who escaped the scene on foot.

Only hours later, early on Friday, there was a second van attack in Cambrils, west of Barcelona.

A woman was killed and police shot dead five suspected attackers, including Moussa Oukabir, 17, originally reported as the key suspect in the Barcelona attack.

Oukabir is suspected of using his brother’s documents to rent the van used in Barcelona and another found hours later in the town of Vic, north of Barcelona, that was intended as a getaway vehicle.

The terror cell is reported to comprise 12 men. The Catalan Interior Minster, Joaquim Forn, stressed that the police operation could not be considered over until all those suspected of being part of the cell were in custody.

Police say the suspects had been planning more sophisticated attacks, but an explosion on Wednesday at a house in the town of Alcanar deprived them of bomb material, so they carried out simpler attacks using vehicles.

Police have found the remains of at least three people at the Alcanar house, El Pais newspaper reports.

Abouyaaqoub lived in the town of Ripoll to the north of Barcelona. Three people have been arrested in Ripoll, and one in Alcanar.

In Ripoll the apartment of an imam was raided on Saturday.

Another van, a Renault Kangoo, is also being sought, amid reports it may have been driven across the border into France.

Security is being stepped up, though the security alert level is staying unchanged as there is no information suggesting an imminent attack.

Who are the suspects?

What do we know about the victims?

Five of the dead have been named so far:

A 74-year-old Portuguese woman, a 40-year-old woman with dual Argentine and Spanish citizenship, and a Belgian were also killed, their governments said.

The whereabouts of seven-year-old Julian Cadman, a dual British-Australian national apparently separated from his injured mother during the attack, remains unclear. He was widely reported to be missing.

However, the Catalan police, responding to inquiries, tweeted that they had neither been looking for nor found any missing child. The victims and the injured had all been located, they said.

Catalan emergency services gave a new breakdown of the injured on Saturday:

More on the victims

Pegged on strings between the lamp-posts and plane trees on the packed boulevard, more and more sheets of white paper flap in the breeze.

Imprinted with a red love heart, each contains a message left by a stroller, reflecting on the attack. Messages of love for Barcelona abound but there is anger too. “Now we need to take action,” reads one. “I don’t want to run any more. Let’s not run away from them, let’s run after them.”