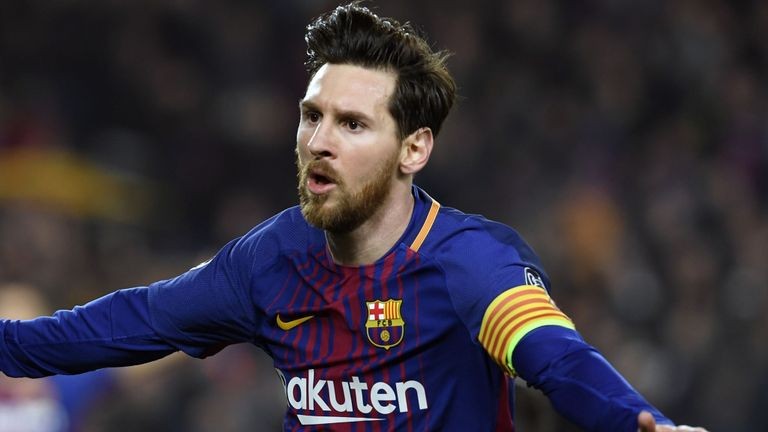 Lionel Messi scored his 100th Champions League goal as Barcelona knocked Chelsea out of the competition with a 3-0 victory (4-1 agg) at the Nou Camp.

Barcelona raced into the lead with Messi beating Thibaut Courtois from a tight angle after just 128 seconds before Ousmane Dembele’s brilliant finish (20) doubled the host’s advantage.

Despite the scoreline, Chelsea had their chances with Marcos Alonso denied by the post just before the break and the Spaniard had a penalty appeal turned down by referee Damir Skomina early in the second half, after going to ground under a challenge from Gerard Pique when clean through on goal.

Missed chances proved to be costly for Chelsea in the end and it was left to Messi to wrap up the tie in the 63rd minute with his landmark goal to book his side’s place in the draw for the last eight, which takes place on Friday at 11am.

Chelsea faced a difficult task before kick-off, following the 1-1 draw in the first leg at Stamford Bridge, but it was made even more difficult in just the third minute when Suarez flicked the ball into the path of Messi. The Argentine made no mistake, sliding the ball through the legs of Courtois to beat him at his near post from a tight angle for the quickest goal of his career.

Man of the match: Lionel Messi

It was the worst possible start for the visitors but they responded well to going a goal behind with Eden Hazard and Willian looking bright in advanced positions, however, they were further behind in the 20th minute.

At one end Samuel Umtiti was needed to make a crucial block to deny Hazard but the ball was soon at the other end as Messi nipped it away from a lunging Cesc Fabregas. Messi, one on one with Christensen, held the ball up before picking out Dembele in space and he took a touch before rifling the ball past Courtois and into the roof of the net.

Once again, Chelsea responded well and they had their moments as the first half drew to a close. Marc-Andre ter Stegen palmed Alonso’s strike away before N’Golo Kante dragged a shot wide of the far post.

Alonso was involved again either side of the break. First, he saw his free-kick clip the outside of the post before being denied a penalty when going to ground when challenge by Pique, after being played in on goal by Willian.

Lionel Messi and Andres Iniesta returned to the Barcelona starting XI in place of Paulinho and the cup-tied Philippe Coutinho. Meanwhile, Antonio Conte also made two changes to the Chelsea side that beat Crystal Palace at the weekend with Victor Moses and Antonio Rudiger coming in for Davide Zappacosta and Gary Cahill.

Chelsea were putting Barca under pressure and the nerves were starting to build among the home fans as Dembele was forced into a last-gasp sliding tackle to deny Alonso, but it was that man Messi, who put the tie to bed.

He showed a great change of pace to burst past Cesar Azpilicueta and into the penalty area before firing through the legs of Courtois for the second time to score his 100th Champions League goal in his 123rd appearance.

Antonio Rudiger hit the bar late on but it wasn’t to be Chelsea’s night as Messi proved to be the difference for Barcelona, who reached the quarter-finals for the 11th consecutive season – the longest run in the history of the Champions League.

Man of the Match – Lionel Messi

Who else could it be? Messi was at his clinical best against Chelsea.

After failing to score in his first 10 Champions League appearances against English teams, Messi has since netted 20 goals in his last 18 games and it took him just two minutes and eight seconds to break the deadlock, sliding the ball through the legs of Courtois.

It was the the fastest goal that he has scored in his club and international career and he wasn’t done there, laying on a perfectly weighted pass to Dembele to double Barca’ advantage.

And finally, when Chelsea were threatening to get a goal back, the Argentine put the full stop on the tie with a trademark strike, his 100th in the competition. 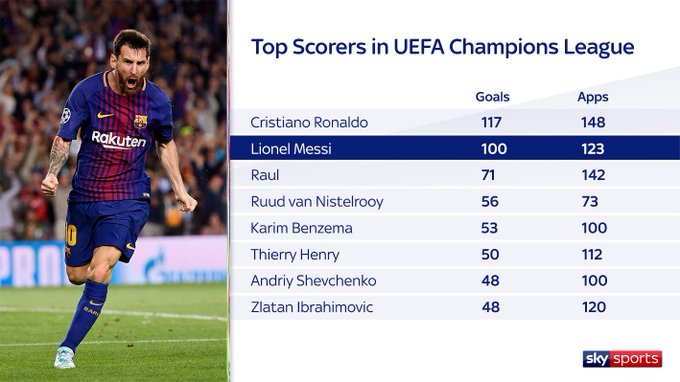 Barcelona are back in action at the Nou Camp on Sunday when they take on Athletic Bilbao in La Liga, live on Sky Sports Football (red button) and Sky Sports Mix from 3.10pm.

Chelsea are also back in action on Sunday when they travel to the King Power Stadium to take on Leicester in the quarter-finals of the FA Cup (4.30pm).