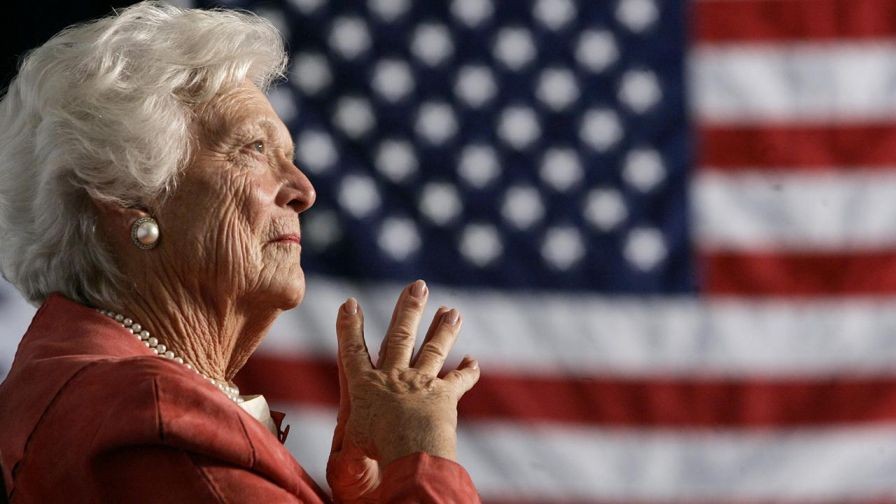 With her cloud of snow-white hair, signature three strand pearls and compelling presence, Barbara Bush’s image was what she laughingly called “everybody’s grandmother.” But the feisty, outspoken Bush was also a tireless advocate for literacy , an author, experienced campaigner and both wife and mother of a U.S. president.

Bush, 92, died Tuesday, shortly after her family announced she was in failing health and would decline further medical treatment in favor of “comfort care.” There were no details of her specific health problems.

The announcement was made in a statement from the office of former President George H.W. Bush.

“A former First Lady of the United States of America and relentless proponent of family literacy, Barbara Pierce Bush passed away Tuesday, April 17, 2018 at the age of 92. She is survived by her husband of 73 years, President George H. W. Bush; five children and their spouses; 17 grandchildren; seven great grandchildren; and her brother, Scott Pierce. She was preceded in death by her second child, Pauline Robinson ‘Robin’ Bush, and her siblings Martha Rafferty and James R. Pierce.”

Bush was “broken-hearted” over the loss of his “beloved Barbara” and was said to have held her hand all day. He was “at her side” when she passed away, his chief of staff said.

In a statement, her son, former President George W. Bush, called his mother “a fabulous First Lady and a woman unlike any other.”

He also said, “My dear mother has passed on at age 92. Laura, Barbara, Jenna, and I are sad, but our souls are settled because we know hers was. Barbara Bush was a fabulous First Lady and a woman unlike any other who brought levity, love, and literacy to millions. To us, she was so much more. Mom kept us on our toes and kept us laughing until the end. I’m a lucky man that Barbara Bush was my mother. Our family will miss her dearly, and we thank you all for your prayers and good wishes.”

.@FLOTUS Melania and I join the Nation in celebrating the life of Barbara Bush: pic.twitter.com/4NzyjxqAFM

Shortly after news of her passing came out, President Donald Trump shared his “thoughts and prayers” with the Bush family.

Barbara Bush was survived by her husband of 73 years, former President George H.W. Bush, five children (a sixth died as a toddler), 17 grandchildren and seven great-grandchildren.

Her granddaughter, Jenna Bush Hager, told NBC News on Monday that she and her twin, Barbara, named after her grandmother, had spoken with the family matriarch Sunday night and “she’s in great spirits, and she’s a fighter and she’s an enforcer.”

A source close to the family told CBS News that the former first lady was having a glass of bourbon the night before her passing.

Barbara Bush was born June 8, 1925, in New York City, the third of four children of Marvin Pierce, a magazine publishing executive, and Pauline Robinson Pierce. She grew up in the affluent suburb of Rye, New York, where she was an avid athlete, excelling at swimming and tennis.

As a teen, she attended Ashley Hall, a boarding school in South Carolina. In 1941, when she was 16 and home on Christmas break, she met George Herbert Walker Bush, then a student at Phillips Academy in Andover, Mass., at a holiday dance. The attraction was immediate and 18 months later, they were engaged.

Barbara entered Smith College but dropped out to marry Bush, who had gone to war as a Navy torpedo bomber pilot. She was 19 and he was 20 when they wed January 6, 1945 in Rye. Years later, she said, “I married the first man I ever kissed. When I tell my children that, they just about throw up. ” As newlyweds, the couple lived in New Haven, Conn., where Bush was a student at Yale and their first child, George W. Bush, was born. They then moved around regularly – to Texas, California, and back to various Texas cities – as the family grew. By the time she moved to Washington for her husband’s vice presidency, Barbara Bush estimated they had moved 29 times.

George W. Bush was followed by a sister, Robin, who lived almost four years before dying of leukemia (an event some speculated was the cause of Barbara Bush’s hair turning prematurely white). The children who followed were Jeb, Neil, Marvin and Dorothy.

While George – who called his wife “Bar” – built a business in the oil industry, Barbara devoted herself to raising their family. When he entered public life – as a congressman, U.S. Ambassador to the UN, Chairman of the Republican National Committee, Chief of the U.S. Liaison Office in the People’s Republic of China, Director of the Central Intelligence Agency and later as Vice President, she was at his side.

As the vice president’s wife, she selected literacy as her special cause. Later, after her husband was elected president, she founded the Barbara Bush Foundation for Family Literacy. She also was an advocate for volunteerism, including programs involving the homeless, elderly and those with AIDS.

Along the way, she wrote two books about the family dogs, “C. Fred’s Story” and the best-selling “Millie’s Book,” with profits benefitting literacy. After her husband left the White House, she wrote a best-selling autobiography “Barbara Bush: A Memoir” in 1994 followed by “Reflections” in 2004.

Bush once explained that people liked her because “I’m fair and I like children and I adore my husband.” She also was known for her forthright manner, especially when anyone challenged her family. In 1984, speaking of her husband’s vice presidential opponent, Geraldine Ferraro, Bush said she couldn’t say what she thought of the Democrat on television but “it rhymes with rich.”

Following her husband’s loss in the 1992 presidential election, the couple moved to Houston and also spent time at the longtime family home in Kennebunkport, Maine.

Bush was active in campaigning for her sons Jeb, who served as governor of Florida, and George, who was a two-term U.S. president. Only Barbara Bush and Abigail Adams were both the wife and mother of U.S. presidents.

In 2008, Bush underwent surgery for a perforated ulcer and in 2009, she had heart surgery.  In 2014, she was hospitalized with respiratory issues.