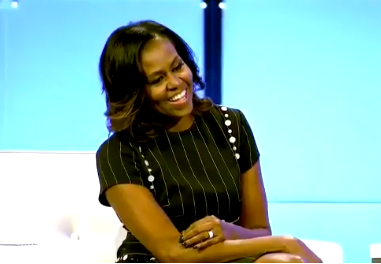 For years, Barack and Michelle Obama have been giving us marriage goals and they did it again during their anniversary.

The former US president surprised his wife in a sweet way as they marked their 25th wedding anniversary on Tuesday. While Michelle was in the middle of a talk with television producer Shonda Rhimes at the Pennsylvania Conference for Women in Philadelphia, Barack crashed the talk with a surprise video.

Barack appeared on screen at the conference near the end of a 57-minute talk by Michelle.  He apologized to the attendees for having to “crash this party,” before letting his wife know what she means to him.

Obama began: “Pardon me Shonda Rhymes but I have to crash this party because today, we have been married for twenty-five years. ” 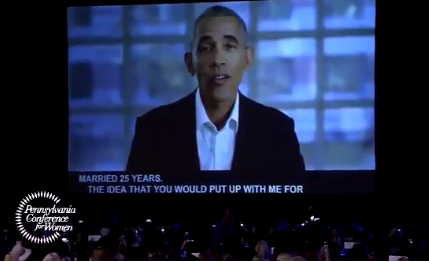 At this, the crowd cheered and Michelle blushed while Barack continued: “Now, the idea that you would even put up with me for a quarter of a century is a remarkable testament to what a saintly, wonderful, patient person you are. It was a lot easier for me to do it because the fact of the matter is that not only have you been an extraordinary partner, not only have you been a great friend, somebody who could always make me laugh, somebody who would always make sure that I was following what I thought was right, but you have also been an example to our daughters and to the entire country.”

He added: “Your strength, your grace, your determination, your honesty, the fact that you look so good doing all this, the way in which you’ve always taken responsibility for your own actions but also for looking out for the people around you is remarkable. And it’s no wonder that as people got to know you the way that I got to know you, they fell in love. And It is truly the best decision that I ever made to be persistent enough, asking you out on a date, that you finally gave in. And I hope you feel the same way. So, I don’t want to interrupt the flow of what I’m sure is a fascinating discussion, but I figured that you wouldn’t mind maybe me parachuting in just to say how much I love you and how much I appreciate you.” 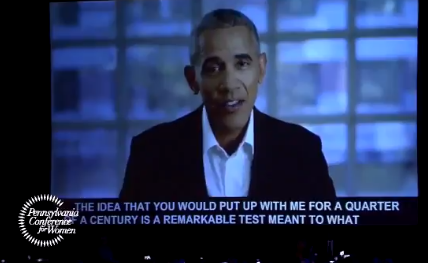 Michelle smiled and blushed after listening to the message and she said: “I better get home!”

His surprise video came after Michelle had posted a photo from their 1992 wedding on Instagram with a sweet message for Obama on their anniversary.

Michelle’s message reads: “Happy 25th anniversary @barackobama. A quarter of a century later, you’re still my best friend & the most extraordinary man I know. I ? you.” 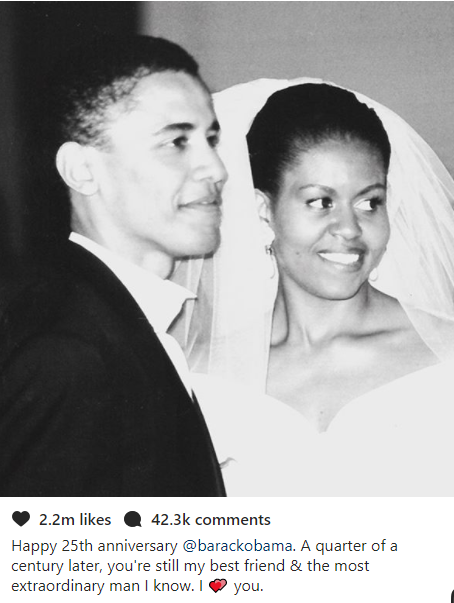 Watch the heartwarming video below.