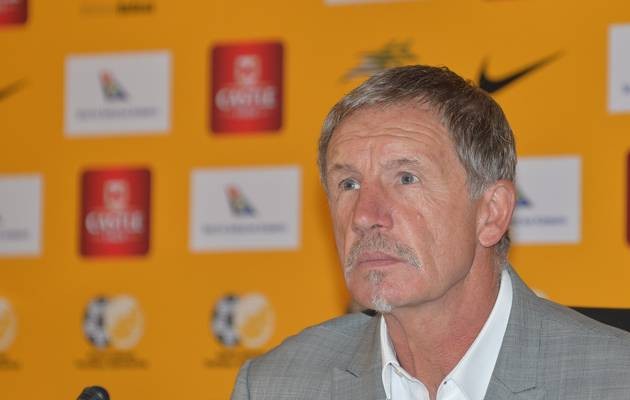 South Africa coach Stuart Baxer is desperate  to hit the ground running  in his first match in charge of Bafana Bafana who travel to Nigeria for their 2019 Africa Cup of Nations qualifier in Uyo on June 10.

The 1996 African champions have never tasted victory in their 11  competitive matches against the Super Eagles.

Three-time African champions  Nigeria beat the South Africans  seven times, with both sides settling for draws on four occasions.  Bafana’s only defeated  the Eagles  2-1  in a friendly affair in the 2004   Nelson Mandela Challenge Cup in  Johannesburg.

Baxter, who was re-appointed after an earlier stint with the Southern African superpower  for one year  (2004 to 2005), is looking to break Bafana’s  hoodoo against Nigeria.

Reports on Monday say the Englishman is leaving nothing to chance ahead of the Uyo clash as he has decided to muster up all the resources to claim all points.

After  sending Bafana team manager Barney Kujane to scout facilities  at the Uyo Stadium on May 15, Baxter, 63, has reportedly deployed   some of his assistants in Paris to monitor the Eagles, who are camped in the French capital ahead of the qualifier. The Eagles take on Togo in a friendly affair in Paris on Thursday.

The former Finland confirmed he had hired the services of a Manchester United scout for intelligence on the Eagles.

“I’ve got a Manchester United scout who’s helping us in Paris. I’ll get reports on their two games with Corsica and Togo. I’ve got video footage. I’ve got reports. I’ve got the Nigerian coach’s (Gernot Rohr) background. So by the time we come to the event (on 10 June), we’ll be quite well prepared.”