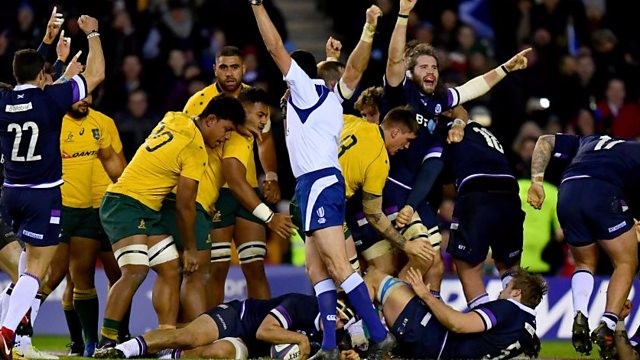 Scotland ended their autumn internationals series with a record thumping of 14-man Australia.

The Scots ran in eight tries, all but one coming after Wallabies prop Sekope Kepu was dismissed for a shoulder charge to the head of Hamish Watson.

Byron McGuigan, a late replacement for Stuart Hogg – injured in the warm-up – scored two on his first Test start.

Hulking centre Tevita Kuridrani scored a first-half brace for Australia, with Kurtley Beale and then replacement Lopeti Timani touching down after the interval.

The points tally and margin of victory are both records for Scotland in this fixture, surpassing the previous benchmarks of 34 and nine respectively.

Intrigue is guaranteed whenever these two nations meet, each recent Test going to the wire, lifting the spirits but weakening the heart at the same time.

With this one, the drama began even before a ball had been kicked, Hogg, the man the Wallabies would have feared the most, injuring a hip in the warm-up.

It looked like a colossal blow for the Scots who moved Maitland to full-back, brought McGuigan in on the wing for his first start and parachuted Ruaridh Jackson onto the bench. What happened over the course of the next 80 minutes took this rivalry to a new level.

Scotland began clumsily, with a host of attacking errors, but took the lead when Russell put over a penalty then McGuigan struck for the opening try.

When the ball went loose off Bernard Foley, McGuigan jumped all over it. He put his boot to it once, then twice, then three times. Nobody could have mistaken McGuigan for Lionel Messi in those frenetic seconds, but he had enough control to get the job done. Try. Conversion. Scotland ahead by 10.

Before the points deluge, there were troubling moments for the hosts. Self-inflicted wounds let Australia back into it, Russell’s missed touch leading, soon after, to Foley chipping through for Kuridrani to get his first.

A Tommy Seymour spillage out wide gifted them another, Foley gathering, chipping ahead and then popping his pass to the Fijian to score again.

That put the Wallabies into the lead at 12-10, but the seismic moment of the match was about to play out.

At a breakdown just before the interval, Kepu went shoulder-first into Hamish Watson’s head. Watson had been a spectacular nuisance to the visitors but attempting to remove his head was pretty unwise.

Referee Pascal Gauzere was decisive and correct. Kepu was sent off. The question then was what could Scotland do with the one-man advantage. The answer was quick and emphatic.

They put their penalty to touch and drove it close enough for Price to reach out to score. Russell’s conversion made it a five-point game in Scotland’s favour.

There was one last act of defiance from Australia when, on the 20th phase, Beale went over to level it at 17-17, but from there, Scotland kicked on.

The Wallabies lost the ball on halfway and Maitland ran all the way, much to his relief. He was being chased not by the flying machines in the Australia defence, but by three forwards who never looked like they were getting there.

Zander Fagerson and Jamie Bhatti appeared off the bench and their broken field running was devastating. A Bhatti carry took Scotland into Australia’s 22 and from there, Gray got outside Will Genia to score.

A third try in a ruthless 10-minute burst arrived and again a Bhatti carry was important in its creation, Russell’s tapped penalty was key and Jones’ stepping of Samu Kerevi finished the job.

Jones has a sensational try-scoring record. That was his seventh in his 11 Tests. He’s been a wondrous addition to the Scotland midfield.

McGuigan was pretty special as well. Scotland had their foot on Wallaby throats and more pressure brought another score, the forward pack creating the space and Maitland putting the wing over.

Australia were on their knees, no doubt cursing the madness of their prop. Timani’s try made the score a little, but not a lot, more palatable, but Barclay wiped it out soon enough.

The sixth Scotland try came when the captain got ruck ball close to the Wallaby line. Karmichael Hunt, Lukhan Tui and Kuridrani all went to hit him, but he blasted his way through the three of them.

Russell landed the conversion to make it a historic high of 46-24. Freakish stuff, but it got even more bizarre as Australia grew ever more weary at the end of a long season.

Beale was sin-binned a minute before time for deliberating knocking the ball out play. Scotland put the penalty to touch, fired up their maul which carried them inexorably across the line.

McInally grounded the ball, Russell landed the conversion and Scotland were over the half-century.

Kepu would have been in a darkened room by then. He might have been joined by the faithful of Murrayfield. This was unforgettable stuff, a day to rubber-stamp Scotland’s credentials as a fast-emerging force in European and world rugby.