Athletics vs Astros: Beaten up ‘Stros Head to Oakland 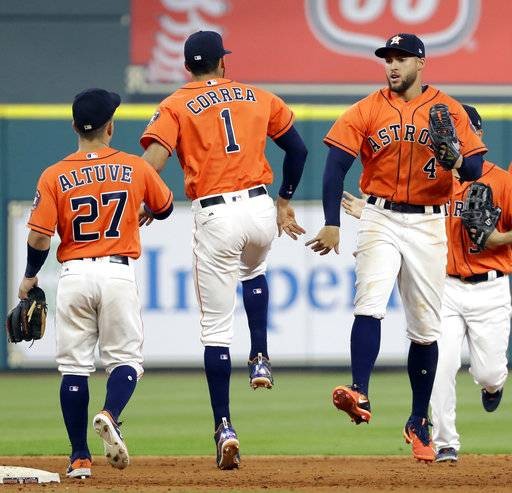 Now the test truly begins, and it could not be coming at a better time. After completing a four game sweep of the New York Yankees, causing the season long kings of the AL East to topple into a tie for the division lead with the Boston Red Sox, the A’s remain at home for four more games to face the AL West leading, and MLB-best, Houston Astros.

Don’t look now, but with the sweep of New York, the A’s are less than five games out of a Wild Card spot with more than half the season to make up the difference. And the team is just getting better as it gets younger and, finally, more athletic. And they probably (hopefully) won’t have the worst road record in all of baseball for the entire season. All of this bodes well for a team that has been expecting to compete again in 2018, but it also creates a conundrum for what the A’s ought to do at the trade deadline surrounding their biggest, most talked about trade chips like Yonder Alonso and Sonny Gray. If the A’s could sneak into the playoffs in the wild card spot, anything could happen, and keeping the team’s best pitcher and hitter as team leaders during the playoff chase and potentially beyond in the next couple of seasons would be a boon for Oakland, but using the two stars to patch up glaring holes on the roster and in the minor league system could be equally as valuable and important for the team.

Meanwhile, not only are the A’s playing at home, and therefore poised to play well with a 22-13 record (the A’s are tied for the second-most wins in the American League at home, trailing Houston and Baltimore with 23 wins each), but the Astros are in the middle of a skid of mediocrity, as the team is just a mere 8-8 on the month of June after two months of winning nearly 70% of their games played. The reason for this skid of mediocrity isn’t really a mystery to anyone, as four regular starters in the Astros’ rotation, ace Dallas Keuchel, budding ace Lance McCullers Jr, Charlie Morton, and Collin McHugh have all gone down with injuries and are currently rehabbing, forcing the Astros to dip into their tapped minor league system for pitching help.

Every team in baseball does not have enough starting pitching, as the Astros suddenly weak starting rotation, one that has obviously been key in helping the Astros surrender the fewest runs in all of baseball, has proven. Therefore, it makes the team’s interest in making a sizeable trade for the A’s own Sonny Gray understandable. Whether or not the Astros have the talent in the minors to acquire Gray in a trade, or whether or not the A’s would trade a player like Sonny, who has meant so much to the fans and team over the last few years, to a division rival has yet to be seen. Having a pitcher of Sonny Gray’s experience and talent in the post season could very well be Houston’s ticket to the World Series, should the trade happen.

The Astros currently have three players who are likely to be starting in this year’s All Star Game, and none of the names would surprise anyone. Jose Altuve has a commanding lead of second baseman, while Carlos Correa and George Springer should wind up with spots as well. Each player has an OPS over .900 with average-to-strong defense in up the middle defense. However, it is still Marwin Gonzalez acting as the biggest surprise of the season, as he has rebounded from years of being bad to suddenly OPS-ing nearly 1.000.

On the other side of the spectrum, veterans Nori Aoki and Carlos Beltran haven’t found their strokes yet this season and haven’t contributed much on either side of the baseball, and top prospect Alex Bregman has yet to meet expectations in his first year in the majors. All players, Bregman especially, have the talent to turn their seasons around and contribute positively for their team, but it will be tough for them to do so in the cavernous confines of Rickey Henderson Field.

All games are on NBCSCA and MLB.tv.

The A’s hit well at home, pitch well at home, and have slowly but surely been improving their defense in the field via the callups and consistent playing time of Matt Chapman, Jaycob Brugman, and Chad Pinder (in the OF, specifically). While the talent on the roster seemingly withers up and dies whenever the team embarks on a road trip, the A’s have played up to expectations at home all year long, and resemble the team expected to be in the playoff hunt a year from now.

While the Astros are equally as good on the road as the A’s are at home, with an astonishing 23-8 record away from Houston, as was mentioned before, four-fifths of the Astros starting rotation is on the DL for this series. The rookies and Brad Peacocks pitching in lieu of the injured starters have actually performed quite well in their stead, but after going a few turns through this patchworked rotation may start to get figured out by the opposition. The A’s starters also just so happen to match up well against Houston’s for this series, as the A’s hottest starters will be opposing the Astros’ hottest starters, and Daniel Gossett is getting matched up against another fellow fringe starter.