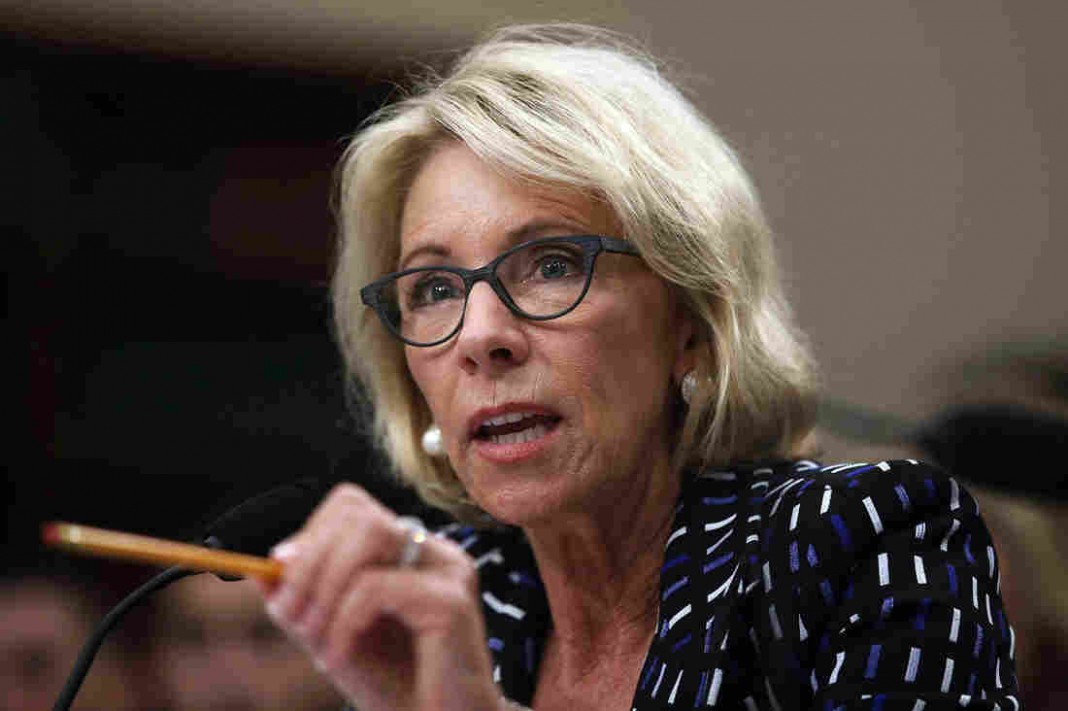 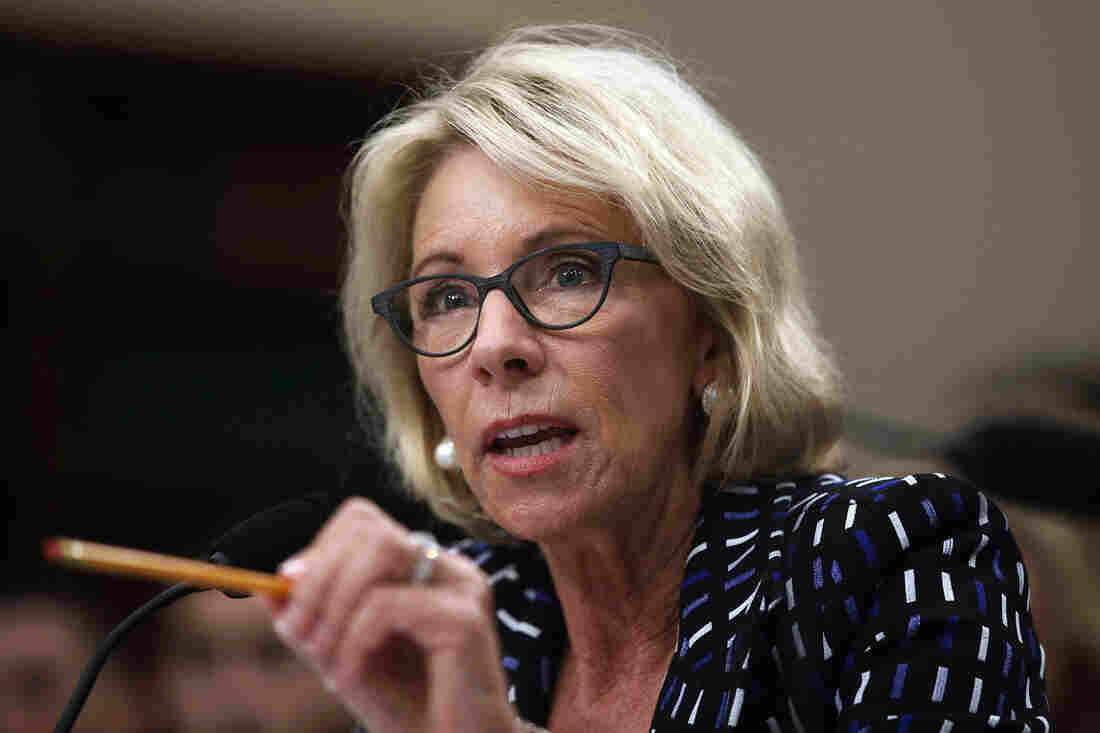 Over and over again, Education Secretary Betsy DeVos deflected a barrage of pointed questions with one answer:

Appearing Tuesday before a Senate Appropriations subcommittee, DeVos was asked repeatedly by lawmakers if, under a federal voucher program, she would prohibit private schools from discriminating against LGBTQ students and children with disabilities. Recent reports, including an NPR investigation of Indiana’s voucher program, have documented private schools excluding these students.

When Democratic Senator Patty Murray of Washington asked if private schools would be required to follow IDEA, the federal Individuals With Disabilities Education Act, DeVos began the pattern:

When Murray followed up, she got the same answer, again.

Later, Sen. Jeff Merkley, an Oregon Democrat, pointed out that federal anti-discrimination laws are “somewhat foggy” and asked DeVos if private schools that take federal dollars should be allowed to turn away LGBTQ students.

“Senator, I said it before and I’ll say it again, that schools that receive federal funds must follow federal law,” DeVos replied.

Later in the hearing, when Democrat Jack Reed of Rhode Island picked up the anti-discrimination thread, DeVos repeated the answer eight more times. At one point Reed, exasperated, asked: “But what does that mean?”

“The current state of federal protections for LGBTQ students is ambiguous,” says Nathan Smith, director of public policy at GLSEN, a group that champions LGBTQ issues in K-12 education.

That ambiguity stems from this sentence in the law known as Title IX of the Education Amendments of 1972:

“No person in the United States shall, on the basis of sex, be excluded from participation in, be denied the benefits of, or be subjected to discrimination under any education program or activity receiving Federal financial assistance.”

A debate has raged through U.S. courts around whether “sex” includes sexual orientation and gender identity.

“The majority view of the courts right now is that transgender students are protected from discrimination by Title IX,” says Seth Galanter, a former senior official in the Education Department’s Office for Civil Rights under President Obama. “The courts are more divided about whether LGB students are protected by federal law from discrimination. But there is a trend in the lower courts that they will be protected.”

In February, the Trump administration rescinded that guidance (a move the DeVos reportedly opposed.)

Further complicating matters, Title IX includes an exemption for private schools that are run by religious organizations, as is the case with many current voucher-accepting private schools.

So, when it comes to a hypothetical federal voucher system, says Galanter, that “makes the question about whether Title IX prohibits discrimination against transgender kids or LGB kids kind of irrelevant.”

In short, when Secretary DeVos says, “Any institution receiving federal funding is required to follow federal law,” it’s important to know that that law offers limited protections for LGBTQ students and an exemption for many schools.

When it comes to protecting students with disabilities from discrimination, schools take their cues from three separate federal laws: the Americans With Disabilities Act (ADA), Section 504 of the Rehabilitation Act of 1973, and the Individuals With Disabilities Education Act (IDEA). But civil rights experts say that, in a hypothetical federal voucher system, none would offer strong guardrails.

First, the ADA. Like Title IX, it includes an exemption for private, religious schools and thus limited protection in a voucher system.

Section 504 does not offer religious schools an exemption and would likely provide students with disabilities some protections from discrimination in a federal voucher program. But, says Galanter, “It generally is a low bar.” That’s because the law only requires that private schools that receive federal funds make “minor adjustments” to accommodate students with disabilities.

“Those schools must provide reasonable accommodations” for students with disabilities, says Julie Mead, a professor in the Department of Educational Leadership & Policy Analysis at the University of Wisconsin-Madison. “But they do not have to alter their existing programs or add anything to them. What that means is, if their existing program does not provide any special education or related services, then they don’t have to provide any.”

As for IDEA, the federal law that Sen. Murray invoked at the start of Tuesday’s hearing, students with disabilities enjoy few if any protections once their parents voluntarily enroll them in a private school. If a student is placed in a private school by a public school that cannot serve her needs, then the child is still guaranteed a Free Appropriate Public Education (FAPE). But that protection requires that parents work through the public school system.

What’s not clear is how the Education Department would prevent discrimination in a federal voucher program, given the current limitations of federal law.