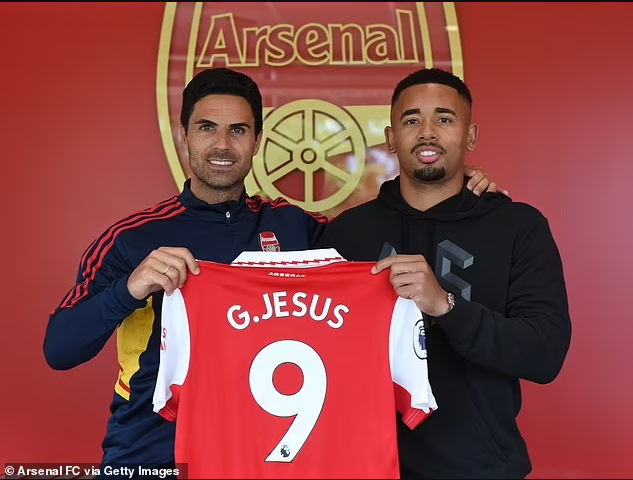 Arsenal has confirmed the £45million signing of Manchester City forward Gabriel Jesus, with the Brazilian agreeing on a five-year contract at the Emirates.

The Gunners announced the move on Monday morning, July 4, with a video welcoming the Brazil international to north London.

Also read New Trailer! Everything To Know About ‘HSMTMTS’ Season 3

The striker, 25, is Mikel Arteta’s fourth signing of the summer after landing Fabio Vieira, Marquinhos, and Matt Turner.

Jesus, who has taken the No 9 shirt, had interest from both Chelsea and Tottenham but opted to join Arsenal to become their striker after Alexandre Lacazette left on a free transfer to return to Lyon.

Los rad: ‘The Winchesters’ Stars Call Bringing John And Mary To Life ‘An Honor’ Winchesters Are Back! What To Know About The ‘Supernatural’ Spinoff

Speaking on his move, Jesus told the club’s official website: ‘I followed Arsenal when I was young because of [Thierry] Henry. Obviously, I didn’t follow too many European teams but when I saw some of the players that played here, I was like “wow, this club is big”.

‘When I played against Arsenal I was looking at the Emirates and it was a very good stadium, so I’m very excited to play here.

Also read: New Trailer! Everything To Know About ‘HSMTMTS’ Season 3

‘I’m so happy to sign for this big club. From day one when I knew I could come to play for Arsenal, I was happy. I know the staff, I know some players, the Brazilian ones.

‘I know there are a lot of top players. They are young and I’m still young as well, so I am so happy to be here to help. I come to help, to learn as well and to try to do my best.’

Jesus will link up with Eddie Nketiah – who has just signed a new long term contract and taken the No 14 shirt , and fellow Brazilian Gabriel Martinelli.

The move also reunites him with Arteta, who worked with him while he was assistant manager to Pep Guardiola at Man City.

Speaking on his relationship with his new head coach, the Brazilian added: ‘We spoke a couple of times about the club, the players, the project and the future. I believe 100 per cent in Mikel. I had a very good time with him before, he’s a very good guy and a very good coach as well.

‘He helped me a lot [at Manchester City]. We would always stick together after the training sessions and do some finishing or something. He’s a very intelligent guy and was an amazing player, so if he knows something he can teach me or the young players.’

Arteta himself commented on the move, telling the club’s reporter: ‘I’m very excited. The club has done a tremendous job to recruit a player of this stature. I know Gabriel personally very well, and we all know him well from his time in the Premier League and being really successful here.

‘This is a position that’s been on our radar for a long time now and we have managed to get a player that we all wanted, so I’m really happy.’

Jesus netted 95 goals in total from 236 appearances during his six seasons at City, though he was never able to become a clear-cut favourite under Guardiola.