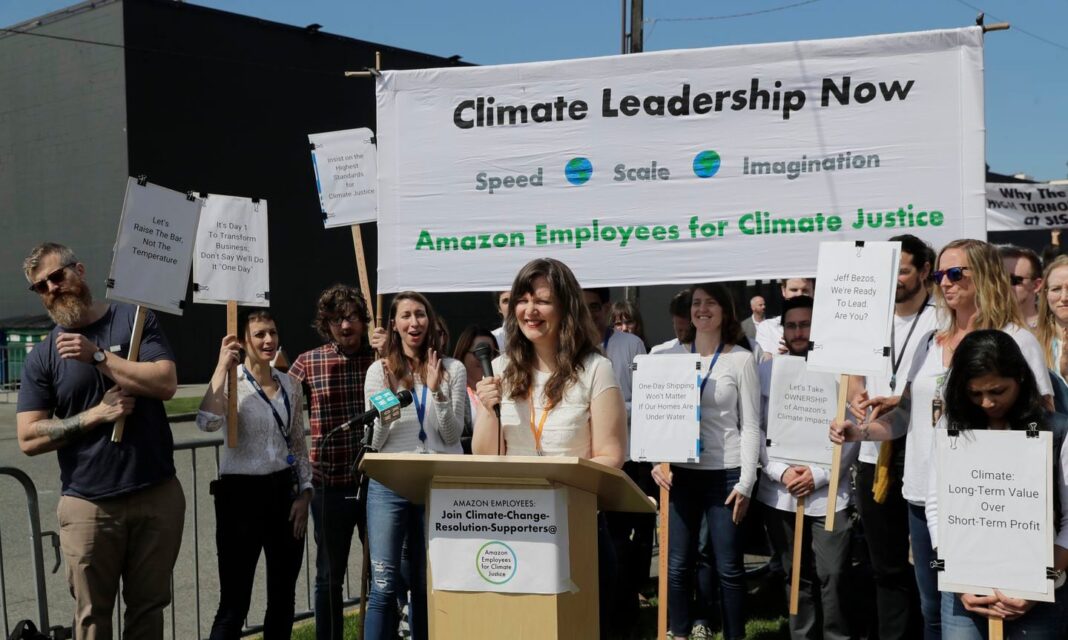 Amazon threatens to terminate critics who are outspoken on its environmental policies. The lawyer in the human resources group, Eric Sjoding, advised Costa in the Nov. 22 email to “review the policy again and in the future anytime you may consider speaking about Amazon’s business in a public forum.”

Costa and Jamie Kowalski, an Amazon software development engineer, told The Post in a joint statement in October that the company is contributing to climate change as its cloud computing business aids oil- and gas-company exploration. Costa also met with Amazon’s human resources department to discuss the matter in October.

“It was scary to be called into a meeting like that, and then to be given a follow-up email saying that if I continued to speak up, I could be fired,” Costa said via email, referring to Amazon’s warnings to her. “But I spoke up because I’m terrified by the harm the climate crisis is already causing, and I fear for my children’s future.”

Costa said she will not be silenced.

“It’s our moral responsibility to speak up — regardless of Amazon’s attempt to censor us — especially when climate poses such an unprecedented threat to humanity,” Costa wrote.

Kowalski acknowledged receiving a similar letter from Sjoding but declined to comment on it. A third worker, Emily Cunningham, said that she was informed in a separate meeting that she had violated the company’s policies after speaking out on social media and to news organizations about Amazon’s climate impact.

Amazon’s external communications policy “is not new and we believe is similar to other large companies,” company spokeswoman Jaci Anderson said in a statement. In response to whether Amazon was trying to stifle workers, Anderson said employees are “encouraged to work within their teams,” including by “suggesting improvements to how we operate through those internal channels.”

Tech workers have recently become more outspoken about concerns over their employers’ policies. During a Sept. 20 protest, thousands of Amazon employees walked out and criticized the company’s climate policies and practices. In November 2018, thousands of Google employees walked off the job to protest of the company’s handling of sexual harassment claims. Workers at Google, Amazon and Microsoft have spoken out in criticism of facial-recognition technology from their companies, fearing misuse by law enforcement and other government agencies.

As a result, some of those companies are attempting to crack down. Some Google employees have alleged they were recently fired in retaliation for their public criticism of the company’s policies and their attempts to organize. Google said the firings were a result of violations of its policies around accessing and sharing internal documents and calendars and has denied they were retaliatory.

On Sept. 5, a day after an employee climate group emailed colleagues about the Sept. 20 walkout, Amazon updated its communications policy to create “a more streamlined and user-friendly way to request PR approval to participate in external activities,” according to a notification on the company’s internal website viewed by The Post. The policy requires a “business justification” for any communications and notes that approval could take up to two weeks.

The earlier version of the policy, which had not been routinely enforced with activist employees, required workers to request approval via email from senior vice presidents to comment publicly. The update requires permission from lower-level executives and can be sought via an intranet page, a change Amazon’s Anderson said makes its easier for employees to give speeches and grant media interviews.

“As with any company policy, employees may receive a notification from our HR team if we learn of an instance where a policy is not being followed,” Anderson said.

The day before the walkout, Bezos held a news conference agreeing to measure and report Amazon’s emissions on a regular basis and meet the goals of the Paris climate agreement 10 years early. Critics said at the time that the commitments lack accountability and transparency.

Three weeks after, Amazon released a new policy statement outlining its positions on a variety of hot-button issues for which it has faced criticism, including an acknowledgment that it would continue to work with the energy industry.

“While our positions are carefully considered and deeply held, there is much room for healthy debate and differing opinions,” the company wrote at the time.

All three employees are members of Amazon Employees for Climate Justice, a group that has called on the company to commit to being carbon neutral by 2030, to end cloud computing contracts that help energy companies accelerate oil and gas extraction, and to stop funding politicians and lobbyists who deny climate change.

Amazon also has a social media policy that allows workers to post missives as long as they do not disclose confidential business information. Workers also are supposed to note that they are expressing their own opinions, not the company’s. Anderson said that policy is part of its overall communications rules, not separate from them.

Me on the BBC. Thousands of us walked out, not hundreds :).

“If Amazon truly wants to be a climate leader, we absolutely can not be in bed with fossil fuel companies. Currently we’re selling our AI to Big Oil and Gas to help them extract oil more quickly.”#ClimateStrike pic.twitter.com/oGRbZPVIED

Cunningham, a user-experience designer, said she was informed in an October meeting with a human resources executive that she had violated the company’s recently updated policy. Cunningham criticized Amazon’s environmental policy at the company’s shareholder meeting in May, and on social media and in news reports she has condemned Amazon’s work with oil and gas companies.

In an email, Cunningham wrote that the human resources meeting was frightening, adding that it also made her sad and angry, given the threat of climate change.

“It was a clear attempt to silence me and other workers who have been speaking out about the climate crisis,” Cunningham said.

Costa wrote that she understands that she cannot discuss confidential business information but that she believes she has an obligation to speak out about the causes of climate change and how to address them. Amazon’s efforts to silence employees’ criticism of its practices are damaging morale, she said.

“I’ve had colleagues, many of them very senior and tenured, say how disappointed they are — that this isn’t the company they thought they were working for,” Costa wrote. What is the criminal punishment principle?