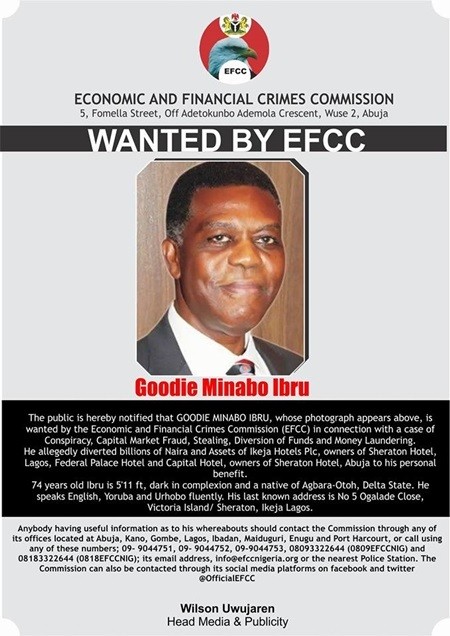 The Abuja Division of the Court of Appeal has cleared the Economic and Financial Crimes Commission to continue its investigation and possibly prosecute Capital Oil and Gas Limited and its Managing Director, Mr. Ifeanyi Ubah, for their alleged complicity in a N43.29bn fraud perpetrated through the petroleum subsidy scheme.

The EFCC and the police had levelled against Ubah and his company allegations of obtaining subsidy payments by false pretences, stealing, money laundering and forgery with respect to the alleged fraudulent payment of N43.29bn in the transactions conducted in 2011.

A unanimous judgment of a three-man bench of the Court of Appeal headed by Justice Tinuade Akomolafe-Wilson clearing Ubah for probe and trial was delivered on May 12, 2017 but  its copy was obtained by our correspondent on Sunday.

The lead judgment of the appeal court was prepared by Justice Emmanuel Agim, and was consented to by Justice Akomolafe-Wilson as well as the other member of the appeal panel, Justice Tani Yusufu.

The verdict came as Ubah was waiting in the detention of the Department of State Services for the outcome of an ongoing investigation into a separate case of alleged diversion of N11bn worth of Federal Government’s Premium Motor Spirit (petrol).

Justice Agim, in the lead judgment, nullified the July 25, 2013 verdict of Justice Abdukadir Abdu-Kafarati of the Federal High Court in Abuja, who had made an order of perpetual injunction restraining the EFCC, the Inspector-General of Police and the AGF, from prosecuting Ubah with respect to the subsidy fraud allegations.

The Federal High Court had, apart from granting a perpetual restraining order against the law enforcement bodies, also awarded N10m as damages against the three of them for “the injury suffered” by Ubah and his company “as a result of the unlawful acts of the respondents including the breach of the first applicant’s fundamental right to liberty.”

Justice Agim, in the lead judgment of the appeal court, nullified all of Justice Abdul-Kafarati’s orders, including the one quashing the November 3, 2012 interim investigation report of Aigboje Aig-Imoukhuede-led Presidential Committee on Verification and Reconciliation of Subsidy Payments to Petroleum Marketers.

He held that by virtue of the Aig-Imoukhuede committee’s report, and the first two reports made by the Commissioner of Police in charge of Special Fraud Unit ‘D’ Department of the Force Criminal Investigation Department, Mr. Tunde Ogunsakin “there was a reasonable basis for the suspicion of the first and second respondents (Ubah and Capital Oil) of committing the said offences.”

Agreeing with the appellants’ lawyer, Mr. Rotimi Jacobs (SAN), the Court of Appeal held that, the EFCC “can competently reopen and continue investigation into the matter,” after the police, through Ogunsakin, had issued a third report of investigation clearing Ubah and Capital Oil contrary to the findings of the first two reports by the same police officer indicting the businessman and his company.

He noted that the scam involved many oil companies and officials of government’s regulatory agencies, “resulting in the looting and stealing of trillions of naira from the Federal Government of Nigeria and threatening the security and economy of Nigeria.”

He held that despite this, Justice Abdu-Kafarati of the Federal High Court in Abuja had granted Ubah’s application for fundamental human rights “in such a manner as to prevent or frustrate investigations into the scam.”

He held that the trial court issued injunctions in Ubah’s case to stop ongoing process and prevent even future process “without regard to the very serious nature of the crime alleged” and its “far-reaching destructive effect on the society.”

In upholding a joint appeal by the EFCC and the Attorney General of the Federation against the Federal High Court’s judgment, Justice Agim held that the enforcement of a person’s rights must not be used or allowed to shield the person from “the due process of criminal law”.

He held that the legal system had provided remedy for a suspect in the civil suit for relief from malicious process “if after the investigation with or without arrest and detention” or “after the trial the evidence does not establish the guilt of the suspect.”

He ruled, “Such determination must involve a consideration of a whole range of issues to ensure that the enforcement of a person’s fundamental or other rights is not used or allowed to prevent or frustrate the initiation or continuation of the due process of criminal law against him by the competent law enforcement authorities or is not used to shield the person from the due process of criminal law or is not used to prevent or frustrate the competent law enforcement agency from exercising its constitutional or statutory powers of crime prevention, control, investigation and prosecution o is not used to defeat the legitimate public expectation of law enforcement or is used to acquire toga of defacto impunity for himself.”

Justice Agim also held that the judgment of the Lagos Division of the Federal High Court delivered on February 18, 2013 in favour of Ubah and his company had since 2015 been set aside by the Court of Appeal, Lagos, in 2015.

He also rejected the documents which all cleared Ubah and relied on by Ubah’s lawyers, Mr. Raphael Oluyede and Babs Akinwumi in the course of the appeal.

He held that the documents, including the legal opinion offered by the then Attorney-General of the Federation, Mr. Mohammed Adoke, in 2014 and a letter anchored on Adoke’s legal advice and sent by the then Chairman of the EFCC, Mr. Ibrahim Lamorde, to the Federal Ministry of Finance, were nothing but opinions which could not stop further investigation when the need arose.

Justice Agim also held that report of the House of Representatives which investigated fuel subsidy fraud, relied on by Ubah and his company did not absolve them from “complicity in the massive fraud in the petroleum subsidy payments”.

The appeal court added that since the House of Representatives or any chamber of the National Assembly lacked the power to conduct criminal investigation, its report “cannot be used to prevent or shield any of the petroleum marketer and supply companies from being investigated by competent investigative authority upon a criminal complaint that it fraudulently received billions of naira as imported petroleum subsidy payments when it did not import or market the petroleum in Nigeria.”