Alex Trebek: I Feel ‘Deep Sadness’ in the Wake of Cancer Diagnosis 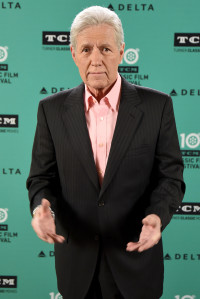 Trying to stay strong. Longtime Jeopardy! host Alex Trebek is doing his best to remain positive as he fights stage IV pancreatic cancer, but keeping his head up is not always easy.

“My oncologist tells me I’m doing well even though I don’t always feel it. I’ve had kidney stones, I’ve had ruptured discs, so I’m used to dealing with pain,” the game show host, 78, told Good Morning America’s Robin Roberts on Wednesday, May 1. “But what I’m not used to dealing with is the surges that come on suddenly of deep, deep sadness and it brings tears to my eye. I’ve discovered in this whole episode, ladies and gentlemen, that I’m a bit of a wuss.” 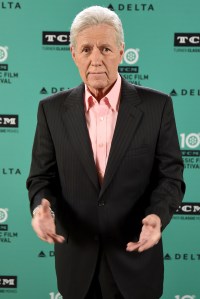 While Trebek does not always feel his best, he said he is “fighting through” the struggles and his doctors are happy with the results. “My platelets, my blood counts are steady,” he continued. “My weight is steady. … The cancer indicators, those are coming down. I’ve got another chemo next week and we’ll do a review and see where things stand.”

The Canadian-American television personality wanted to come forward about the hardships he has faced to let others who are also going through cancer treatment know they are not alone. He noted, “Chemo affects people in different ways and people have to understand that, and that there’s nothing wrong with saying, ‘Hey, I’m really depressed today and I don’t know why.’”

Trebek revealed his diagnosis in early March. He told viewers at the time that he plans to “host Jeopardy! for three more years,” when his contract is set to expire, and added, “Now, normally the prognosis for this is not very encouraging, but I’m gonna fight this and I’m gonna keep working and with the love and support of my family and friends and with the help of your prayers also, I plan to beat the low survival rate statistics for this disease.”

The beloved TV host later thanked fans for their support in an emotional Twitter video. “I won’t be able to respond to all of you individually, but I did want you to know that I do read everything I receive,” he said in the March 14 clip. “And I am thankful for the kind words, the prayers and the advice you have offered. And I’m extremely touched by the warmth you have expressed in your comments to me. I’m a lucky guy.”