Ajimobi imposes levies on churches, mosques, others in Oyo [Details] 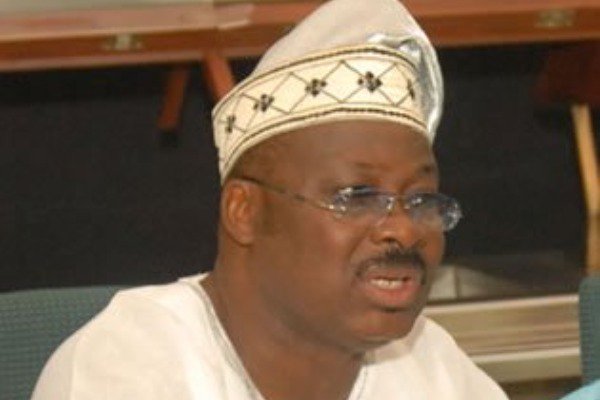 Governor Abiola Ajimobi of Oyo State has imposed levies on religious bodies, manufacturing, trading and other business organisations in the state.

These levies were imposed as part of efforts by the state government to generate funds in order to assist security agencies in their bid to maintain a crime-free state.

The categories of the levies were contained in flyers made available to journalists at an emergency stakeholders meeting conveyed by the state government, which was held at the House of Chiefs, Parliament Building, Secretariat, Ibadan on Tuesday.

At the meeting were the state commissioner of Police, Mr. Abiodun Odude, representatives of the GOC of 2 Division, Nigerian Army, Odogbo Ibadan, Area Commanders, DSS, Customs, NSCDC, NDLEA, chief executive officers of banks and representatives of Manufacturing Association of Nigeria.

The rest are religious bodies including churches and mosques as well as those in other areas who were asked to pay N60,000, N40,000 and N20,000 for classes A, B and C respectively.

The notice said that payment of the above levies are necessary to support the state government to ensure lives and property are protected.

It reads, “This is to certify the general public that OYSSTF, in pursuance of it’s statutory function to continue to assist security agencies, is embarking on the implementation of the law (OYSSTF AMENDMENT LAW 2017) recently assented by His Excellency, Oyo State Governor Senator Abiola Ajimobi.

“Further to the above, the board of trustees of OYSSTF in conjunction with relevant stakeholders, having held several consultations, town hall meetings and discussions preceding the commencement of the law, hereby informs the general public that in accordance with section 11 (4) of the Oyo state security trust fund law 2017 which empowers the government to impose levies and rates on “person” which include residents, individuals, associations and corporate bodies or firms domiciled in the state.

Ajimobi, while speaking said the meeting was convened in reaction to an observation of a noticeable increase in the activities of criminals in neighbouring states and attacks on banks.

The governor, who spoke through his deputy, Otunba Moses Alake Adeyemi, said, “It is common knowledge that before the inception of this present administration, insecurity in form of armed robberies, arson and other violent crimes as well as lawlessness from the nefarious activities of area boys had been the order of the day.

“The prevailing peaceful atmosphere in the state has been the result of the zero tolerance for crime by this administration and also through the commitment of the state government to combating crime through steps such as the establishment of Oyo State Joint Security Patrol Squad code named “Operation Burst” as well as the setting up of the Oyo State Security Trust Fund,” Ajimobi stated. I can confirm that the installation of closed circuit television (CCTV) in black spots and business districts in the city to monitor the activities of criminals has been completed and is now operational.

Chairman of the state Security Trust Fund, Mr. Bayo Adelabu, whose address was read by the Executive Secretary of the trust fund, Mr. Femi Oyedipe, noted that the spate of recent armed robberies on banks and the killing of security personnel in neighbouring states have made it necessary to hold the emergency meeting.