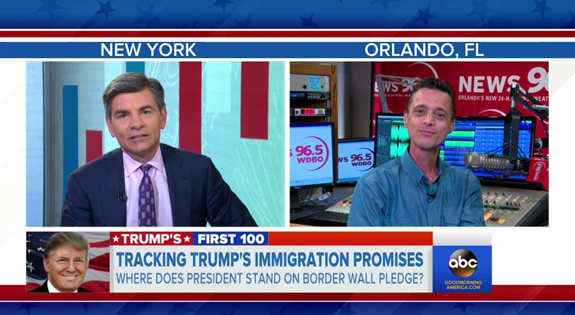 When it comes to daytime TV, viewers become very invested with the people they wake up to.

Sure, they may have never met the faces that grace their small screens day after day. At the same time, there’s a connection the audience has with whoever is hosting their favorite daytime series.

Such is the case for The View where viewers have followed the co-hosts through their ups and downs in the public eye.

In honor of The View‘s 20th anniversary this week, E! News decided to take a look back at just some of the moments when the co-hosts shared huge milestones with the audience at home. All the announcements may have just made viewers feel closer to the chatty ladies of ABC’s long running series.

“Can anyone in the audience see anything different about me?” Jedediah asked as she flashed her diamond engagement ring for the first time. “The only sign that something was up was that he’s always late to get ready. I’m always dressed and he’s taking forever. He was fully dressed an hour early and I was like, ‘Something’s happening.’ I didn’t know what it was, but…He’s stuck with me. Bottom line.” As for who’s the lucky man? It’s Jeremy Scher who chose to propose at a bed and breakfast.

When it was time to celebrate Candace’s big milestone, The View dedicated a whole show to the celebration with plenty of celebrity shout outs and surprises. What propelled the proud mom to tears, however, was when daughter Natasha Bure surprised the birthday girl with a special performance of “Priceless.” “It’s been a great journey…Happy birthday, sweetie!” Candace’s husband Valeri Bure shared. “It’s been awesome, and we’re so happy to be here for you. We love you!”

After the audience began to speculate that something was up with Sara, the co-host decided to let the secret out: She was expecting yet again. “You guys want to know what I’m having? It’s a girl! It’s a girl!” she shared with her co-hosts before being showered with pink silly string. “You guys knew. I’ve been having a rough time so I’ve had like crackers brought out to me and ginger ale. To anyone that’s been in the studio audience, you probably could have picked up on it as well.”

Star Jones Documents Her Journey to the Altar With Al Reynolds

While viewers weren’t exactly invited to the wedding ceremony, Star was more than generous in documenting her road to the altar on The View. Whether discussing her wedding dress from Reem Acra or her venue at St. Bartholomew’s Church, Star couldn’t help but share her excitement at getting married. With a guest list that included Chris Rock, Hillary Clinton, Kelly Ripa, Natalie Cole and more, we’re glad we were given a taste.

When it was time to announce her third pregnancy, Elisabeth didn’t hesitate in sharing the news with The View crew. “It may not be world news but I’m pregnant again so I figured I’d tell everybody now,” she shared during Hot Topics. “We were thoroughly happy with the surprise.” At first, the former Survivor star thought she was just exhausted from the election. Ultimately, she realized the family was expanding.

Joy Behar Announces She Married Steve Janowitz After 29 years Together

Back in September 2011, Joy decided to explain on The View why she married her longtime love after almost three decades together. One of the biggest influences was the fact that gay marriage became legal in New York City. “It did have an influence on me. It brought to my consciousness why gays needed to get married,” Joy explained. “And I thought it was a good reason for me to get married. And so did Steve, so we did it.”

After returning from holiday vacation, Sherri revealed to her co-hosts that she received a proposal over Christmas. “This man not only loves me, but he adores my son and my son adores him,” she shared with the audience. “He got down on one knee Barbara. I’m off the market absolutely.”

One morning, Jenny not only surprised the audience but she shocked her co-hosts when she revealed her boyfriend put a ring on it. “This weekend I was sitting with Donnie and he went into the other room and out came [my son] Evan with cards that said ‘Will you marry me?'” she explained through tears. “I feel like the luckiest girl in the world. He’s so wonderful.”

If that wasn’t a big enough moment, Donnie also surprised his leading lady on set during the announcement. They remain happily married today.

Back on May 13, 2013, Barbara told the studio audience and viewers at home that she would in fact be retiring. “I have been on TV continuously for over 50 years,” she began. “In the summer of 2014, a year from now, I plan to retire from appearing on television at all. It’s been an absolute joyful, rewarding, challenging, fascinating and, occasionally bumpy, ride. I wouldn’t change a thing.”

She added, “I’m not walking into the sunset, but I don’t want to appear on another program, climb another mountain. I want to instead sit in a sunny field and admire the very gifted women—and OK, some men too—who will be taking my place, and most of all, I want to thank everybody here.”