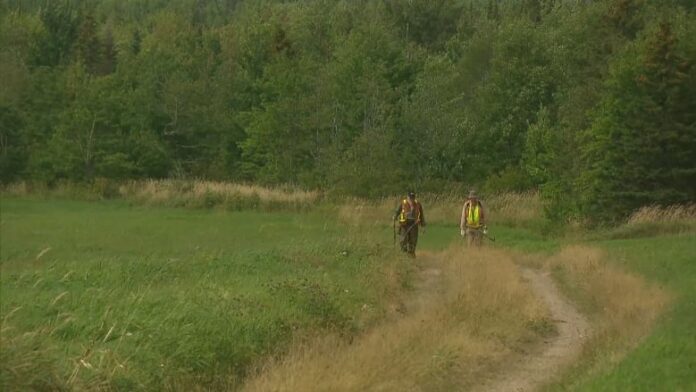 Hazel Clark, 87, was found alive by searchers Tuesday evening, 56 hours after she was last seen at her home on the Springhill Road in Havelock, N.B., about 50 kilometres west of Moncton.

Her daughter, Mary Black, confirmed she was found alive and taken to hospital.

“They found her about a mile from the house here on a dirt road about 15-20 feet of of the road,” Black said.

“From what I understand, one of the rescue dogs have scented her and found her.”

Black thanked police and the search and rescue teams for their help locating her mother.

“We would just like to thank the whole community for all the food, your thoughts, your prayers, your visits and calls, it’s been wonderful,” she said.

“She was responsive, but as a precaution they took her to the hospital just to get her checked,” she said.

Black is at the hospital with other family members.

She said her mother lost her glasses, teeth and one shoe, but seemed to be alert and OK when she was found.

Clark was last seen in the front yard of her home on Springhill Road at around 10 a.m. on Aug. 25 by her son, Charles.

When another daughter arrived at 6 p.m. that day, there was no sign of their mother.

Clark was reported missing that night by her family.

As the family waited, RCMP, the force’s dog service, and the Tri-County, Greater Fundy, York Sunbury and Miramichi ground search and rescue teams searched the area.

On Monday, RCMP received information she may have been walking on Route 880, but they later determined this wasn’t Clark, but another person.