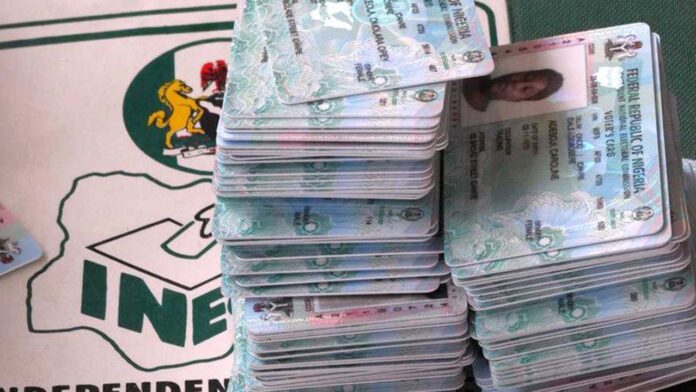 A non-governmental body, the International Society for Civil Liberties and Rule of Law (Intersociety), has frowned at the recent decision of the Independent National Electoral Commission, INEC, to shrink the time for collection of permanent voters cards (PVC) to only 26 working days.

Independent National Electoral Commission (INEC), on Saturday, announced December 12, 2022, to January 22, 2023, as dates for the commencement and end of the collection of permanent voters cards.

The electoral body made the announcement on Friday via a statement by the National Commissioner and Chairman of, the Information and Voter Education Committee, Festus Okoye.

According to the statement, the commission has also resolved to devolve PVC collection to the 8,809 Registration Areas/Wards across the country between the 6th and 14th of January 2023.

However, Intersociety, in a release described the decision by the electoral umpire as dictatorial, inconsiderate, and totally unacceptable, after a thorough analytical assessment and research.

The press release, signed by the Board Chairman, Emeka Umeagbalasi, Head, of Democracy and Good Governance, Chinwe Umeche Esq., Head of, Campaign and Publicity department, was forwarded

According to the organization: “The grand implication of INEC’s announcement is that PVC can be distributed for a period of only 26 working days or less.”

The twenty-six working days were calculated and arrived at by Intersociety after deducting 14 days.

“The deducted 14 days involves seven days of Christmas holiday or 24th to 31st December 2022 and seven days of New year holiday or 1st January to 7th January 2023. The Golden Rules guiding these two are universally strong and complaint that important offices and major social activities are not only grounded but also the two seasons are occupied with social outings including meetings, religious and traditional activities, communal general meetings, naming ceremonies, marriage ceremonies, the dedication of new houses etc.”

Continuing, the statement averred: “During the two periods, top officials of INEC and their foot staffers are hardly found in their offices and written correspondences meant for staff of the nation’s electoral umpire hardly received and attended to.

Distribution of PVCs in Yuletide and New Year aimed at disenfranchising millions of voters.”

Intersociety, however, claimed that the INEC, deliberately scheduled the collection of voters cards during the festive period to frustrate and disenfranchise millions of registered voters from picking their PVCs.

The statement noted: “This is more so when many southerners residing outside their ancestral abodes travel home for the two globally acknowledged popular seasons or holidays.

“A sensible, reasonable, and unbiased electoral umpire would have skipped the 14 days and added or brought them forward into the last week of January 2023 and the third week of February 2023.